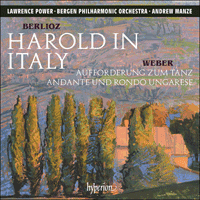 Harold in Italy & other orchestral works

‘Wine, blood, joy and rage mingle in mutual intoxication and make music together’ was Berlioz’s (impractical) description of the finale of ‘Harold’: he would surely have rejoiced in this impassioned performance from Lawrence Power, Andrew Manze and the Bergen Philharmonic.

‘Power’s mellow tone makes for a poetic reading as the Byronic brooder, his echo of the opening theme as delicate as gossamer … Hyperion doesn’t place the viola too far into the spotlight. Berlioz would have approved’ (Gramophone)
‘Altogether it’s an exciting, intriguing reading, not least because of Lawrence Power’s notably lyrical, eloquent playing; you really feel this is an individual voice’ (BBC Music Magazine)» More

‘There's absolutely no lack of dramatic impact … the Bergen players rising to those exultant climaxes, and Manze is excellent at delivering the calmer beauty of the 'Serenade' … the balance between solo viola and orchestra is close to ideal, I think, well-integrated, not too soloistic … good sound’ (BBC Record Review)

When Berlioz won the Prix de Rome in 1830, he did everything he could, and pulled every string he could lay his hands on, to be given exemption from the prizewinners’ obligatory period in Italy and to be allowed to draw his grant in Paris; he got Meyerbeer and Spontini to write on his behalf, and even had his doctor attest that the hot climate of Rome would be injurious to someone with his tendency to nervous disorders. Winning the prize was a vital first step on the ladder, but to leave France at that moment in his life was the last thing he wanted. He was engaged to the pianist Camille Moke but the situation was precarious and required his presence on the scene; his career in Paris was at a crucial point, with the premiere of the Symphonie fantastique about to take place, and the possibility of an opera commission. In any case, given the low state of Italian musical culture, what benefit could there be for a budding composer to go there? For artists and architects who won the Prix de Rome, the advantage was obvious; but for musicians!

In the event, the time Berlioz spent in Italy would prove of immense benefit. True, he composed very little while he was there: the overtures King Lear and Rob Roy; the song La captive in its original strophic form (later developed into a through-composed piece for mezzo-soprano and orchestra—the version included on this disc, with the voice part taken by solo viola); the Méditation religieuse (which became part of the later Tristia); and the revision of the slow movement of the Symphonie fantastique. But in many other ways his sixteen months in Italy and his wanderings in the Roman campagna and in the foothills of the Abruzzi mountains were a blessing. They were the perfect antidote to the shocks and tensions of his student years; they gave his nervous system its much needed respite, a precious time of fruitful idleness.

More than this, his Italian journey laid the foundation for many of his later compositions. The Virgilian associations of the country he walked over and the sea he looked down on from the hills fed the great opera, Les troyens, that he would write twenty-five years later. More immediately, his dramatic symphony Roméo et Juliette began to take shape under the blue Italian sky. Even the bad aspects of Italian culture had positive consequences: the Berliozian concept of church music as the ‘soul’ of the building it is performed in, manifested in his Requiem and Te Deum, received fresh impetus from the discovery that the grand interior of St Peter’s was served by a choir of eighteen voices and a small organ on wheels; and the squalor and decadence of the modern Roman Carnival inspired, by reaction, his vision of its Renaissance counterpart and of an Italy where Art was no longer ‘the lovely Juliet stretched upon her bier’ but the equal of Nature—a vision that gave rise to the vivacity and richness of colour of his opera Benvenuto Cellini. Most directly, his delighted response to the beauties of the Italian landscape and the life of its rustic inhabitants found expression, soon after his return to Paris, in his second symphony, Harold en Italie.

The work’s Byronic title is more than just a gesture to fashion. Identification with the author of Childe Harold’s Pilgrimage was common among the French Romantics, but this was different. Byron is a presiding genius over Berlioz’s Italian journey. It began with an encounter with a Venetian sea-captain who claimed to have commanded the poet’s corvette on his journeys through the Adriatic and the Greek islands. In the months that followed, Berlioz’s imagination would often give a Byronic slant to what he did or thought. His plan on learning that Camille had jilted him—to rush back to Paris, gain access to her house disguised as a lady’s maid and kill her—is an authentic touch worthy of Byron’s Don Juan (fortunately he got no further than Nice). During the dog days in Rome, to escape the unbearable heat, he liked to go to St Peter’s, taking with him a volume of Byron, and:

settling myself comfortably in a confessional, enjoy the cool of the cathedral in a religious silence unbroken by any sound but the murmur of the two fountains in the square outside, wafting in as the wind stirred momentarily. I would sit there absorbed in that burning verse … I adored the extraordinary nature of the man, at once ruthless and of extreme tenderness, generous-hearted and without pity.

Harold en Italie originated in a request from Paganini for a concerto featuring the Stradivari viola he had recently acquired. But when that idea had been abandoned and replaced by a symphonic work inspired by Berlioz’s Italian wanderings, the solo viola, cast in a less soloistic role, became (in Berlioz’s words) ‘a kind of melancholy dreamer in the style of Byron’s Childe Harold’—an observer standing apart. The ‘Harold’ theme preserves its identity unchanged, no matter what is going on around it (in this respect it is the opposite of the idée fixe in the Symphonie fantastique). At the same time, it is through the consciousness of this observer that the scenes of Italian life and nature are presented: the theme, as well as recurring constantly throughout, is the source from which much of the work’s thematic material is derived.

The first movement (‘Harold in the mountains. Scenes of melancholy, happiness and joy’) opens with a darkly chromatic fugato passage, beginning on cellos and basses, with a plaintive bassoon and oboe counter-subject. Woodwind add a melancholy tune which will be revealed as a minor-key version of the ‘Harold’ theme. The music rises to a grand, cloudy fortissimo, after which the fugato resumes, culminating in a flourish, whereupon the texture clears, G minor becomes G major with the effect of sudden sunshine breaking through, and harp arpeggios introduce the soloist and the main theme, a long, open-hearted melody with a touch of melancholy. The theme, restated in slightly shorter form and in canon, richly scored, leads to an allegro, in 6/8 time and with an easy, swinging gait (speed is reserved for the coda). The sprightly second theme only feints at the orthodox dominant key; and, once the exposition of the musical material has run its course, the formal elements (development, recapitulation, coda) merge in a continuous process, in which the cross-rhythms and superimposed metres that are a feature of the work are prominently displayed.

The second movement (‘March of pilgrims singing the evening prayer’) moves in a single arc (pppp to f, then back to pppp) which contains three musically developed ideas: the procession’s approach across the evening landscape and its disappearance into the dusk, the gradual change from day to night, and the curve of feeling in the solitary observer of the scene, from contentment to angst and isolation. The musical materials are a broad E major theme, variously harmonized, above a trudging bass; two bell-like sonorities which recur constantly (a tolling C natural on horns and harp and a thinner, brighter sounding B on flute, oboe and harp), a fragment of chorale, and the comments of the solo viola, first with the ‘Harold’ theme, then as a series of arpeggios played on the bridge of the instrument. In the long final diminuendo the bell note and the march theme (pizzicato strings) grow fainter and fainter until only the viola is left.

The idea for the third movement (‘Abruzzian mountain-dweller’s serenade to his mistress’) came from the music of the pifferari, strolling wind players whom Berlioz encountered during his stay. A rapid, skirling tune on oboe and piccolo above a drone bass, accompanied by a persistent rhythm on the orchestral violas, gives way to an allegretto half the speed, whose cor anglais melody is embellished by other woodwind and then combined with the (thematically related) ‘Harold’ theme. The allegro is then briefly repeated, after which the music and tempos of the two sections are combined, while, high above, the ‘Harold’ theme rings out on flute and harp.

The setting of Jean-Paul-Égide Martini’s Plaisir d’amour (to a poem by Jean-Pierre Florian, an eighteenth-century author of romantic tales that Berlioz was much addicted to in his childhood) was made in about 1859, for a small orchestra of flutes, clarinets, horns and strings, the voice part here taken by solo viola.

Weber’s Andante und Rondo ungarese dates from 1809, during his years in Stuttgart. Although it was not published until 1938 with a piano reduction by Georg Schünemann, it appeared in 1816 with the solo part arranged for bassoon as Weber’s Op 35. The piece is better suited to the viola, having been written for his half-brother Fridolin, violist in the Hamburg orchestra, who had asked Weber for music to insert in a pasticcio based on Haydn’s opera La fedeltá premiata.

Berlioz was a devoted admirer of Weber. When he agreed, much against his will, to adapt Der Freischütz for the Paris Opéra in 1841—to save it from the mutilations previously inflicted on it—one of the things he did was to orchestrate Weber’s popular piano work Aufforderung zum Tanz (‘Invitation to the dance’) for the obligatory ballet (the director had suggested using movements from Berlioz’s symphonies, to which he received an indignant ‘No!’). He moved it up a semitone, from D flat to D, but otherwise took care not to intrude his own personality but rather to present the music as Weber might have done if he had written it for orchestra twenty years later. The male dancer’s opening (and closing) phrases are given to a solo cello, the female dancer’s replies to clarinet. In the main allegro vivace section brilliant, energetically scored tuttis (though trombones are held back till near the end) are contrasted with elegant string writing, flashing woodwind unisons, and passages where piccolo and flute and the tang and glitter of harps are piquantly combined.