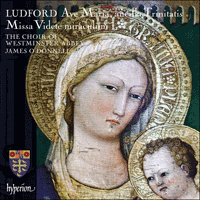 Nicholas Ludford’s music is by no means eclipsed by that of his more famous near contemporaries (who include Tallis and Taverner). That such wonderful works—virtually forgotten for nearly half a millennium—can once more be heard is cause for heartfelt gratitude. 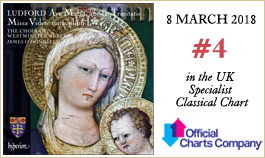 ‘O’Donnell encourages really graceful long-arced phrases from his trebles and maintains an overall more consistent tone [in the Mass]. The finest singing on this disc, however, is undoubtedly Ave Maria, ancilla Trinitatis: an exceptional work and a superb performance. The choir are heard at their finest in the more impassioned moments, of which this votive antiphon offers many’ (Gramophone)
‘James O'Donnell and the Westminster singers really understand this music and make a fine case for Ludford being a true (if neglected) master of polyphony … their greatest skill is shown in their handling of the intricacies of the Videte mass, with its ecstatic running exchanges at 'Domine Deus' in the Gloria and the ethereal visions of the Agnus Dei’ (BBC Music Magazine)

In the final years of Mary Tudor’s short reign, a potent distemper was taking grip across England; an illness which would claim the lives of over five per cent of the population, including prominent composers, politicians, clerics, and perhaps even the Queen herself. Writing his will in March 1557, the ageing composer Nicholas Ludford may well have reflected with both despondency and considerable satisfaction on a life he had spent at the epicentre of English musical and religious ceremony over a period encompassing the greatest ecclesiastical and political upheavals in the country’s history. These were the final months of Mary’s Catholic revival and, approaching his deathbed, Ludford characterized his credence through an unwavering affinity with the past he had served devoutly as verger and organist at St Stephen’s Chapel in the Royal Palace of Westminster, by bequeathing his soul ‘unto allmyghtye god … through the merytyes and passion of oure lorde Iesu Chryste and to hys Blessyd mother Sayncte marye and all the holly company of heven’.

Such devotion to ‘Sayncte marye’ echoes the intensity of the English Cult of Mary, which reached its apogee during the period of Ludford’s employment in Westminster. Indeed, votive liturgy to Mary would have occupied the major part of Ludford’s musical activity here. Accordingly, the present collection represents three archetypes of English sacred polyphony expressed in Marian worship: the daily Lady Mass (tracks 1-20), the votive antiphon (tracks 21-23) and the festal Mass for a Marian feast (tracks 24-39). Whilst the music here was likely composed for use at the Royal Palace, the shared employment of singers and the movement of choirs and organists between institutions in Westminster suggest that the same music may have been performed at St Margaret’s Church or in the Lady Chapel of Westminster Abbey itself.

Ludford was resident in Westminster by 1517 and is recorded at St Stephen’s in 1524 with his formal contract of employment dated 30 September 1527. Around this time, Ludford established permanent residence on Longwolstable Street, immediately north of the Palace walls, roughly on the site of the iconic Elizabeth Tower (which houses ‘Big Ben’). Following the dissolution of the college and chapel in 1547, the employees of St Stephen’s were pensioned off, and Ludford was able to fortify his connections with the Parish Church of St Margaret (in the shadow of the Abbey and St Stephen’s) where he and his wife had hired a pew since 1525. Ludford became churchwarden here for a two-year period from May 1552, and following his death in August 1557, was buried close to his first wife Anne, in the vaults of the church. A little more than a year later, the same setting would provide the resting place for fellow composer John Sheppard (c1515-1558), and in 1574, for Robert White (c1538-1574).

The chronology of Ludford’s œuvre is not straightforward, though it’s likely that his surviving music was all composed prior to 1530, thus providing a useful connection between the earlier style of Robert Fayrfax (1464-1521) and the progressive John Taverner (c1490-1545) and John Sheppard. Ludford’s music is perhaps more florid and melismatic than that of Fayrfax, and the composer is particularly attentive to the control of timbre and variety through alternating combinations of vocal groups. For Tudor composers, the management of voices through the daily liturgy conceals a potential dichotomy: the demand for an ornate, elaborate musical style on the one hand, and an obligation to nurse the stamina of singers (particularly trebles) on the other. Of course, much pre-Reformation church music already belonged to a culture of ‘alternatim’ performance, where plainchant and polyphonic verses are exchanged between distinct groups of singers or soloists. But the demand for ornate polyphonic music had grown in conjunction with the development of Lady Chapel choirs serving the daily Lady Mass, and so it was inevitable that a distinct style of polyphony would evolve—one that attended to both of these demands. With its doubled choruses of principals emulating the choir, the Tudor organ was central to this development, and by the start of the sixteenth century was performing a significant role in the Lady Mass at major institutions across the country. For example, in 1502, on the death of Prince Arthur (Henry VII’s eldest son) at Ludlow: ‘the Bishop of Chester song our Ladye’s Masse, which was song with children, and prickt songue [written polyphony] with organes.’ The significance of the organ at St Stephen’s is evident from the dissolution inventory which records ‘iij payer of organs in the upper chapell’ and ‘one old payer of organs in the nether chapell’.

Rhythmic melodies known as ‘squares’ were assembled over the course of the fifteenth and early sixteenth centuries to provide memorable musical material for such regular services. These melodies were extracted from earlier polyphonic compositions, recycled, and arranged to facilitate the performance of the daily ferial Mass, cultivating ‘alternatim’ performance practices between vocal polyphony (in three parts), and organist, who would improvise alternate versets ‘upon the square’. The survival of a complete cycle of seven Lady Masses by Ludford (in four partbooks now in the British Library) is unique. Ludford employs a distinct Kyrie ‘square’ for each Mass (for the Ordinary items), with a soloist’s partbook providing alternating monophonic versets upon which to improvise (Kyrie, Gloria, Credo) at the organ, together with the relevant plainchant, which was either sung or played. The leather binding of these partbooks is embossed with the arms of Henry VIII and Catherine of Aragon, and the books were catalogued in the Royal Library at Westminster as early as 1542 (‘Bookes of priksong masses foure’), strengthening their association with the Royal Palace.

The Kyrie ‘square’ used by Ludford for his Tuesday Mass (Feria iii), has a complex history, being extracted from a chanson twice attributed to Dufay in continental sources: Or me veult bien Esperance mentir. Numerous survivals, including some keyboard versets designated ‘Kyrie’, attest to the popularity of this ‘square’ across England, and one such example provides music for the first and third verse in the present recording. Contemporaneous sources such as this appear to crystallize an improvised language for two-voice ‘bicinia’ upon the square, and have informed the modern invention of the remaining versets to complete the alternating organ/choir structure of this ninefold Kyrie.

In addition to the Mass Ordinary items ‘upon the square’, Ludford provides the music for the Proper cycles. The Alleluia and the Sequence are each based here on their customary Sarum plainchants, though now alternating the vocal chant led from the soloist’s partbook with two- or three-part polyphony. ‘Alleluia. Ora pro nobis’ is attached to the same Tuesday Mass (Feria iii) as the Kyrie, and the Sequence ‘Hac clara die turma’ is that designated for Thursday (Feria v). The regular Offertory ‘Felix namque’ and Communion ‘Beata viscera’ also appear in the soloist’s book, where they would have provided the basis for organ improvisation, or vocal plainchant at the designated place later in the Mass.

The jewel in the crown of late-medieval English polyphony is undoubtedly the repertory of votive antiphons to be sung at the conclusion of Compline at the end of the day, and represented most lavishly through the music of the Eton Choirbook. Whilst Ludford was too young to feature in this great collection, we are fortunate for the survival of the Peterhouse Partbooks (Cambridge, University Library, Peterhouse MSS 471-74) which, despite missing a tenor book, enable the reconstruction of a number of Ludford’s Marian works. One of these, Ave Maria, ancilla Trinitatis, is based on a prayer found in some fifteenth-century primers. Each line of text begins with the salutation ‘Ave Maria’, ending with a superlative, and supplemented at the very end with a personalized petition for Mary’s mediation. Ludford decorates certain apposite words with extended melismas and emphasizes the imploration of the text by varying vocal combinations for every two or three lines. In a sonic representation of the angelic host, Ludford first joins the full choral force at the text ‘angelorum’, introducing a cantus firmus also found in his Missa Inclina cor meum Deus. In the context of the antiphon, the relevant plainsong fragment, ‘Inclina cor meum Deus: In testimonia tua’ (‘Incline my heart, O God, to your testimony’—a short ferial Responsory for Terce), appears in each of the three full passages; twice in the first and third, and once in the second.

Missa Videte miraculum is the most celebrated of Ludford’s works, surviving in a single source connected to St Stephen’s, the Caius Choirbook. The plainchant ‘Videte miraculum’ is the Vespers Respond for the Marian feast of the Purification (Christ’s presentation in the temple, otherwise called Candlemas). This six-voice setting includes two treble parts of equivalent range, generating an opulent texture with expanded tessitura. Rhythmic intricacy in the treble-writing (‘Domine Deus, Agnus Dei’ in the Gloria), and frequently high tessitura (both instances of the Osanna), are both testament to the standard of choirboys at Ludford’s disposal. Unusually, the cantus firmus migrates from one voice to another between sections in each movement. Again, Ludford’s sensitivity to the text is characterized by the use of distinctive vocal groupings, reduced and reassembled to give resonance to particular words, such as the intimate diminution of voices and tessitura at ‘Et incarnatus est’, moving to a lower grouping at ‘Crucifixus’, and in the Gloria the excited re-accumulation of vocal forces, one by one, from ‘Cum Sancto Spiritu’ to the final Amen. The composer introduces an alternative cantus firmus for the Agnus Dei, now adopting the verse (‘Haec speciosum’) for the original Respond, though retaining the same head-motif as the other movements.

Ludford’s surviving music is unusual in representing the complete gamut of liturgical activity encountered at St Stephen’s Westminster in the 1520s, from the day-to-day polyphony and organ improvisations of the ferial Mass, to the expansive, decorative style of the festal Masses. Whilst Mary I’s death emphatically ‘shut the door’ on Marian worship, the survival of this music provides a priceless window into a musical past, and challenges us to reimagine this music as a component of a living liturgical tradition, cultivated through its own hermeneutics. Central to its expression was the symbolism of space within the liturgical act, elevating a soundscape fashioned precisely to glorify Mary as mediator, and filling her metaphorical body (the Chapel) with a living word. In this symbolic act, and surrounding the ‘host’, the choir and organist were striving not only to evoke the presence of Christ, but to become an authentic part of the celebration of his very substance.