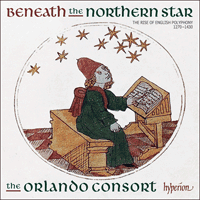 Beneath the northern star

This new album from The Orlando Consort charts the radical development of music between the late thirteenth and mid fifteenth centuries—the transition from what is at essence embellished chant to the extraordinary mathematical intricacies of experimental polyphony. 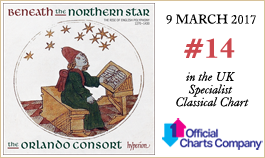 Much early English sacred music is notoriously difficult to date in better than general terms; nevertheless, this anthology can be said to cover just under two centuries, with the earliest piece dating from around the middle of the thirteenth century through to those by Dunstaple which seem unlikely to have been written after about 1430. Unsurprisingly, the variety of styles is wide, ranging from the distinctively English version of the Ars Antiqua through to the development of the so-called ‘contenance angloise’ which had so much influence on Continental music from the 1440s onwards.

Alleluia. Christo iubilemus, the oldest piece here, illustrates how chant could be extensively decorated for a festive occasion like Christmas. For most of the time, the underlying plainsong is sung by the tenor while the other two voices decorate around it. However, during the verse ‘Dies sanctificatus’ a further layer of elaboration is added as these voices slip in extra text, a practice known as troping. As a final touch, the liturgical portion of the piece is introduced by a lively section based on the rondellus principle, whereby phrases are sung three times in different permutations of voices.

Rondellus is recognized as a typically English technique, and seems to have been used over a significant period of time. Certainly it is still present in music from the manuscript which contains the short setting of Stella maris nuncuparis, which dates from somewhere around 1300 and seems to have emanated from Meaux Abbey. Here, however, the impression is simpler, with the repetitions and obsessively repeating cadences making for an almost hypnotic effect. This manuscript also includes more complex pieces, such as the double-texted motet Spiritus et alme / Gaude virgo salutata. Spiritus et alme is best known as a Marian addition to the Gloria and the voice which carries it follows a decorated version of its normal chant melody; the second text is associated with the Annunciation.

One of the most audible features of this repertory is the amount of parallel harmony—not merely the 6–3 chords which are regarded as typical of English music of the time, but also parallel fifths and octaves which suggest a more archaic style. These are particularly obvious in the conductus-like Ave mundi rosa, even though this is probably later than the previous two pieces. The text is divided in six paired verses, each pair set to the same music, a format which might suggest a parallel with the sequence.

Parallel harmonies also dominate the Kyrie Cuthberte prece, a setting which clearly emanates from Durham where the cult of St Cuthbert was especially strong. Its sole surviving manuscript presents intriguing performance problems; for example, the listener will be aware of a wealth of chromaticism reflecting manuscript accidentals which are difficult to interpret with complete certainty. Also, one would normally expect nine invocations, three for each of the Persons of the Trinity, whereas here the Holy Spirit only receives two; yet the structure of the manuscript appears to rule out further music which might have been lost. In any case, despite the natural structure of the text, its eight verses are grouped in pairs, each pair with the same music.

The earliest piece here with a definite ascription is the conspicuously showy isorhythmic motet Sub Arturo plebs / Fons citharizancium / [In omnem terram] by Alanus, which is also the only one so far to show significant Continental influence. As is normal with the genre, it is built up in layers from the tenor cantus firmus, with the two other voices carrying different but connected texts. In this case, the middle voice traces the story of music from the book of Genesis, through the theory of Pythagoras, Boethius and others, and the teaching of Pope Gregory the Great. Finally, in the text set to the top part, the composer lists outstanding English musicians of his time, amongst whom he modestly includes himself. Alanus stresses his own ingenuity in passages which involve intricate rhythmic interference between the voices.

At present, we cannot identify exactly who Alanus was, though he may have been the John Aleyn who was a chaplain in the court chapel of Edward III and who died in 1373. Assuming Sub Arturo plebs was written some time around 1370, that would place it as a natural forerunner of the isorhythmic music in the Old Hall Manuscript, by far the largest and most important surviving source of English sacred repertory from the late fourteenth and early fifteenth centuries. Of its nine isorhythmic motets, which date from perhaps forty or more years after Alanus, two follow here, Damett’s Salvatoris mater pia and Byttering’s En Katerine solennia, both clearly associated with Henry V.

Salvatoris mater pia / O Georgi Deo care / [Benedictus Mariae Filius] by Damett (?1389/90–1436/7) carries, in its top voice, a Marian text into which has been interpolated an intercession for Henry and, in its middle voice, a call on St George to pray for the protection of the English people. This fits well with what we know of the composer, whose name appears in royal household accounts during the campaign against the French. Though Byttering’s identity is more problematic, he is likely to have been close to court circles at much the same time. His motet En Katerine solennia / Virginalis concio / [Sponsus amat sponsam] sets texts about St Catherine over a cantus firmus based on a chant for her feast day, and is one of a group of pieces from the period which can be connected with that saint, the others being Dunstaple’s isorhythmic motet Salve scema sanctitatis and an anonymous Gloria based on the chant Virgo flagellatur. Presumably some or perhaps all three have connections with the marriage in 1420 of Henry and Catherine de Valois.

Despite the presence of various types of motet, the bulk of the Old Hall repertory consists of settings for the Ordinary of the Mass, and the enormous range involved bears witness to the rich mix of styles available at the time. At the simplest level, we find Chirbury’s Agnus Dei, one of four short surviving pieces by this shadowy composer. With its ancestry in old-fashioned conductus, this is representative of a body of so-called ‘English discant’ music, straightforward and moving largely in block chords; yet, archaic as it sounds, its curious chromaticism lends it a certain distinctiveness. Another common type is the so-called ‘cantilena’ style in which the three parts move freely against each other, but with a tendency for the top voice to take precedence. The Gloria by Gervays is typical, even if The New Grove writes it off rather brutally as ‘unpretentious but competent’. More substantial, perhaps, is Excetre’s Credo which, apart from its greater melodic and rhythmic enterprise, is one of the first settings to contrast two- and three-voice sections, a feature which soon became normal in English Mass movements. Though nothing is known for certain about either composer, both these works are entirely consistent with the main repertory of the manuscript.

At the extreme end of the Old Hall repertory lies a handful of self-consciously intricate settings, many of them by Leonel Power (?before 1385–1445), which recall the music of the late fourteenth-century French Mannerists. Apart from its unusually florid top line, parts of the particular setting of the Credo recorded here involve a remarkable degree of chromaticism, with the result that there are some very strange cadences—see, for example, the close at ‘ante omnia secula’, which is difficult to believe aurally, but seems the only way to interpret the manuscript. Immediately after this there is a passage where four short notes in the top voice run against three in the other two, to unsettling effect. The Gloria which follows avoids the eccentric chromaticism but sometimes surpasses the Credo in rhythmic complexity—see, for example, the second ‘Qui tollis’ where in the manuscript the composer supplemented the normal black and red with blue notation in order to indicate his intentions.

Quirky as these settings may seem, they are of course designed to show Leonel’s virtuosity as a composer. Elsewhere, we find that he cultivated most of the styles represented in Old Hall, right down to the simplest discant. Significantly though, he seems to have abandoned such excesses later in his career, following an unmistakable trend, perhaps beginning around 1420, towards an altogether smoother style. This is apparent in, for example, the elegant melodic lines, gentler rhythms and careful regulation of consonance which characterize the Gloria by Leonel’s more famous younger contemporary, John Dunstaple (c1390–1453). It is also instructive to compare Dunstaple’s isorhythmic motet Dies dignus / Demon dolens / Iste confessor with the earlier examples. The basic method may be similar—two voices, each having its own text, woven around a tenor which is repeated using decreasing note values. Gone, however, are the passages of metrical interference; instead, Dunstaple’s aim is clearly for refinement of flow, only minimally broken by local incidents. As with several of his isorhythmic motets, the words of Dies dignus honour a specific saint, here St Germanus of Auxerre, who had a notable influence on Christianity in fifth-century Britain. In particular, he was largely responsible for initiating the cult of St Alban, with whose eponymous city and abbey Dunstaple is known to have had close connections.

Hindsight shows that it was this new style which became recognized by Continental theorists as bringing about a general change in direction, particularly in the work of Dufay, Binchois and later composers. In this respect, perhaps the most advanced piece recorded here is the first of the two anonymous Credo settings which close this album. Added to the Old Hall Manuscript somewhat after its main repertory, it already exhibits most of the features associated with the mature mid-fifteenth-century English manner. Entirely typical are the gently undulating melodic lines and flexible rhythms, and the subtle interplay between the parts. As had become normal, the movement is divided into two main sections, the first in triple and the second in duple time with, as commonly happens, a return to triple time at the very end. In order to facilitate smoothness of effect, the setting is predominantly melismatic rather than syllabic; and, so that the piece does not become excessively long, the text is telescoped, different sections being sung at the same time.

To complete this anthology, we return to the main part of the Old Hall Manuscript (though supplemented, because of a lost page, from a source associated with Fountains Abbey) for another anonymous Credo setting. On the most obvious level, this is an invigorating setting full of the sort of jaunty rhythms found in Excetre’s Credo; however, after a brief canonic opening for the two high voices, the bulk of the piece is built around an intriguing structural device based on the Latin inscription attached to the tenor part. Essentially, this decrees that its three sets of six notes are to be sung first as they stand, then in reverse, and finally again as written. Since the piece is isorhythmic, the entire process is repeated but with the note-values halved. If this all sounds rather cerebral and not the sort of thing that the average listener would hear, we might remember that the unknown composer would have expected an all-knowing deity to approve his ingenuity. As would be true with the rest of this collection, he would surely have regarded his artifice as part of the process of glorifying God.