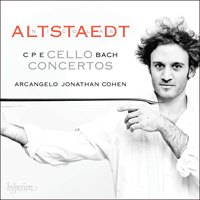 The unpredictable and ‘fantastical’ qualities which are so fundamental to the music of C P E Bach are here given free rein by Nicolas Altstaedt, aided and abetted by Jonathan Cohen and Arcangelo in performances of astonishing brio. 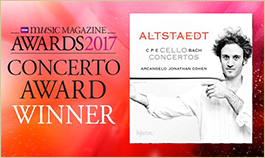 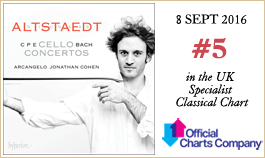 ‘Nicolas Altstaedt captures their freedom of thought with infectious spontaneity. Period-instrument ensemble Arcangelo, conducted by Jonathan Cohen, radiates the heat and energy of music conceived in the furnace of the Classical era’ (Financial Times)» More

‘Alstaedt plays without vibrato. His tone is handsomely svelte, slightly nasal and often as smooth as hazelnut gelato’ (The Washington Post)» More
'Nicolas Altstaedt, one of a new generation of young soloists who happily move back and forth between period and modern performing styles, acquits himself well, although at times I wish he would allow himself just a bit of vibrato … Arcangelo provides the excellent accompaniment' (MusicWeb International)» More
‘I found this disc completely entrancing, especially as Altstaedt, Arcangelo and Jonathan Cohen really bring out the music's variety and vigour, playing with vividness which is completely engrossing’ (Planet Hugill)» More
‘If any disc can persuade you that C.P.E. Bach is far more than a ‘niche’ composer, it is surely this one … unmissable!’ (The Europadisc Review)» More
‘Bach delights in unexpected contrasts, and Altstaedt, with his slashing, vibrato-free lines, plays them up to the maximum’ (AllMusic, USA)» More

‘We have only one Bach, whose manner is entirely original and peculiar to him alone.’ To us this could only mean Johann Sebastian. But not in 1774, when the composer J F Reichardt penned these words. A quarter of a century after his death, Johann Sebastian’s music, while not quite forgotten, seemed marginal or irrelevant. And except perhaps in England, where Sebastian’s youngest son, Johann Christian, held sway, the ‘great Bach’ invariably denoted J S’s second son Carl Philipp Emanuel, revered by Haydn and Mozart and widely acknowledged as one of the supreme composers of the age.

In his lifetime Emanuel Bach presented something of a contradictory figure: harpsichordist to the flute-loving Frederick the Great who was perfectly capable of turning out galant trifles, yet in the works written for his own pleasure quickly acquired a reputation for ‘bizarrerie’; and, later in life, Kantor in Hamburg who produced ephemeral odes and cantatas to order while allowing his genius free rein in some of the century’s most original symphonies and keyboard works.

Emanuel Bach’s most personal music represents the pinnacle of Empfindsamkeit, the cult of ‘heightened sensibility’ practised by a group of North German composers in reaction to the rational, empirical strain in Enlightenment thinking. This celebration of pure feeling was related to a whole aesthetic movement whose literary manifestations included the novels of Samuel Richardson, Laurence Sterne (to whose antic prose C P E’s music was often compared) and Jean-Jacques Rousseau. The credo of Empfindsamkeit was that music should ‘touch the heart’ and ‘awaken the passions’. In lesser hands this could lead to cloying sentimentality. But in Bach’s finest sonatas and orchestral works, halting, sighing phrases, explosive disruptions and disorienting harmonies combine to produce music unlike anything else composed in the eighteenth century.

Born in Weimar, Emanuel grew up in the musically rich atmosphere of Leipzig, where, as he noted in his autobiography of 1773: ‘I had from an early age the special good fortune of hearing the most excellent music of all kinds all around me.’ He quickly excelled on the harpsichord; and by the age of eleven he could apparently play any of his father’s keyboard pieces at sight. Like Handel and his own godfather Telemann, Emanuel initially studied law. Then, after graduating in Frankfurt an der Oder in 1738, he received what he termed ‘an unexpected and gracious summons … from the then crown prince of Prussia’, the future Frederick the Great.

Frederick, who succeeded his father, Frederick William I, in 1740, was the eighteenth century’s most paradoxical monarch: on the one hand a ruthless potentate whose military adventures became the model for later German expansionism; on the other a Francophile son of the Enlightenment, an avid social reformer, and a musician who made the pastoral flute the must-play instrument of the European gentleman amateur. Emanuel Bach would remain in his service for nearly thirty years.

As harpsichordist at Frederick’s court, first at Ruppin and Rheinsberg, then in Potsdam and Berlin, Emanuel stood some way down the musical pecking order. Above him were Kapellmeister Carl Heinrich Graun and Johann Joachim Quantz, Frederick’s pet flautist-cum-flute-teacher. Quantz was not only paid far more lavishly, but also enjoyed unique powers in the court. A far less compliant personality (not for nothing was he a Bach), Emanuel came to resent both his financial status and the pervasive atmosphere of sycophancy at court. Frederick’s flute playing, which he often accompanied in the nightly chamber concerts, was more than tolerable, though nowhere near as good as the flatterers pretended.

During his three decades in Berlin, Bach wrote a fair amount of dispensable ‘utility’ music alongside intensely personal keyboard sonatas and fantasias. He also composed swathes of harpsichord concertos for his own performance, and a clutch of bold, fiery symphonies. While some of these orchestral works were heard at court, many were probably intended for performance among connoisseurs (Kenner) at Berlin’s concert societies, or ‘academies’, held variously by the composers Johann Gottlieb Janitsch, Christian Friedrich Schale and Johann Friedrich Agricola.

Together with the mellifluous concertos of his half-brother, Johann Christian, Emanuel Bach’s concertos form a crucial link between the Baroque ritornello design pioneered by Vivaldi and the Classical concertos of Mozart, in which the ritornello structure is modified under the influence of sonata form. But to regard them as merely ‘transitional’ is to miss their brilliance and originality. Following the examples of his father’s concertos, many of which were transcribed for different instruments, Emanuel’s three cello concertos also exist in versions for harpsichord and flute. The composer’s entry in his own thematic catalogue (Nachlass-Verzeichniss) lists the concertos as for ‘harpsichord, two violins, viola, and bass; also set for the cello and the flute’. While it was long assumed that the harpsichord versions were the originals, the editor of the new C P E Bach Edition, Robert Nosow, has proposed that all three works may have started life as cello concertos. Whatever the truth—and we shall probably never know—Bach’s writing for cello is thoroughly idiomatic. In the A minor (1750) and B flat major (1751) concertos he imaginatively exploits the instrument’s middle and lower registers (Emanuel had surely learned a thing or two from his father’s cello suites). The A major concerto of 1753 is more overtly virtuosic in style, specializing in wide leaps and rapid string crossings, and, in the central Largo, making eloquent use of the cello’s plangent upper register.

As with so many of his father’s concertos, we can only speculate as to who played Emanuel’s cello concertos. Two possible candidates are the Italian cellist-composer Carlo Graziani, who was active for a time at the Prussian court, and the Bohemian Ignaz Mara, principal cellist in Frederick the Great’s chamber ensemble from the early 1740s onwards.

Cast in the unusual metre of 3/2, the Allegro assai that opens the Cello Concerto in A minor is Bach in impetuous, proto-Sturm und Drang mode. The opening ritornello typically combines fierily striding sequences, quirky rhythmic irregularities and sudden discontinuities. As in the finale of the B flat major concerto, the soloist attempts to bring calm to the fray with an elegiac cantabile (a foretaste here of the opening movements of Mozart’s minor-keyed piano concertos, K466 and K491). Equally inevitably, creative conflict between lyricism and turbulence ensues. The cellist later reveals a hectic, percussive side, while the movement’s initial motif—an angular arpeggio figure—is likely to invade the discourse at any moment. In his own cadenza, Nicolas Altstaedt underlines the resemblance between the cello’s opening cantabile and the alto aria ‘Es ist vollbracht’ from the St John Passion.

The C major Andante, in 6/8 time, begins with the promise of innocuous galanterie, though true to form Bach soon starts to disrupt the music’s smooth surface. More than once the metre becomes blurred, while the central episode develops into a dramatic dialogue between cello and orchestra. For his finale Bach writes a movement in the style of a quick march. The principal player here is the opening ‘flicking’ figure, bandied about between upper and lower strings, and between soloist and orchestra, with the composer’s own brand of wayward, obsessive humour.

Beginning with a suavely symmetrical theme that might have come from the pen of Boccherini, the opening Allegretto of the Cello Concerto in B flat major reveals C P E Bach at his most amiably galant. After the initial ritornello, cello and orchestra work in close collusion developing and elaborating fragments of the ritornello themes. In the central, ‘developing’ episode the soloist indulges in bouts of low-lying toccata figuration which recall Vivaldi’s cello concertos, some of which Emanuel surely knew.

With its abrupt contrasts of texture and dynamics and halting, sighing phrases, the G minor Adagio is Bach in soulful, empfindsam vein. In essence the movement is a rhapsodic meditation on the themes announced in the opening ritornello, though the mood is intermittently punctuated by interjections from a spiky little arpeggio figure. Is Bach being ironically humorous here? The closing ritornello drifts from G minor to the dominant of B flat major in preparation for the finale.

As if to atone for his unwonted urbanity in the first movement, Bach here reverts to type with music of fizzing, almost manic energy, founded on volleys of repeated notes, sudden hiatuses and unscripted swerves into alien keys. On its initial entry the cello tries to impose a measure of lyrical decorum, before the orchestral strings crash in with the ritornello theme. Thereafter soloist and orchestra constantly collide in a movement that seems calculated to wrong-foot the listener. Even the brief bouts of toccata figuration never quite take you where you expect, as they almost invariably do in Vivaldi.

Last of the three to be composed, the Cello Concerto in A major begins with a swashbuckling Allegro whose bounding arpeggio theme is the mainspring of the action. Typically, the cello’s attempts at sustained lyricism are repeatedly threatened by the orchestra’s half-playful, half-nervy interjections. At the start of the central solo episode soloist and orchestra indulge in some jocular banter, turning the arpeggio theme on its head, before the cello plunges into the modulating, toccata-like sequences characteristic of all these concertos. As usual with C P E, a swerve into an unexpected key is always round the corner.

Bach’s marking for the A minor slow movement—Largo con sordini, mesto (i.e., ‘sad’)—promises, and delivers, something special. Muted strings initiate a lament whose broken, sobbing phrases, replete with falling semitones, and disquieting dynamic contrasts are the epitome of Empfindsamkeit. Was C P E here remembering his father’s Three-Part Invention in F minor? After the initial ritornello, the movement develops into a grieving dialogue between the muted orchestra and the unmuted cello, playing largely in its piercing upper register. As so often in Bach’s most personal slow movements, music here becomes heightened speech—a reminder, too, that his own clavichord playing was famed for its impassioned, rhetorical style of delivery.

Brooding introspection is then banished in the exuberant, jig-like finale. Yet this being Bach, joviality is tempered by an underlying edginess, whether in abrupt hiatuses, the conflict between the orchestra’s triplets and the cello’s duplet rhythms, or the soloist’s brusquely thwarted attempts at lyricism. By the end the cello has cut its losses and matched the orchestra at its own hyperactive game—a leitmotif in all the fast movements of these restlessly inventive concertos.