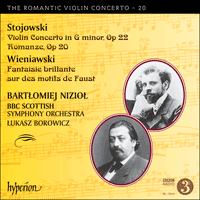 The music of Zygmunt Stojowski has yet to benefit from the renaissance enjoyed by other Polish composers of the late nineteenth and early twentieth centuries. His violin concerto—enthusiastically received at its premiere—is here revivified alongside Wieniawski’s dazzling Fantaisie in volume 20 of our Romantic Violin Concerto series.

PRESTO CLASSICAL DISC OF THE WEEK

‘This is a thoroughly enjoyable disc, not only because of its well-conceived programme of dramatic, impassioned music but also owing to the excellent advocacy of Bartłomiej Nizioł’ (The Strad)» More
‘Bartłomiej Nizioł rises admirably to the challenges posed by these works with his ripe yet never over-succulent tone, tempered by focused vibrato and secure technique’ (Classical Ear)» More

Zygmunt (or Sigismond) Stojowski (1869–1946; some sources give 1870 for the year of birth) was born in the village of Strzelce (some forty miles south of Kielce, now in the Świętokrzyskie Province of south-central Poland, but then in the Russian Partition). His mother, Maria, was a competent pianist and became Zygmunt’s first piano teacher. The family moved to Kraków when Stojowski was in his early teens, and his mother’s connections in the city included Princess Marcelina Czartoryska, née Radziwiłł, a pupil of both Czerny and Chopin. It was at the Princess’s salon that Stojowski gave his first concert with orchestra: at the age of fifteen he performed Beethoven’s Piano Concerto No 3 and composed his own cadenza for the occasion. After studying composition in Kraków with Władysław Żeleński, Stojowski went to Paris at the age of seventeen. He was admitted to the Paris Conservatoire, where his teachers included Louis Diémer for piano, Léo Delibes for composition and Théodore Dubois for harmony. In 1889 he won a first prize for counterpoint and fugue (much to the delight of Delibes), and shared the piano prize with Édouard Risler.

After leaving the Conservatoire, Stojowski continued to develop as a pianist (he began studies with Paderewski in 1891) and his compositions started to attract attention. On 17 February 1891 a concert of his works was given at the Salle Érard with the Colonne Orchestra. Stojowski himself played his Piano Concerto in F sharp minor, Louis Diémer played four piano pieces, and the Variations and Fugue was played by a string quartet led by Władysław Górski (1846–1915), a violinist and composer whose teaching made an enormous impact on Stojowski. Joseph A Herter, the leading authority on Stojowski, described Górski as ‘the teacher who had the most profound influence on him as a musician’, and Stojowski himself declared that Górski taught him ‘extreme refinement and catholicity of taste’. As we shall see, he was also the inspiration for the violin concerto.

It was also in Paris that Stojowski first met Tchaikovsky, who admired the young man’s musical skills but also his facility with languages: when Tchaikovsky conducted the British premiere of his fourth symphony at St James’s Hall, London, on 1 June 1893, Stojowski was in attendance to translate for him, and a few days later was given the copy of the score used by the composer for the performance, inscribed ‘à mon cher jeune ami Sigismond Stojowsky souvenir affectueux P. Tchaikovsky 9 juin 1893 Londres’. The musicians with whom Stojowski came into contact during his twenties included many of the leading composers of the day. In April 1933 Stojowski published ‘Recollections of Brahms’ in Musical Quarterly (Vol 19 No 2, pp.143–150). He recalls that when they first met in Vienna, Brahms was quick to compliment Stojowski’s teacher Delibes (‘we know his ballets here—very charming music indeed’), and Stojowski was struck by Brahms’s ‘perfectly simple and straightforward manner—the eternal hallmark, probably, of true greatness’. There is another fascinating aspect of this article: Stojowski describes with great clarity the different aesthetics of French, German and Russian composers—and is happy to find the best in all of them: Górski’s inculcation of ‘catholicity of taste’ had clearly made a deep impression.

The Violin Concerto in G minor, Op 22, was probably composed in about 1899 and the first performance was given in Paris on 25 March 1900 at the Salle Érard. The soloist was Władysław Górski and the orchestra was conducted by Camille Chevillard. The concerto was ‘greeted with enthusiasm by the audience’ according to a report of the concert in the Bulletin polonais (15 April 1900), but despite this successful premiere, the work was not widely performed. Stojowski moved permanently to the United States in 1905, and the score of the violin concerto was published in Boston in 1908 by Arthur P Schmidt. In the 1920 American Supplement to Grove’s Dictionary of Music and Musicians, the entry on Schmidt lists Stojowski’s concerto as one of the firm’s ‘notable publications’, but even so soloists were reluctant to take it up until comparatively recently. Appropriately enough, the score has a lengthy printed dedication to Górski: ‘To Monsieur Ladislas Gorski. To the master-collaborator and first interpreter, in recognition of artistic gratitude for the valuable assistance he gave me during the composition of this work.’

The first movement, marked Allegro deciso, begins in G minor with a very short fortissimo orchestral introduction, marked by cross-rhythms that hint at the influence of Brahms. Over a sustained low C sharp in cellos and basses, the timpani play repeated Gs (in a pattern that is perhaps an allusion to Beethoven’s fifth symphony) to introduce the soloist. At first, the material is a more florid extension of the orchestral opening, with some deft orchestral accompaniment such as the sinuous thirds on flutes, then on clarinets. A second idea is marked by a rising solo violin phrase on a dotted rhythm, at first reaching up an octave but subsequently appearing in many different guises, initially accompanied by a variant of the timpani pattern from the opening. As the movement progresses, the close interplay of Stojowski’s musical ideas gives a strong feeling of thematic integration, but the structure feels free, unfolding in a way that is almost rhapsodic. A moment of calm sees the return of the dotted rising theme presented in a particularly tranquil guise—a passage that could almost be a pre-echo of Elgar’s violin concerto (1910). Though there are a few very brief unaccompanied passages in the movement, Stojowski has no cadenza, and the movement ends robustly in G major.

The Andante non troppo is perhaps the concerto’s most effective movement. Essentially it is an extended song-like violin solo, mostly rather tranquil in mood (and centred around D major), but with some more agitated moments too—this is by no means a featureless landscape. The subtle and sophisticated orchestral accompaniment includes a harp (not used in the first movement) which is heard to particularly telling effect at the very end.

In the lively finale (Allegro giocoso) it is possible, perhaps, to hear something of Stojowski’s native Poland in music that has a dance-like 2/4 metre occasionally interrupted by bars in 3/4 time. A lyrical variant of the opening theme provides one of several slower episodes. After considerable harmonic excursions, the music finally makes its way back to the home key of G major with the soloist playing a delicate version the opening theme, accompanied only by flutes in semiquavers and upper strings, preparing the way for a full-blooded conclusion.

The Romanze in E flat major, Op 20, dates from around the same time as the violin concerto. It is dedicated to Jacques Thibaud (1880–1953), then at the start of his long career, and was published by Peters in Leipzig in 1901. Joseph A Herter has suggested that as Thibaud and Stojowski were both engaged for the inaugural season of the Warsaw Philharmonic in 1901–2, the Romanze may have been ‘written as a musical souvenir to commemorate their meeting in Warsaw’. It is a delightful piece, with a quietly expressive outer section marked Andante ma non troppo framing a faster and more impassioned central episode. The ending—much helped by Stojowski’s ear for refined orchestral detail—is particularly effective and poetic.

Henryk Wieniawski (1835–1880) was a Polish composer–performer of an earlier generation who also trained at the Paris Conservatoire (he was admitted when only nine years old), though much of his career was spent in Moscow, where he moved in 1860 at the invitation of Anton Rubinstein, and as a widely travelled virtuoso. He later replaced Henry Vieuxtemps as professor of violin at the Brussels Conservatoire. The Fantaisie brillante sur des motifs de l’opéra Faust de Gounod, Op 20, was composed in 1865. This was six years after the opera had first been staged in Paris, and a year after a successful production in St Petersburg. Wieniawski was one of several virtuoso violinists to write showpieces based on Gounod’s Faust: similar compositions on themes from the opera followed in quick succession from Alard, Dancla, Vieuxtemps and Sarasate.

After a brooding orchestral opening, the soloist enters with a cadenza before continuing with Faust’s ‘Rien! En vain j’interroge’ from Act 1. This gives way to a more lyrical passage based on Valentin’s ‘Ô sainte médaille’. The third section is animated, introducing Méphistophélès’s ‘Le veau d’or’ from Act 2. The Act 3 duet between Faust and Marguerite (‘Laisse-moi’ … ‘Je veux t’aimer’) is used for a slower section before the brilliant finale, based on the famous Act 2 waltz (‘Ainsi que la brise légère’). The Fantaisie was first published in Leipzig by Kistner in May 1868 in versions with orchestra and piano, with a dedication to King Christian IX of Denmark. Wieniawski wrote the work for himself to play, and the Illustrated London News reported on his visit to the Musical Union on 22 May 1866, where his performance of the Faust fantasy—its first in London—was ‘applauded to the echo by a crowded and fashionable audience’.