Dona nobis pacem became a somewhat unexpected hit for Vaughan Williams. A fervently anti-war plea from the heart composed in 1936 as a pièce d’occasion for the Huddersfield Choral Society, it remains to this day one of the composer’s most widely performed works. Coupled with it here is the first recording of Stephen Hough’s Missa Mirabilis (the title derives from an unfortunate motorway incident), a work which shares with the Vaughan Williams an ability to seem very much greater than the sum of its parts. Andrew Litton directs the Colorado Symphony and all-star soloists Sarah Fox and Christopher Maltman. 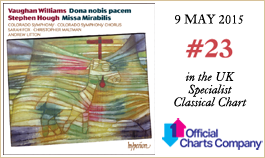 ‘Not only does Andrew Litton draw a terrifically agile response from his combined Colorado Symphony forces, he masterminds a reading which in its expressive urgency, arresting conviction and dramatic bite grabs the listener from the word go’ (Gramophone)
‘In the opening Agnus Dei soprano Sarah Fox is immediately intense and focused, the Colorado Symphony coiled and ready to spring on the explosive tutti that rips forth from the softer textures’ (BBC Music Magazine)» More

‘This is an original, tightly organised and inventive setting of the Mass. It receives an excellent and very committed reading here; I enjoyed both music and performance very much’ (MusicWeb International)» More
‘This is a Dona nobis pacem to rival the best, even better recorded than other versions, with an interesting new work thrown in’ (MusicWeb International)» More
‘An inspired choice … strong solo turns by the British soloists, soprano Sarah Fox and baritone Christopher Maltman, add to the appeal and the sense of a mixture held together well by the conductor … recommended’ (AllMusic, USA)» More

For British composers at the turn of the century, the poetry of Walt Whitman had a profound fascination and attracted, among others, Delius (Sea-Drift), Vaughan Williams (A Sea Symphony) and Holst (Ode to Death). Vaughan Williams first set words by Whitman in 1904, two songs for soprano and baritone, The last invocation and The love-song of the birds. In 1911, following the successful launching of A Sea Symphony, he began another Whitman setting, Dirge for two veterans, from the American Civil War poem Drum-Taps. Perhaps because he felt it did not stand satisfyingly on its own, he put it away in a drawer, and it emerged twenty-five years later as the fourth movement of his large-scale cantata Dona nobis pacem. This was composed for the centenary of the Huddersfield Choral Society in 1936, but it was also a piece of propaganda, a commentary on the state of Europe as it moved inexorably towards another major war. In an article in 1912 Vaughan Williams wrote: ‘We must cultivate a sense of musical citizenship … The composer must … live with his fellows and make his art an expression of the whole life of the community.’ In expressing the community’s prayer for peace in the light of the events in Germany in the 1930s, he was now practising what he had preached. The first performance was given in Huddersfield on 2 October 1936, with Renée Flynn and Roy Henderson as soloists, the Huddersfield Choral Society and the Hallé Orchestra conducted by Albert Coates. During the rest of his life Vaughan Williams conducted this work quite often.

The words are selected from a variety of sources, principally from the scriptures and Whitman. The interpolation of the one into the other pre-echoes Britten’s scheme in his War Requiem of twenty-five years later. Skilfully though the libretto is compiled, Dona nobis pacem cannot be said to be a unified musical conception, but the sheer quality of the music has ensured that it has outlived the occasion for which it was written and, alas, the subject grows no less topical.

The cantata is in five main sections:

Agnus Dei (Lento): After two bars of orchestral chromatic chords, the soprano enters pianissimo with the Latin prayer from the Liturgy, her ‘Dona nobis pacem’, the work’s principal leitmotif, thrice repeated. The chorus echoes this plea for peace and then, in a sudden discordant outburst, the soloist and chorus cry it to the heavens. As this climax subsides, the drums begin beating and the music flows without a break into the second section.

Beat! beat! drums! (Allegro moderato): Trumpet calls over beating drums are a prelude to the chorus’s words from Whitman’s Drum-Taps, a declamatory description of the overwhelming effects of war on town and countryside. Short, harsh, ejaculatory phrases convey the ruthlessness of war.

Reconciliation (Andantino): The stridency of the previous section is banished by strings high in their register and the musings of a solo violin, in a serene slow movement typical of Vaughan Williams. The words are again from Drum-Taps and are given to the baritone soloist with his message of ultimate reconciliation sung to music of notable compassion. This section is repeated by the chorus, after which the soloist continues with the passage ‘For my enemy is dead, a man divine as myself is dead’. This again foreshadows Britten’s use of Wilfred Owen’s Strange Meeting in the War Requiem. The chorus repeats the first section and the soprano quietly interjects her prayerful ‘Dona nobis pacem’ to close the movement.

Dirge for two veterans (Moderato alla marcia): Over a steady drum rhythm a solemn march-tune introduces the Whitman word-picture of the burial by moonlight of a father and son who have been killed in battle. The chorus sings this movement, setting the scene with a description of the rising of the moon and the arrival of the cortège at the double grave. The march is thundered out in C major, the chorus silent. The vocal writing now becomes modal before the intense climax and quiet ending. This movement’s melodic directness is apposite to the directness of the message of this work and, without knowing it, one would not guess the music’s earlier date.

The Angel of Death has been abroad: To a sparse accompaniment, the baritone declaims John Bright’s words about the Angel of Death, spoken in the House of Commons in 1855 in a debate on the Crimean War. The soprano soloist and chorus renew their anguished cry for peace, the chorus following this with man’s perennial despairing question ‘Is there no balm in Gilead?’. Vaughan Williams suggests that there is, for the baritone sings an assurance of peace. Now the orchestra begins to glow radiantly with a beautiful passacaglia-like melody, as the chorus sings of nations at peace with one another. As this vision intensifies, the vocal and orchestral writing become contrapuntal in texture and the bells begin to peal. To the passacaglia-tune a new heaven and a new earth are invoked and finally the Christmas message of peace and good-will toward men. The last three words are reiterated emphatically, followed by a coda in which the chorus reaffirms the soprano’s final entreaty, ‘Dona nobis pacem’, so bringing the cantata to a quiet and peaceful ending in a final impression of optimism.