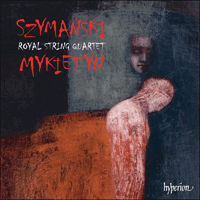 The official titles of the works performed here are not helpful: what they conceal are the most extraordinary soundworlds from two composers at the vanguard of the contemporary Polish music scene, and the magicians of the Royal String Quartet summon from their instruments sounds of collective and individual wonder.

This is music to grab the attention of its audience—whether willing or not—and it will leave listeners emphatically having chosen a side of the fence.

‘The Royal String Quartet have made a good reputation in … their support of modern composers and in particular the avant-garde among their fellow-Poles … Paweł Szymański and Paweł Mykietyn … share a subtle ear for string textures and a capacity for demanding much of their interpreters’ techniques’ (Gramophone)
‘A superbly performed disc of interesting contemporary string quartet music … quite stunning playing from the Royal String Quartet makes as cogent and convincing a case for all the works here as could be imagined’ (MusicWeb International)» More
‘Paweł Szymański is represented by short pieces for string quartet with delicate and beguiling textures, while a Paweł Mykietyn quartet draws the listener into captivating soundworld. Well worth the plunge’ (The Northern Echo)» More
‘Throughout the quartet performs with unwavering verve and polish’ (WQXR, USA)» More
«Le Royal String Quartet domine [ces pages] avec une précision acérée et une aisance presque désinvolte» (Diapason, France)» More

The names of Paweł Szymański (born 1954) and Paweł Mykietyn (born 1971) may not be as widely known as those of Polish composers born before the Second World War, such as Witold Lutosławski, Krzysztof Penderecki or Henryk Mikołaj Górecki, all of whose string quartets have been recorded on Hyperion by the Royal String Quartet. Yet within Poland, Szymański and Mykietyn have long been regarded as being in the vanguard of a new direction in Polish music. Their outputs span chamber and orchestral music, choral and vocal music, opera, and music for the theatre and film.

Paweł Szymański initially came to prominence in the late 1970s having studied with major composers in Warsaw (Włodzimierz Kotoński and Tadeusz Baird) and Vienna (Roman Haubenstock-Ramati). From the outset his compositional voice and aesthetic approach were distinctive. His music reveals both a deep engagement with the conventions of the past and an ironic and sometimes unsettling distance from them. In many works his inspiration is the eighteenth century, as in the Sonata for violins, double bass and percussion (1982) or the orchestral Partita IV (1986). At the base of his music is often a fully worked-out canon or fugue that he then riddles with rests or attenuates beyond recognition.

Szymański has called his treatment of borrowed or self-constructed material ‘surconventionalism’. Others might use the term ‘postmodernism’. His sources may stretch back to the medieval tune ‘L’homme armé’ (as in Lux aeterna, 1984) or to a more recent mazurka by Karol Szymanowski (in the Sonata). The Piano Concerto (1994), with the jazz syncopations of the first movement complemented by the quiet and extremely drawn-out polyphony of the second, is an example of Szymański’s fondness for bipartite structures. His range—from aphoristic pieces to extended works like his opera Qudsja Zaher (2005, premiered 2013)—constantly surprises, as do his often quixotic titles (such as Four Hevelian Dances for organ and two positive organs, 2011) and his reluctance to say anything about his music.

Szymański sometimes prefers noncommittal titles, exemplified by the three works for string quartet on this disc. The Two pieces for string quartet (1982) were premiered by the Musica Nova Quartet in Zakopane on 1 October 1983 during the 7th Szymanowski Music Days. They were composed, like the Sonata, to mark the centenary of the birth of Szymanowski, although if there is any source in his compatriot’s music it is well masked. The emphasis on the note E flat (Es in Polish terminology), might refer to the S of Szymanowski. But given the work’s completion in January 1982, just a month after the declaration of Martial Law in Poland, it might just as easily symbolize the suppressed trade union Solidarność (Solidarity). More importantly, this work is an early example of a bipartite structure, one whose musical language has little overt connection with external sources.

The opening harmonics, E flat–A, on the second violin set a tone of almost Lutosławskian lament. What follows is striking not only for its grinding vigour but also for its rootedness in a sequence of unison pitches. The music eventually settles on another tritone, F sharp–C.

The substantially longer second piece does not initially offer much resolution, preferring instead to muse quarter-tonally around E flat. Gradually the music accumulates scalic passages, oscillating thirds (and then larger intervals), an increasingly layered rhythmic texture and a suppressed urgency. An open fifth, E flat–B flat, initiates a series of descending glissandi and trills and an even more emphatic unison E flat. A series of joint sfppp entries by the viola and cello marks a winding-down to a resolution where the music veers gently between the E of C major and the E flat of C minor, with the occasional backward glance to the E flat–A glissando of the opening.

The Five pieces for string quartet (1992) followed ten years later. They were commissioned by the BBC and first performed for a BBC Radio 3 broadcast by the Brodsky Quartet in August 1993. This work was written in memory of the Polish painter Jerzy Stajuda (1936–1992), who was renowned for his veiled images and paint washes rather than sharp delineations. Lutosławski was one of his many musical admirers.

This set of five miniatures opens with Szymański in playful mood. The idiom initially sounds authentically eighteenth-century, but the figuration soon breaks up and then is stretched and distorted this way and that by glissandi, occasionally giving glimpses of a diatonic harmony. A quiet chord of E flat minor is soon dismissed and the first piece ends with a gruff exploration of the cello’s open-string C, the final instruction being ‘to finish this sound with a creak’.

The tick-tock of the brief second piece (with E flat–A again at its heart) attracts a host of other impulses, until it is supplanted by striding bowed figures and a final flourish outlining a dominant 7th on F (which goes unresolved). The third piece perhaps most closely parallels Stajuda’s aesthetic. After a chiming of harmonics, Szymański introduces delicate trills, turns, and motifs suggestive of eighteenth-century figures that evaporate as soon as they appear.

The last two pieces are more robust. The striding C minor arpeggios at the start of the fourth might suggest a link with American minimalism, but the almost immediate contrast with repeated G naturals indicates that Szymański has a different goal. There is a ferocity in the music’s tonal and figurative persistence that, in its confined context, achieves a cataclysmic collapse. The descending multiple tritones are crystallized in the fifth piece, whose insistent tritone F–B is briefly contextualized as part of another dominant seventh and offset by passing major/minor triads.

The Four pieces for string quartet (2013) are dedicated to the Royal String Quartet, who gave the premiere during the Kwartesencja festival in Warsaw on 8 November 2013. The four sections run without a break. Their musical language demonstrates Szymański’s continuing fascination with tonal and stylistic referencing, and with elusive processes and enigmatic structures.

The first piece begins forthrightly, with open and stopped strings, quarter-tone inflections and displaced unisons. Whether by accident or design, it uses a very similar cumulative pitch process to that employed by Lutosławski in the first of his groundbreaking Five Songs (1957): a ladder of thirds on ‘white’ notes, extending from D above middle C (to use keyboard terms) up to the B above the treble stave. These seven pitches are interlaced with the five ‘black’ notes. Alongside its greater rhythmic liveliness and more extended timespan, Szymański’s version of this process differs from Lutosławski’s in that the chromatic (‘black’) notes are often three-quarters of a tone flat rather than just a semitone. The pattern is broken by high unison F sharps that lead into the second piece, with its initial focus on high Cs. Szymański’s variable ostinati are articulated here by vividly contrasting timbres.

A brief skewing of the material heralds the start of the third piece. Although it begins with repeated minor thirds, recalling the first piece, the third soon darts off in wild and almost comedic abandon, sinks down in a group glissando, pauses, resumes, and stutters its way into the finale. This picks up on the group glissando, as if recollecting the second movement of the Two pieces. There is a brief, quarter-tonal recitando on the first violin over a sustained triad. The sempre non vibrato glissandi return and settle on the violins’ lowest open string. At this point the lamenting recitando reappears in ardent unison (once again Lutosławski may come to mind). The last word is left to the solo cello.

Paweł Mykietyn also studied composition with Kotoński as well as pursuing a career as a clarinettist (he formed the group Nonstrom in his early years). Much impressed by Szymański’s ‘surconventionalism’, Mykietyn soon made his mark with humorous works like U Radka (At Radek’s, for chamber ensemble, 1993). He moved on from Baroque idioms to those to which he felt closer, such as rock music, hip-hop and trip-hop. Among his most compelling works are two symphonies (2007, 2011) and the St Mark Passion (2008). This last work virtuosically combines many musical worlds, setting Polish and Hebrew, as well as telling the story backwards and inserting Christ’s genealogy as a separate thread.

Mykietyn’s award-winning music for film and the theatre also colours his creative outlook, and Wax Music for wax cylinders and piano (2012) confirms his experimental drive. His music this century is also profoundly engaged in microtonality. Shakespeare’s Sonnets for male soprano and piano (2000) was a notable staging post and the second string quartet (2006) reinforces this aspect of his music.

Mykietyn’s String Quartet No 2 (2006) was written for the Kronos Quartet, who gave the premiere in Kraków on 11 November 2006. Cast in a single, multi-sectioned span, it establishes a microtonal language as its norm. Those brief moments where conventional semitonal tuning dominates seem almost alien. Mykietyn is captivated by harmonics—as is Szymański—and their high partials call to mind the timbral qualities of the accordion or glass harmonica.

The opening section interlocks two subtly different phrases made up of individual ostinati. As these begin to disintegrate (hints, perhaps, of the finale of Beethoven’s Violin Concerto?), there is the first semitonal flourish (first violin), setting a developmental pattern of continuity of arching harmonics gradually overtaken by other ideas, rather in the manner of Lutosławski’s ‘chain’ technique. Some of these ideas have an eighteenth-century flavour, but the most striking of them is first heard in a descent of overlapping harmonics, above a repeated cello D natural. This will prove to be the work’s principal thematic riff. After further intercutting of semitonal and quarter-tonal passages, a drone-like texture appears, with the viola exploring its C quarter-sharp, above the cello’s more stable octaves, in a manner associated with the tuning-up of bagpipes.

The cello then takes command, playing pizzicato cantabile. When the other instruments rejoin, the folk-like atmosphere becomes unmistakable: we hear not only the drone but also the highly ornamented violin line and, shortly after, the return of the main riff. The quartet has become a lyrical and through-composed extemporization. A short passage of descending glissandi transforms into a coda of sparkling harmonics, concluding with an allusion to a brief moment heard earlier in the quartet.