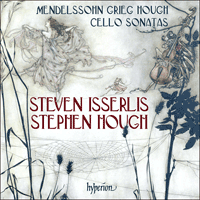 Grieg’s sole Cello Sonata has long been a favourite of performers and audiences, if not of musical theorists, and here receives an impassioned vote of confidence from Steven Isserlis and Stephen Hough at the head of a programme which takes the listener forwards in time to Hough’s own Sonata for cello and piano left hand and back to Mendelssohn’s ever-popular Cello Sonata No 2. A spirit of passionate romanticism unifies the whole.

‘The performance couldn’t be more persuasive and the two players are beautifully recorded, with Isserlis providing typically engaging notes’ (Gramophone)
‘Steven Isserlis and Stephen Hough move things up to another level of intensity and technical command’ (BBC Music Magazine)» More

‘This latest release has been imaginatively put together, with two big romantic cello sonatas framing one of Stephen Hough’s own compositions … with each new recording this illustrious duo go from strength to strength’ (MusicWeb International)» More
‘This then is an arresting release, which contains powerful, deeply felt performances that demand to be heard and as such carries the highest recommendation’ (Audiophile)» More

Three sonatas, from three different countries and cultures, separated by some 170 years—there are many differences between the works on this recording. And yet there are strong connections, too: all of them are by pianist-composers; all require considerable virtuosity from both players; and, most significantly, all three works combine classical forms with a passionately romantic spirit.

Of the three, the wildest is probably Grieg’s cello sonata, his only work in the genre. It was composed in Bergen during the winter of 1882–3, a difficult time for Grieg. ‘I am both spiritually and bodily unwell’, he wrote, ‘and decide every other day not to compose another note, because I satisfy myself less and less.’ An attempt to compose a second piano concerto had been abandoned for lack of inspiration. Perhaps this explains why the cello sonata harks back so strongly to the melodic and harmonic style of Grieg’s famous A minor concerto—returning to a safe haven? The sonata, dedicated to Grieg’s cello-playing brother John, was first performed in Leipzig in October 1883, with the composer at the piano and Julius Klengel, the teacher of John Grieg (as well as of Feuermann, Piatigorsky and many others), on the cello.

Grieg’s sonata has been given a rather rough ride by commentators, if not by performers. The composer himself complained that ‘it does not betoken any forward step in my development’, and several other critics have enthusiastically (if sourly) seconded this comment. But that is not the whole story: Grieg by no means disowned the sonata, programming it in several of the most important concerts of his later years: in London in 1889 with the ageing legend Alfredo Piatti (‘as famous as he is boring’, Grieg told Delius); in 1906, the year before the composer’s death, in Amsterdam with Casals (‘a great, great artist’ was Grieg’s rather more favourable verdict); and, shortly afterwards, with Casals’ nemesis Hugo Becker, again in London. Furthermore, on the very last night that Grieg was to spend in London, he was delighted by a private performance of the sonata given by his young disciple Percy Grainger with the cellist Herman Sandby. ‘There were things that Grainger got much more out of than I myself did, and on the whole I received a grand lesson’, noted the composer in his diary. After Grieg’s death, the sonata’s continuing popularity—among musicians and audiences, at least—is proved by the number of famous duos who have taken it into their repertoire. In 1912, for instance, it featured on the programme of the only recital that Casals and Arthur Rubinstein gave together, while just over fifty years later it concluded one of the very few duo recitals that Rostropovich and Richter gave in the West.

The negative attitudes of those writers who have criticized the sonata seem to have centred around three perceived weaknesses. The first is the self-derivative nature of the themes. The looming shadow of the piano concerto in the outer movements is not the only self-reminiscence here; the theme of the slow movement, also, is almost identical to that of the Triumphal (or Homage) March from Grieg’s incidental music to Sigurd Jorsalfar (where it is played by four solo cellos). But is this really a problem? The melodies are convincingly beautiful, and deeply felt; and all of them are as idiomatic for cello as for piano—by no means an easy feat for a composer. The second criticism is a general one levelled at Grieg’s music—that of parochial nationalism. As George Bernard Shaw—not the most perceptive of music critics, albeit one of the wittiest—grumbled: ‘He is a national composer, and I am not to be imposed on by that sort of thing.’ What nonsense. Grieg’s music is distinctively Norwegian, of course; but that is a strength, not a weakness. And anyway, it easily transcends mere nationalism. As Grieg himself put it: ‘Music that counts, however national it may be, is yet lifted high above the national level.’ The third barb frequently levelled at the poor sonata concerns the somewhat loose usage of its classical forms. Here perhaps we should leave the defence to the London magazine Musical Opinion of April 1889: ‘For originality, spontaneity, melodic and rhythmical wealth and charm, variety and picquancy of harmony (quite apart from the Northern local colour), nervous force, stirring passion and entrain’, wrote the anonymous critic, ‘[the sonata] is hard to match in modern chamber music. And if the working out of the first allegro consists chiefly in repetitions in different keys, let us have such repetitions—so novel and striking in the change of tonality—by all means; whilst in the finale (of Schubertian length, but without a bar to spare) the truly organic development of the beautiful subject-matter, which rises at times to a lofty height, would do credit even to Brahms.’ Ha. For Stephen and me, anyway, it is a marvellous work, combining warm-hearted charm with joyous excitement—and imbued throughout with what Grainger so aptly describes as Grieg’s ‘soaring ecstasy of yearning wistfulness’.

Stephen Hough’s sonata came into being in rather a curious fashion. During the course of an otherwise rather disastrous evening—for which I had booked theatre tickets for Stephen and myself, and our respective partners, but, as it turned out, had booked them for the wrong performance, which we had already missed—I mentioned to Stephen the plight of a mutual pianist friend who was unable to play with his right hand. I asked Stephen whether he might consider writing a sonata for cello and piano left hand. Stephen’s face took on the sort of thoughtful expression he normally reserves for studying menus of the day or wine-lists at restaurants; and I knew that the idea had struck home. Several months later, the sonata arrived, kindly co-commissioned by the Tetbury Music Festival in Gloucestershire, and by the Kronberg Festival in Germany, where Stephen and I first performed it in October 2013. (Rather ironically, our friend’s right hand improved shortly after I’d had my brilliant idea, and he chose not to learn the sonata, not wanting to be reminded of difficult times!)

The use of left hand only in the piano gives the sonata a distinctive range of dark textures, which perhaps suggested its subtitle ‘Les adieux’. Stephen explains this: ‘The subtitle is non-programmatic but it underlines the melancholy spirit of the piece as well as conjuring up ghosts of Beethoven and Dussek.’ (Perhaps Dussek’s ghost is quite grateful to receive a comparatively rare summons from the grave?)

The work is in one continuous movement, but separated into three discrete, although related, sections. The first opens with the cello’s A-string (the highest of the four), played pizzicato—i.e. with the right hand only—echoed by the piano. The simple motif that evolves from this is steadily expanded, growing in intensity until a passionate climax gradually melts into the second section, marked with the Schumannesque title ‘Im Legendenton’. This evokes very different textures, somewhat Eastern in feel, the two instruments blending mystically in a forest of lyrical semi-quavers. As subtle hints of this ostensibly new material were heard in the first section, so references to the opening material appear throughout ‘Im Legendenton’. Increasingly, they disturb the calm, leading to a fiery cello cadenza, urgently reprising the opening of the sonata; this in turn melts into a gentle, consoling coda. The sonata ends peacefully, the cello, again pizzicato, at rest on its lowest note, the open C-string—as if resolving its own opening question.

It may be rather a shock to be thrown from such serenity into the extrovert world of Mendelssohn’s second cello sonata—but hopefully the shock will be a pleasant one, since this sonata is one of the masterpieces of the cello/piano repertoire. Like Grieg, Mendelssohn had a cello-playing brother, Paul, for whom he wrote his first work for cello, the Variations concertantes, Op 17. The D major cello sonata, however, composed in 1843, is dedicated to a Russian count who was apparently a fine amateur cellist, Count Wielhorsky—also the dedicatee of Schumann’s famous piano quartet, composed the previous year. The sonata was first performed by the first cellist of Mendelssohn’s Leipzig Gewandhaus orchestra, Franz Carl Wittmann, with the composer at the piano, in November 1843 (thus giving the three sonatas on this recording another connection: all were premiered in Germany in the autumn!). Mendelssohn played it again in London a couple of years later with Alfredo Piatti, of whom Mendelssohn thought far more highly than did Grieg, it seems. In fact, it is probable that Mendelssohn actually completed a cello concerto for Piatti—but somehow it got lost. Tragedy of tragedies!

Whereas Mendelssohn’s first cello sonata, Op 45, seems to have been primarily intended for the salon—Schumann wrote that it was ‘a sonata for the most cultivated family circle, perhaps best enjoyed after poetry readings from Goethe or Lord Byron’—the D major sonata belongs firmly in the concert hall. Written at a period when Mendelssohn was practically a king in the music world—chief conductor of the Leipzig Gewandhaus orchestra, founder and director of the Leipzig Conservatory, famous pianist, beloved international superstar—this sonata is unmistakeably the work of a master at the height of his powers. We can feel this immediately, from the joyous opening outburst of the Allegro assai vivace; here the two instruments appear to be revelling in their own virtuosic capabilities, as the composer exults in his own compositional virtuosity. The second movement is a typically Mendelssohnian scherzo, blending spritely wit with the wistful melody of the ‘trio’ section. The sonata’s most unusual movement, though, is the soulful Adagio. Here the piano’s opening Bach-influenced chorale is answered by (to me, at least) a distinctly Hebraic cello recitative—perhaps reflecting the dual nature of Mendelssohn who, though from a practising Lutheran family, remained proud of his Jewish roots. (His grandfather was the famous Jewish philosopher Moses Mendelssohn, while one of his ancestors, I’m proud to say, was my family’s patriarch, the great Talmudic scholar Moses Isserles!) The two separate elements of this movement—organist and cantor, as it were—seem to be unrelated; but underneath this contrast, Mendelssohn’s structural ingenuity ensures that the cello’s line follows the same harmonic journey as the piano’s opening. The Adagio ends with the piano taking over the recitative, twelve pizzicati in the cello bringing us to a midnight close. Peace is brusquely and irrevocably swept aside, however, by the dramatic finale, a breathtaking example of Mendelssohn’s fondness for virtuoso display, his dramatic instinct, and his unique melodic gifts.