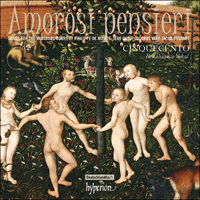 A new departure for the wonderful all-male vocal ensemble Cinquecento. They turn to the secular music—generally much less well-known—of the Renaissance masters Philippe de Monte, Jacobus Vaet and Jacob Regnart whose sacred music they have explored so successfully in previous recordings for Hyperion. Also included are six chansons by Jean Guyot de Châtelet (his name is sometimes Latinized to ‘Castileti’).

This collection is both historically fascinating and stunningly performed. The music is beautiful and sensuous, with the polyphonic arts familiar from sacred works of this period now put to the service of earthly emotions. An expressively melancholic vein pervades many of these works, and one can see them as a precursor to Monteverdi’s madrigals.

‘It’s not just that Cinquecento's ensemble and tuning are flawless, nor that with six highly individual voices they can create an amazing range of colours, but that with their multicultural forces they can fit effortlessly into the style of the music, whether the texts are in Italian, French or German … I am not aware that any of the 25 short pieces here has been recorded before: Monte (by far the most prolific madrigalist of all time) has here eight masterful pieces; Jean Guyot (so far as I can see, never previously recorded) has six charmingly gooey pieces in the manner of Gombert on speed; for the sovereign (and also prolific) Vaet we hear the only non-Latin pieces he composed, all three of them; and the record ends with a mouth-watering selection of songs in German and Italian by the more light-hearted Regnart. Don’t miss it’ (Gramophone)

Philippe de Monte, Jean Guyot and Jacobus Vaet all belong to that generation of composers born around 1520, within a few years of Josquin’s death. Each illustrates in his own way how a successful career in the European musical world of the Renaissance could be achieved, and between them they established a path for future generations to follow, as did Jacob Regnart, born a couple of decades later. All four started their careers similarly, Monte in Mechelen, Vaet in Kortrijk, Guyot in the Principality of Liège, and Regnart in Douai—all benefited from a strong choir-based musical education that nurtured their talent. The four cantors could then have decided to remain in their homeland, where it would not have been difficult for them to have enjoyed the kind of professional success seen by Pierre de La Rue a generation before, and by their closer contemporaries Clemens non Papa and Thomas Crecquillon.

But the four composers had a choice: they could stay at home, travel and return, or leave their country to travel across Europe. Without any guarantee of getting a steady job, this latter option was risky. In the end, being endowed with the double talent of singing and composing created a good many opportunities for each to flourish, albeit within the limitations set by patrons and the Church—or even early death. Fate, personal decisions, chance encounters and political contingencies would, as it turned out, spin a web allowing our composers to share a degree of contact without, it would appear, necessarily meeting.

The death of Pieter Maessens (c1505–1562) opened the way for his compatriot Jean Guyot de Châtelet (c1512–1588) to apply in 1563 for the prestigious post of Kapellmeister to the court of Ferdinand I. Previously enjoying the enviable position of succentor at St Lambert’s Cathedral and already known for some of his motets and the thirteen songs published in Antwerp by Tylman Susato (with his name Latinized as ‘Castileti’), Guyot’s evident desire for a successful career in Vienna was to be disappointed; less than a year after his arrival he was paid-off from imperial service for the sum of fifty Florins. This coincided with the accession of Maximilian II, and the new Emperor placed his favourite musician, Jacobus Vaet, at the head of his chapel. Guyot returned to Liège where he spent the rest of his life teaching, supported by a benefice he had been able to retain.

Jacobus Vaet (c1529–1567) had been a chorister in his native Kortrijk in the mid-1540s and had first joined Maximilian II’s chapel in 1554. His name is mentioned amongst Charles V’s singers, but it is not known beyond this what he did between the end of his studies at Leuven University—Guyot had attended the same faculty—and his obtaining so sought-after a job in the circle of this illustrious prince. Ten years later the same patronage led to his being appointed ‘Obristen Kapellmeister der römisch-kaiserlichen Majestät’, the position previously held by Guyot under Ferdinand I. Maximilian clearly held his composer in deep affection, but Vaet’s successful career was to be suddenly cut off by his death in 1567.

Maximilian allowed the post held by Vaet to remain vacant for several years. But the emperor was also ambitious for his chapel: to raise its prestige, and presumably to guide it to new musical highs, Maximilian looked towards Italy, unsuccessfully approaching Palestrina himself. In the end, Maximilian was compelled by politics to modify his ambitions: the court already abounded in Italian musicians. The appointing of a Flemish Kapellmeister would afford him political consensus and support such as could never have been achieved by recruiting an Italian, however exceptional the latter might have been.

It had been clear since the recruitment of Vaet in 1554 that Maximilian was being well advised when it came to choosing his musicians. The chosen successor to Vaet was Flemish, had travelled extensively, and had mastered a variety of composing styles—from songs to madrigals, in the Flemish, Italian, French and German styles: Philippe de Monte (1521–1603) was to hold the position in Vienna for some thirty years. Already by the time of his arrival, Monte had built up a sound reputation and, unlike Guyot or Vaet, he was widely travelled, particularly in Italy, and had an impressive number of publications to his name. Under his direction the imperial court became the musical beacon of Europe in the last third of the sixteenth century, matching easily the chapels set up by Philipp II in Spain or by the dukes of Bavaria.

Jacob Regnart (c1540–1599) features prominently among the singers who contributed to the musical reputations of Vienna and Prague. He arrived at the imperial court perhaps as early as 1557 and may therefore have been witness to the succession of his countrymen at the helm of the chapel. It was a post he never held himself, having to be content with subordinate (though essential) positions. Perhaps this is what prompted him to accept occasional employment elsewhere, but he never forgot his first job and ended his career in Prague, working under Monte.

While these musicians’ careers have a common thread running through the imperial chapel, their compositions are clearly distinct in both style and genre. Jean Guyot devoted himself to writing motets and songs. The musical style of his songs is not so very different from that of his motets (some of which require many musicians and so were presumably composed for the imperial chapel), but they do demonstrate strong syllabic declamation, often enlivened by the vivid prosody. This is particularly evident in the ‘rustic’ songs like Je suis amoureux d’une fille. The overall rhythm slows down in the more melancholic songs, such as En lieux d’esbatz m’assault melancolie, but nothing interrupts the ruthlessly imitative counterpoint—which makes the text more or less unintelligible. This is a shame (although the modern listener benefits from the printed text), for the music abounds in highly ingenious and sometimes quite daring parallels between the text and its musical expression. A remarkable example occurs in the last verse, ‘Helas donnez vous à son cueur’, of Vous estes si doulce et benigne. As one might expect, the word ‘Helas’ brings about a distinctive harshness, but uses a ‘prohibited’ chord; to avoid this, an option is to flatten the bass note, something which causes a rather surprising, though not unattested in earlier examples, destabilization of the harmonic process, and this is what the singers here have chosen to employ. Similarly, other pieces show a liking for figuralism borrowed from Italian madrigalists. In L’arbre d’amour ung fruict d’amaritude, a strikingly original piece if only for being notated for four high voices, various harmonic false relations emphasize bitterness. The last two Guyot songs (Vous perdez temps and Tel en mesdict) comprise a Chanson–Response pairing, the first line of the one being the same as the last of the other. The Chanson takes its text from Clément Marot, and while the Response is by an anonymous author, the two parts are bonded into a homogeneous structure by common animated rhythms and are clearly inspired by the satirical mind of the ‘prince of French poets’.

Just three songs by Jacobus Vaet appear in print, and these in anthologies by different publishers: Sans vous ne puis (Phalèse, 1554), Amour leal (Waelrent, 1556) and En l’ombre d’ung buissonet (Neuber, 1568), making them slightly later than Guyot’s songs. All employ a standard group of four voices. It would appear Vaet was more responsive to the Mass and motet genres and his three songs, eschewing the rhetorical subtleties of Guyot, demonstrate how closely motet- and song-writing in the mid-sixteenth century were related.

Both before and after Philippe de Monte’s appointment to the Viennese court, the principal publishing houses of Europe issued a steady flow of his motets, Masses, madrigals and songs, and in the genre of the five-voice madrigal he was a pioneer. Musicology has often unjustly criticized Monte for lacking originality. A song like Sortez regretz may indeed adopt forms that had been used by Gombert a generation earlier, but the result is nonetheless imbued with a uniquely sorrowful beauty. With the five-part Susanne un jour, however, Monte breaks away from his predecessors in being the first of just three composers of his day (the other two are Millot and Du Caurroy) to disregard completely the cantus-firmus structure in order to adopt a madrigalian form, freely composed, and only using short motivic restatements.

Osmosis within the secular genres did not confine itself to French chansons. Borrowings from the madrigal or from motets can also be found in German-texted songs such as Venus du und dein Kind, a lovely villanelle for three voices by Jacob Regnart, whose compositions are a high-point of the late sixteenth century.

Unlike the French song of the second half of the sixteenth century, the earlier development by Flemish masters of the chanson is encapsulated in the works of these four composers. Working towards a stylistic synergy within diversity of textual expression, these composers drew both on their illustrious compatriots—Gombert as well as Crecquillon and Clemens non Papa—and on their own experiments. Vaet took inspiration from the motet; Monte from the madrigal; Regnart turned towards lighter Italian forms; and Guyot embedded himself unashamedly in the traditions of the Low Countries. But all found ways of writing which shared, in whatever language, the deep links unifying text and music in the twilight of the Renaissance.