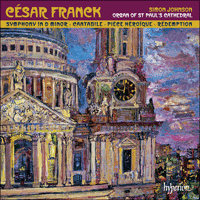 The Grand Organ (and massive acoustic) of St Paul’s Cathedral brings the symphonic organ works of César Franck to life, played by Simon Johnson, the current Organist of St Paul’s Cathedral. He plays his own transcription of Franck’s Symphony in D minor, a troublesome work which was despised by critics at its premiere. The paradox of the Symphony was memorably defined by Norman Demuth: ‘Never was there such magnificent music so badly written.’ The present transcription may be seen as an authentic response to that paradox, particularly since modern advances in console control enable Franck’s orchestration to be used as the outline for a detailed registration plan.

The ‘Symphonic Interlude’ that separates the two parts of the oratorio Rédemption has not acquired the popularity that it deserves. Franck described the subtext of the work as ‘the joy of the world, transformed and gladdened by the word of Christ’. It is built on two main thematic ideas, the first a gloriously noble tune that Emmanuel Chabrier described as ‘the very soul of music’, and the second an energetic peal from the trombones, with responses and modulations from the brass and woodwind. The two are developed and combined ingeniously.

‘I am totally convinced throughout this splendid album by Johnson's playing, which is superbly poised and magnificently self-assured’ (Gramophone)
‘Transcribing Franck's D minor Symphony for organ works extremely well. Simon Johnson's performance on the instrument at St Paul's Cathedral is deftly paced, and the shorter pieces are also enjoyable’ (BBC Music Magazine)» More

‘This new Hyperion recording of Franck's Symphony in Simon Johnson's transcription and played by him on the great organ of St Paul's Cathedral is an impresssive and enlightening experience. Johnson clearly has the measure of the work … I was enthralled throughout. The Cantabile and the great Pièce héroïque are very finely performed … the detail in the recording is surprisingly good considering the venue, and the engineers have to be applauded for capturing this magnificent instrument in its more refined and gentle registration … Johnson's performance is beautifully paced throughout’ (International Record Review)» More

‘Oh, what arid and drab music, without any touch of grace or charm, without a smile! Even the themes are often lacking in interest.’ (Camille Bellaigue, reviewing the first performance of the Symphony in D minor in the Revue des Deux Mondes, 15 March 1889)

From the moment that it was first performed, Franck’s Symphony in D minor has provided us with one of the great conundrums of musical history. Posterity has largely discarded Bellaigue’s view, but the work remains problematic for performers and academics alike. Perhaps it was not so much the themes as the way in which they were presented that aroused reviewers’ hostility. The form and orchestration of the work are controversial; in both we must acknowledge the influence of the organ.

The formal plan of the Symphony has a clear precedent in the Grande Pièce symphonique (for organ) of 1863: both are cyclic, their first movements use variants of a Sonata-Allegro form, the second movements are a compression of the symphonic slow movement and scherzo, and the third movements recall, in the manner of Beethoven, all the themes previously exposed. The influence of Wagner on Franck’s creative thinking (particularly the Prelude to Tristan, which he heard in 1874) might be said to be the defining difference between the two works, the Symphony being far more free-flowing and expansive. Nonetheless, questionable procedures, for example the double exposition in the first movement and the ‘crucible’ of themes in the third, are also indicative of another influence: the organist/master improviser at work. Parisian liturgies of the time were heavily reliant upon improvisation, and the remote position of the instrument and player high at the back of the building made thematic clarity and vividness essential if the congregation were to follow the musical structure.

If criticism of the work’s form was harsh, the orchestration aroused even greater disapproval. The instruments are used in blocks, there is much doubling, the woodwind is frequently asked to contribute little more than crescendo and diminuendo to the ensemble, whilst the brass merely punctuates the big moments. We see in Les Éolides (1876) a composer capable of exquisite touches of orchestration, so we may assume that the broader approach with the later Symphony was deliberate. Léon Vallas’ comment that the orchestration is ‘easily explained, even excusable, when considered in relation to the organ’ carries significant weight: we hear the ghosts of registration changes, manual changes, and use of the swell box in the orchestral original. Franck regretted the experiment, declaring that he would ‘write the wind parts quite differently if there was ever a question of revising the work’.

Given that this didn’t take place (Franck died a year and a half after the first performance), the issues outlined above suggest that an organ transcription may be a valid contribution to our understanding of the work. The paradox of the Symphony was memorably defined by Norman Demuth: ‘Never was there such magnificent music so badly written.’ The present transcription may be seen as an authentic response to that paradox, particularly since modern advances in console control enable Franck’s orchestration to be used as the outline for a detailed registration plan.

There were other reasons why the Symphony initially struggled, not least the political situation of the time. The domain of the symphony was considered by many in France to be Germanic, and Franck’s absorption of the influences of Beethoven, Wagner and Liszt served to confirm suspicions that his music was anti-French. The orchestration, too, pointed towards a Teutonic sound world and away from the more subtle ‘French’ touches exhibited in contemporary works such as Saint-Saëns’ ‘Organ’ Symphony. Nationalistic attitudes may be wholly attributed to the relatively recent Franco-Prussian War (1870–1871). The Société nationale de musique was founded in 1871 in part as a response to anti-German sentiment aroused by the war (their motto was ‘Ars gallica’). A confrontational split in the Société in 1886—the same year that Saint-Saëns completed his ‘Organ’ Symphony and two years before Franck’s—brought the matter of foreign music to a head. The conservative Saint-Saëns was against its promotion whilst the revolutionary Franck supported it: the resulting atmosphere within the French musical establishment was poisonous. The reviewer Bellaigue was not alone among journalists in supporting Saint-Saëns, with whom he also enjoyed a close friendship.

It has been suggested that the Pièce héroïque (1878) is a tribute to the defeated but ‘morally victorious’ French army following the war. There is little other than anecdotal evidence to support this but the Trois pièces (of which the Cantabile and Pièce héroïque are the second and third) are the only significant organ pieces by Franck not to contain specific dedications, thereby leaving programme annotators leeway for the creation of historical fictions (or unconfirmable ‘discoveries’?). Franck’s pupil Charles Tournemire himself poses the question: ‘Was he writing of heroic glory or of a personal victory? We prefer the second hypothesis.’

Franck gave the first performance of the Trois pièces on 1 October 1878, in the Salle des Fêtes (Festival Hall) of the new Palais du Trocadéro, which had been built for the Universal Exhibition held in Paris that year. Written specifically for the occasion, which was probably the most important recital of Franck’s career, they are concert pieces with no specific religious intent. Two of Franck’s most devoted disciples couldn’t help ascribing a spiritual element to the exquisite Cantabile, however, Vincent d’Indy noting that it is ‘the typical prayer of an artist who is also a true Christian’, and the ever-devout Tournemire eulogizing: ‘The soul’s unsatisfied desire—a saint’s inner supplication—incessant pleas—faith in divine mercy.’ Whatever the context, the Cantabile was something of a hit for Franck. Pièce héroïque—now a hugely popular work—met with critical apathy at first, the reviewer from the Revue et Gazette musicale de Paris noting of its place in the recital that ‘although containing some excellent things, [it] seemed less interesting than the other works’. Franck never played it in public again. The version here uses the original (unpublished) ending from the Trocadéro performance.

In terms of their place in Franck’s musical canon, the Trois pièces are significant for being the first of his organ works where the liberating influence of Wagner came to be realized. Within his wider œuvre, the key transitional work in that development was the Symphonic Interlude from Rédemption (1874).

History has judged Franck’s symphonic, chamber and organ music rather more kindly than his vocal works. For this reason, the Symphonic Interlude that separates the two parts of the oratorio Rédemption has not acquired the popularity that it deserves.

Franck described the subtext of the work as ‘the joy of the world, transformed and gladdened by the word of Christ’. It is built on two main thematic ideas, the first a gloriously noble tune that Emmanuel Chabrier described as ‘the very soul of music’, and the second an energetic peal from the trombones, with responses and modulations from the brass and woodwind. The two are developed and combined ingeniously.

Marcel Dupré made a transcription of the Symphonic Interlude that he played before Midnight Mass at the church of Saint-Sulpice in Paris, where he was the organist. The tradition of playing the work was carried on by his successors, Jean-Jacques Grunenwald, and the present titulaire, Daniel Roth, who made his own more detailed version that forms the basis of what is recorded here.

Whether writing for organ or orchestra, in short or extended form, Franck’s musical thinking was on the grandest possible scale, always slightly bigger than we are ourselves capable of imagining. Perhaps that is why his works are so often given religious connotations. He was a devout Christian, but one who saw the bigger concepts in simple terms. Asked whether his Symphony embodied any particular idea, Franck replied: ‘No, it is just music.’ Although critical acclaim largely escaped him in his lifetime, the works represented on this recording suggest a man at peace with himself. Among Franck’s closest disciples he was known as ‘Pater Seraphicus’. In the limitless expanses of his mature works we also hear ‘Pater Ecstaticus’.

The Grand Organ of St Paul’s Cathedral
Built by Bernard Schmidt (‘Father’ Smith) in 1697 with a case designed by Sir Christopher Wren and carvings executed by Grinling Gibbons, some pipework of the original organ survives to this day. It was reconstructed to its present layout in the chancel by Henry (‘Father’) Willis in 1872 and enlarged to five manuals, including a section in the North East Quarter Dome gallery, in 1900. Henry Willis III was responsible for further alterations and electrification of the action in 1925–1930. After war damage the organ was repaired in 1946 and 1949 and more repairs were made in 1960. From 1972–1977 NPMander Ltd reconstructed the whole of the action, soundboards and console, preserving the pipework surviving from the Willis instrument of 1872 but broadening the resources of the organ with much new material, notably the new North Choir, Dome Chorus and West sections. The instrument was restored in 2007–2008 by Mander Organs Ltd, with the provision of new Dome Tubas and, through the generosity of Roger Gabb, son of Harry Gabb (Sub-Organist, 1946–1974), a second, mobile console for use under the Dome.

CHANCEL SECTION (Undated stops are from 1872)