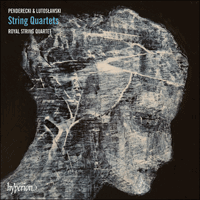 This wonderful young Polish ensemble continue their exploration of the string quartet repertoire of their homeland with this album of music by two giants of the twentieth century.

Witold Lutoslawski, whose centenary is celebrated in 2013, wrote his one and only string quartet in 1964 and it has since maintained an eminent position in the international repertoire. Krzysztof Penderecki (born 1933) was the most talked-about Polish composer in the early 1960s and remains an important presence in contemporary music. His three string quartets (1960, 1968 and 2008) are key works in the history of the post-war Polish quartet.

‘Whatever this music's challenges … the Royal String Quartet meet them head on … spacious and immediate sound, along with informative booklet notes: those for whom the present coupling appeals should not hesitate’ (Gramophone)
‘The Royal String Quartet, with a detailed, clear recording, give Penderecki's First Quartet a natural precision and direction … [Lutosławski's quartet] packs emotional punch. This is great chamber music’ (BBC Music Magazine)
‘Powerfully dramatic and moving’ (The Daily Telegraph)
‘Fine, natural engineering lets the music, and these mind-blowing performances, speak for themselves’ (International Record Review)
‘With its warm, generous sound, and its performances of emotional depth and searing intensity, this is an extremely fine disc’ (The Strad)
‘That Lutosławski had a more avant-garde side is borne out by his String Quartet of 1965 … the result, in this performance by the Royal String Quartet, is as potent as it is innovative. On the same disc, Lutosławski’s younger compatriot Krzysztof Penderecki is represented by his three quartets—the first two obsessed with isolated percussive sonorities and the third unashamedly harmonious’ (Financial Times)
‘The Royal String Quartet’s performance affords clarity to every layer of Lutosławski’s musical vision, reminding us yet again that even when dealing with fierce complexity, his music is always precisely balanced and effortlessly economical. These musicians bring a wealth of distinctive characterisation to the piece, making for a gripping and invigorating experience, explicitly recorded’ (Classical Source)

The history of the Polish string quartet is quite a short one, in essence less than one hundred years old. Examples from the eighteenth and nineteenth centuries are few and far between, and it was only after Karol Szymanowski’s two quartets (1917 and 1927) that the genre began to make headway in Poland. This was in large part thanks to the establishment, especially after the Second World War, of quartets such as the Wilanów, Varsovia and Slaski (Silesian). Now younger Polish quartets are making their international reputation, including the Royal String Quartet heard on this recording.

Initially, the genre was kept alive in the 1940s and 1950s almost single-handedly by Grazyna Bacewicz, who consolidated her position as the major Polish exponent when she completed her seventh, and final, string quartet in 1965. By that point, however, two other composers had made their presence felt abroad as well as at home, not only with their exploratory orchestral and vocal-instrumental music but also with their quartets. Witold Lutosławski (1913–1994) wrote his one and only string quartet in 1964 and it has since maintained an eminent position in the international repertoire. Krzysztof Penderecki (born 1933), a generation younger than Bacewicz and Lutosławski, was the most talked-about Polish composer in the early 1960s. His Threnody for the victims of Hiroshima for 52 strings (1960–61) created a sensation wherever it was played. His three string quartets (1960, 1968 and 2008) are key works in the history of the post-war Polish quartet.

Penderecki’s String Quartet No 1, which was premiered in Cincinnati in 1962 by the LaSalle Quartet, is one of the group of works from 1960–62 that secured his international reputation. It is also the shortest, but it packs a punch in its seven minutes. It is formed of two panels, roughly equal in length, of which the first provides material for the second. This material consists not of melodies, harmonies or regular metres and rhythms but of a range of unconventional sounds measured against nominal one-second ‘barlines’. This sound-world became known within Poland as ‘sonorism’, an approach to composition that broke with tradition wherever possible.

The first panel opens with a challenging instruction for the players to perform tremolo without using the bow. As their lines develop into glissandi, Penderecki begins a series of slow-burning interpenetrations of ideas as various as playing between the bridge and the tailpiece, striking the strings with the palm of the hand, hitting the strings col legno (with the wooden back of the bow) and playing the highest possible note pizzicato. The music slows perceptibly through longer note values, then pauses.

The second panel presents the ensemble in a more uniform light. Different sonoristic textures are explored in soundblocks, sequentially rather than simultaneously. Penderecki also introduces new sounds, such as bows playing on the tailpiece of the instruments. Despite a brief return to the heterogeneous textures of the first panel, the impression is one of the isolated dispersal of its elements, rather than any attempt at conventional coherence.

By the time that he wrote his String Quartet No 2 (1968), Penderecki had begun to broaden his appeal in monumental vocal-instrumental works such as the St Luke Passion (1965) and Dies Irae (1967). The quartet, however, maintains the orthodox sonoristic approach of its predecessor, with certain modifications. Gone are most of the percussive performance techniques, developing instead the idea of homogenous ensemble textures with which the first string quartet concluded. These are now extended over broader time-spans.

The second quartet opens with a tight sfff subito pppp semitonal cluster, which then proceeds slowly to develop flights of fancy. The pace quickens in scurrying semiquavers, incorporating quartertones, heterophonic textures, and guitar-like strumming in glissandi. When rhythmic unison is briefly established, this triggers what might be regarded as a traditional interplay of motivic ideas, akin to a development. And although new soundblocks continue to be introduced, there is little sense of a recapitulation, although Penderecki seems to allude to some of the early textures.

Six years after the premiere of the second string quartet by the Parrenin Quartet in Berlin in 1970, Penderecki made a decisive break with the language of sonorism. The turning point was his Violin Concerto (1976), and since then he has explored a more harmonious, post-Romantic idiom which links him with Bruckner, with the Polish composer Mieczysław Karłowicz, and with Shostakovich. He has also expanded his chamber-music output, and in 2008 he completed his String Quartet No 3, ‘Leaves of an unwritten diary’. It was premiered in Warsaw that same year, on the composer’s seventy-fifth birthday, by the Shanghai Quartet.

With its opening E flat minor triad, against which the viola (one of his favourite instruments) unfolds a melody, the third string quartet belongs in a completely different world than that of its predecessor forty years earlier. It provides a retrospective if not sentimental glance at his preoccupations over this period. There is the halting, sometimes grotesque waltz based on a repeated minor third. There are also passages where his sonoristic heterophony seems to have been recast in diatonic terms. There is even, in the latter stages, a recollection of a gypsy violin tune that apparently his father played to him in his childhood. Above all, the third string quartet, despite a clear recapitulation of the minor-third waltz section, bears the hallmark of the composer’s restless switching from one idea or tempo to the next. Penderecki’s three string quartets therefore have more in common than might at first appear, and they embody the concept that an artist may change style but not character.

Witold Lutosławski was not a prolific composer, and his contribution to chamber music was not large. Just as the single quartets by Debussy and Ravel hold a significant position in the repertoire, so too does Lutosławski’s only quartet. It was premiered by the LaSalle Quartet (like Penderecki’s first), in Stockholm in 1965. The LaSalle players were at the forefront in the promotion of new music, especially the works of Schoenberg, Berg and Webern, but even they were surprised when the new piece arrived, with individual parts but no full score.

There was a good reason for this, as Lutosławski explained to the leader, Walter Lewin: ‘The piece consists of a sequence of mobiles which are to be played, one after another, without any pause if there is no other indication. Within certain points of time particular players perform their parts quite independently of each other … if I did write a normal score, superimposing the parts mechanically, it would be false, misleading, and it would represent a different work. That would deprive the piece of its “mobile” character, which is one of its most important features.’ In the end, Lutosławski’s wife Danuta, who wrote out the full scores and parts for many of his pieces, designed a large-format score where, within each ‘mobile’ in the sequence, each of the four parts was boxed separately in the standard vertical order, thus thwarting any chance of fixing the moment-to-moment alignment.

At the heart of Lutosławski’s concept in the 1960s was giving great flexibility to his performers while at the same time controlling the psychological and expressive direction of the music. The idea of these mobiles—which in later years he sometimes referred to as ‘bundles’—was that their internal character would be shared by the players through carefully sequenced rhythmic or melodic motifs and an underlying harmonic design.

The two movements are headed 'Introductory' and 'Main', with proportions of roughly 1:2. The quartet opens with a fragmented ‘monologue’, as the composer called it, played by the first violin and lasting almost two minutes. After being joined by the other players, the first violin intervenes briefly, before being united once again with the rest of the quartet. Once again, the ensemble is interrupted, this time by octave C naturals on the cello. A pattern has been set of ensemble musings interrupted by forthright C naturals, and this becomes the framework for the rest of the movement.

Lutosławski described his intentions in this way: ‘The octave framework intervenes as it were in the middle of a word. The result is a lack of satisfaction, since each episode does not actually fold up at the end, it is not completed but brusquely interrupted. This is the means of achieving the ‘uncompleted’, ‘unsatisfactory’ character of the whole introductory movement.’ A signal moment comes after the extensive C natural octave repetitions just before the movement ends. The figure becomes chromatically distorted and is played pizzicato, until the cello emerges to launch the second, 'Main' movement.

From the outset, this thrusts forward, dynamically and rhythmically alert, yet still organized as a sequence of ‘mobiles’. Partway through, the cello recalls its distorted pizzicato chord from the end of the 'Introductory' movement. On its first appearance, it sets off high keening violins, on the second, low scurryings. The fifth time, the whole ensemble joins in. In this way the ‘framework’ galvanizes the 'Main' movement towards the Appassionato section. This climactic passage eventually wastes away, reduced to isolated high pitches, a reminiscence, perhaps, of the quartet’s opening monologue.

It might seem that the 'Main' movement was exhausted at this point and coming to a close. Lutosławski has a surprise up his sleeve, because there are three highly expressive sections to come, what he once termed ‘Chorale figures’ (quiet sustained notes marked indifferente), ‘Funèbre figures’ (beginning on a unison F sharp) and a ‘series of short comments on [what] has just happened, and a farewell, an exit’. These final ‘mobiles’ therefore have a retrospective quality, brief recollections that emphasize the extraordinary potency not only of Lutosławski’s musical language but also of the innovative format in which he conceived and realized this string quartet.