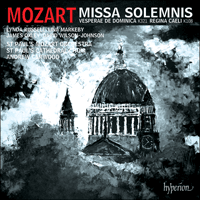 After almost a decade, Hyperion is delighted to welcome back the world-famous St Paul’s Cathedral Choir under its new director of music, Hyperion artist and also director of The Cardinall’s Musick, Andrew Carwood. Joined by the St Paul’s Mozart Orchestra and a quartet of renowned soloists, Carwood leads sparkling performances of a selection of Mozart’s sacred music. Although they were commissioned to be sung at church services in Salzburg, all these compositions are suffused with Mozart’s typically unerring sense of dramatic pacing and a sensuous, operatic treatment of solo lines, as well as crisp and energetic choral writing.

‘Most of the music here is performed by the good soloists and enthusiastic chorus with gusto, so the chief impression is of lusty praise, though there are some delightfully fairly florid solo passages where Mozart's adoration of the female voice is more evident than his devotion to God’ (BBC Music Magazine)
‘Mozart's musical planning is exemplary; this is a subtly devised and well-executed record’ (International Record Review)
‘The music itself is joyous and comforting. The St Paul’s Cathedral Choir (comprising boy choristers and Vicars Choral) sings superbly, the playing of the St Paul’s Mozart Orchestra (very much ‘authentic’) is poised and polished, and there is a notable contribution from Simon Johnson on the lovely organ of St Giles’ Cripplegate, where these performances were so excellently recorded. Add in four fine vocal soloists and we have sacred music that is uplifting and engaging. Texts are included and the conductor writes the helpful booklet note’ (Time Out)

Having learned to play straightforward pieces on the piano by the age of four, it is thought that Wolfgang Amadeus Mozart (1756–1791) gave his first public performance in his home town of Salzburg in September 1761. In 1762 he played for Maximilian III, the Elector of Bavaria, and from then on his early life was a whirlwind of tours and concerts, with visits to nearly all of the major centres of music-making in mid-eighteenth-century Europe: between June 1763 and the end of 1767 Mozart visited Germany, France, the Low Countries, England and Switzerland. He was mentored by, or perhaps some in the modern age would say exploited by, his father Leopold who also saw to his general education.

Leopold Mozart (1719–1787) spent most of his life as a musician at the Court of the Prince-Archbishops of Salzburg. By the time that Leopold and his family began their travels they were supported by Archbishop Siegmund Christoph von Schrattenbach (1698–1771) who not only allowed Leopold time away from his position as Vice-Kapellmeister but also provided some financial support for these foreign tours. Schrattenbach was an ultra-conservative and a patron of the arts and, relatively speaking, a ‘popular’ Archbishop. The same could not be said of his successor Hieronymus Colloredo (1732–1812) who, after a controversial election, became Prince-Archbishop on 14 March 1772. Colloredo has suffered a bad press over the years and it is certainly true that he was less immediately appealing as a person than Schrattenbach. Serious-minded, misanthropic and never outwardly fond of his fellow human beings, he nonetheless was a strong supporter of the new ideas of the Enlightenment, and successfully reformed the Salzburg court now in financial ruin after Schrattenbach’s massive over-spending. Both Leopold and Wolfgang made clear in their letters that they had little respect for Colloredo, who was difficult over their requests for absence, had a policy of requiring musical compositions to be shorter, and began advancing Italian musicians above native Austrians. Colloredo never achieved any measure of popularity and was forced to leave Salzburg in 1800 with Napoleon poised to attack the city. He resigned in 1803 and control of the city was passed to the Grand Duke of Tuscany. In so doing he became the last of the Prince-Archbishops: Salzburg would never again be ruled by a cleric.

Colloredo had a genuine liking for music (he himself played the violin) but was no fan of fuss or lengthy compositions in the liturgy. Mozart wrote to Padre Martini, his one-time teacher in Bologna, that he was severely restricted in the music he could write for the Mass:

Our church music is very different from that of Italy, since a Mass with the whole Kyrie, the Gloria, the Credo, the Epistle Sonata, the Offertory or Motet, the Sanctus and the Agnus Dei must not last longer than three quarters of an hour. This applies even to the most Solemn Mass said by the Archbishop himself.

It is certainly true that, after Colloredo’s elevation, Mozart uses a more efficient, syllabic style, but his music is still suffused with brilliance and fine touches of drama. He produced over fifty sacred compositions whilst in Salzburg, using a variety of styles and clearly experimenting with ideas which were to reach their fulfilment in later works. The gorgeous ‘Agnus Dei’ solo from the Missa solemnis in C prefigures the Countess’s aria ‘Porgi amor’ from Le nozze di Figaro whilst the keyboard obbligato writing of the Epistle Sonata in C clearly points the way to the piano concerti.

The Missa in C major (‘Missa solemnis et brevis’, K337) is the last Mass-setting written for Salzburg, and indeed the last Mass which the composer completed. It bears the date March 1780 as does the Epistle Sonata (K336) which, almost certainly, is a companion piece. Masses in Salzburg are usually described either as ‘longa’ (‘long’) or ‘brevis’ (‘short’) but this setting is yet another form. It is ‘brevis’ in that it is quite efficient, but Mozart also uses the title ‘solemnis’ (‘solemn’) indicating its suitability for a grand occasion and highlighting the augmented instrumentation. The Mass is scored for strings (without violas) and has three trombone parts doubling the alto, tenor and bass parts of the chorus, but it is further enhanced by trumpets, timpani, oboes and bassoons.

The first three movements of K337 are in a style of which the Archbishop would most certainly have approved. The ‘Kyrie’ has a rather subdued opening but one which is solemn and penitential (not always the case in settings from this period). The ‘Gloria’ stands in contrast with its bustling instrumental writing and energetic choral parts and moves through the text at some speed. Only in the final ‘Amen’ does Mozart allow himself a little liberty with two coloratura sections for the soprano soloist. The ‘Credo’ continues the energetic mood and uses a rondo-like form with Mozart repeating an infectious swinging motif throughout the movement. After the ‘Credo’ things begin to change as Mozart starts to assert his own musical priorities as well as perhaps making a pointed gesture at Colloredo. The Archbishop had no time for fugues in music which could be lengthy and involved repetition of the text: he also disliked extended solos such as those sung by great divas in the opera houses. The ‘Sanctus’ begins in a solemn style but leads to a rather cheeky ‘Osanna’. For the ‘Benedictus’ there is a real change of direction as Mozart uses a serious-sounding fugue in A minor and unusually makes no use of the soloists before the return of the ‘Osanna’. Even more mischievously, he writes a gorgeous aria in the contrasting key of E flat major for the ‘Agnus Dei’, one that belongs more to the world of opera than to that of church music, and which also features an obbligato organ part and exquisite oboe and bassoon writing.

The Epistle Sonatas, or organ sonatas, had a very particular function in Salzburg Cathedral, namely to cover the period of movement during Mass after the reading of the Epistle and before the reading of the Gospel: hence the inclusion here of the Sonata in C (K336) between the ‘Gloria’ and ‘Credo’ of the Missa solemnis. Mozart produced seventeen such sonatas, the majority of which are scored for just strings and organ and all of which use sonata form with first and second subjects, a truncated development section and recapitulation. In this last sonata written before his removal to Vienna, Mozart has provided a glorious obbligato part for the organ including the opportunity for a final cadenza.

Mozart produced three settings of the Regina caeli, the text in honour of the Virgin Mary designed to be said or sung throughout the season of Easter. It is thought that the Regina caeli in C (K108) was written in May 1771 for Maria Magdalena Lipp (the wife of Michael Haydn). The four-movement setting is certainly festal and sets two extended arias for soprano (Colloredo did not become Archbishop until 1772!) framed by two energetic outer movements for orchestra and choir. The second movement is a graceful slow dance made even more lilting by the addition of flutes and the gentle interjections of the chorus. The exquisite gem of this setting is the third movement ‘Ora pro nobis’ which clearly shows the influence of the sort of sacred music that Mozart would have encountered in Naples, whilst the final movement contains an early prefiguring of Figaro and Susanna’s duet ‘Se a caso madama’.

Alongside the regular celebration of the Eucharist, the other service which required large-scale musical input was the Office of Vespers, consisting of five Psalms and the ‘Magnificat’. Mozart wrote two complete settings for Vespers (although he never set the opening Response nor the Antiphons which are used to frame the Psalms and Canticle). The Vesperae solennes de Dominica (K321) or ‘Sunday Vespers’ could be used on many of the Sundays throughout the year, unless a particular feast day or season required the use of a different set of texts. Scored for four soloists and chorus, Mozart once again uses trombones to double the lower chorus parts. The strings (without violas) play throughout but trumpets and timpani are added to the first Psalm and the ‘Magnificat’ for extra solemnity.

‘Dixit Dominus’ is grand and imposing, complete with dogmatic statements from both choir and instruments, whilst the second Psalm, ‘Confitebor tibi’, is a serious-sounding movement in E minor with the chorus replying to the soprano soloist. The next three Psalms display radically different styles. ‘Beatus vir’ is more brilliant and more operatic in its writing whilst the fourth Psalm ‘Laudate pueri’ is the complete opposite; a ‘stile antico’ canon, with an alla breve swing and without the use of soloists. Also in juxtaposition is the graceful and operatic ‘Laudate Dominum’ for soprano solo and organ obbligato, the perfect change of style before the dramatic coup of the ‘Magnificat’ which begins with a slow, solemn introduction before launching into a vigorous allegro.

It is almost as if Mozart is demonstrating the whole range of his musical genius here with radically different styles for each movement. All of these composed elements of Vespers would originally have been separated by Antiphons, sung to plainchant, and it is clear from the choice of keys—C major, E minor, B flat major, F major, A major and C major respectively—that the Antiphons would provide a musical link between the Psalms. However Mozart once again shows his dramatic genius and his clear sense of narrative. These individual Psalm movements are so ordered that there is a real dramatic progression, a musical journey which goes through a variety of regions before culminating in an almost symphonic setting of the ‘Magnificat’. It was this deep understanding of drama, this ability to lead with a clear sense of the effect that his music would have on the listener which allowed Mozart to write great opera and this, his great gift, is clearly seen first in his music for the church.