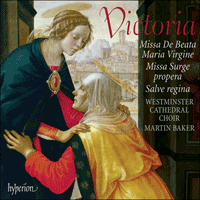 Following the success of the Westminster Cathedral Lay Clerks in their sumptuous men-only recording of Victoria’s Missa Gaudeamus, the choir returns to full ranks for a further issue in their survey of the Masses of this undisputed Master of the Renaissance.

This new recording opens with Victoria’s five-part setting of the Marian antiphon Salve regina, followed by two of the composer’s Masses: Missa De Beata Maria Virgine and Missa Surge propera, which is preceded by its Palestrina model. Released to mark the conclusion of a highly successful American tour, this album finds the choir in superb voice and the thrillingly involved sound is perfectly coloured by the Westminster resonance.

‘We hear the boys' voices—and what a wonderfully incisive and vivid sound they make, cutting through the swathes of echo like a hot knife through butter—floating angelically above a heaving wash of lay clerk harmony … polyphony designed to inspire feelings of sanctity and spirituality, and this recording captures that element to perfection. Martin Baker has a lovely way with the musical phrases, letting them emerge from the dark recesses of the cathedral, allowing them generous space in which to soar and float before gently subsiding back to the vast darkness from which they emerged. It creates a sensation of great timelessness … illuminating and deeply rewarding’ (International Record Review)

Tomás Luis de Victoria (1548–1611), the greatest composer of the Spanish sixteenth-century ‘golden age’ of polyphonic music, was born in Ávila in 1548 and died in Spain in 1611. In about 1558 he became a choirboy in Ávila Cathedral, where he received his earliest musical training. When his voice broke he was sent to the Collegium Germanicum at Rome where he was enrolled as a student in 1565. He was to spend the next twenty years in Rome, where he occupied a number of posts of which the most important were at S Maria di Monserrato, the Collegium Germanicum, the Roman Seminary (where he succeeded Palestrina as maestro di cappella in 1571) and S Apollinare. In 1575 he took holy orders and three years later he was admitted to the chaplaincy at S Girolamo della Carità. Around 1587 he left Italy and in that year took up an appointment as chaplain to the dowager Empress Maria at the Royal Convent for Barefoot Clarist Nuns in Madrid, where he acted as maestro to the choir of priests and boys that was attached to the convent. Victoria served the dowager Empress from then up to her death in 1603. After that and until his own death in 1611 he held the less arduous post of organist, but the terms of his continued employment at the Convent brought him such advantages that he is said to have turned down more than one prestigious invitation to become maestro di cappella elsewhere.

Victoria’s musical output was relatively small compared with other major Renaissance composers such as Palestrina and Lassus. The music he did publish, however, shows a generally very high level of inspiration and musical craftsmanship, and it is clear—from the constant revisions he made to the successive editions of his works that appeared during his lifetime and from some of his comments in prefaces to his works—that he adopted a highly critical attitude to what he wrote. His style shows the influence of earlier masters in the Spanish school and also that of his long stay in Rome, where it is likely that he had considerable contact with Palestrina. However, while he shares with Palestrina a liking for smooth conjoint melodic lines and carefully worked double counterpoint, his music contains (even after making allowance for changing conventions about the use of musica ficta) more accidentals and a subtle use of harmonic coloration which sets it apart from that of any of his near contemporaries and gives it that quality of passionate intensity for which it is so justly renowned.

Giovanni Pierluigi da Palestrina (1525/6–1594) is thought to have been born in Palestrina, a town in the Sabine hills near Rome, and his first musical training seems to have been in Rome at S Maria Maggiore, where he was listed as a choirboy in October 1537. In October 1544 he was appointed as organist at the cathedral of S Agapito in Palestrina, where he remained until his appointment in 1551 as magister cantorum of the Cappella Giulia at St Peter’s in Rome. In 1554 Palestrina published his first book of Masses, dedicated to Pope Julius III. In January 1555 he was admitted to the Cappella Sistina, the Pope’s official chapel, on the orders of the Pope, without examination and despite being married. Three months later Julius III died and was succeeded by Marcellus II, who in turn died within about three weeks. The next Pope, Paul IV, insisted on full compliance with the chapel’s rule on the celibacy of its members and Palestrina, who had married in 1547 during his stay at Palestrina, and two others were dismissed from the choir in September 1555. In the following month Palestrina was appointed maestro di cappella at S Giovanni Laterano where he stayed until 1560, when he had a dispute with the chapter over the financing of the musicians. His next known employment was again at S Maria Maggiore, where he passed the next five years combining this post, between 1564 and 1566, with work for Cardinal Ippolito II d’Este. The latter work he continued on a more or less full-time basis until 1571, during which time he also taught music at the Seminario Romano. In April 1571 he took up his last appointment and returned to the post of maestro of the Cappella Giulia, where he remained until his death.

This recording contains two Masses by Victoria. We hear first the Missa De Beata Maria Virgine, preceded by a setting by Victoria of the Marian antiphon Salve regina. This Mass was published first by Angelo Gardano in Venice in 1576 and later by his brother, Alessandro Gardane, in Rome in 1583. It is a paraphrase Mass based on the twelfth-century Gregorian plainsong Mass IX, ‘Cum iubilo’ (designated as being for Feasts of the Blessed Virgin Mary), and Credo I. Much use of melodic material from the plainsong is made in Victoria’s setting but the individual movements of the plainsong Mass are not all in the same mode and clef combination, which means that, unless appropriate transpositions are made, it would not be possible to perform all the music with the same combination of voices. As Dr John Milsom has shown (in a most illuminating paper, ‘Clef and transposition: the evidence of sixteenth-century non-cyclic Masses’, which he read to the Early Music Centre Conference on ‘Pitch in Renaissance and Baroque music’ in 1981), in certain types of Masses which have been termed ‘non-cyclic’—i.e. Masses which are liturgically continuous but structurally diverse, mainly the Missa pro defunctis and the Missa De Beata Maria Virgine—the composer bases the various movements of the Mass on different plainsong melodies, often in different modes, which in turn leads to changes of tonal centre, written pitch and clefs between the movements. In such Masses the written pitch of the music is largely influenced by the plainsong cantus firmus, the tessitura and choice of clef for each movement being effectively determined by the mode, ambitus and final of its plainsong basis. In general, composers evidently preferred to leave the cantus firmus untransposed, writing their polyphony around it at whatever pitch that required and notating this in the most convenient clef.

Victoria follows this pattern and in the original manuscripts of the Mass the Kyrie is in mode 1, transposed up a fourth so that its final is on G; the Gloria is in mode 7, also with its final on G; the Credo is in mode 4 with a final on E; and the Sanctus, Benedictus and both settings of the Agnus Dei are in mode 5 with a final on F. Each movement of the Mass is written in chiavette—i.e. in a combination of high clefs—except the Credo, which is in a low clef combination. In order to provide a uniform grid of vocal ranges, the edition used for this recording transposes the Kyrie and Gloria down a tone and the Credo up a minor third and all the music has then been transposed into modern clefs at a pitch suitable for modern choirs.

The second Mass by Victoria in this recording is the Missa Surge propera. This is a parody Mass, based upon a motet of the same title by Palestrina, which was published in Rome by Alessandro Gardane in 1583. The motet was written for the Feast of the Visitation of the Blessed Virgin Mary (falling on 2 July). The text of the motet is taken from the Song of Songs, a biblical source of superb love poetry. As Michael Noone has pointed out, Victoria’s choice of this motet is consistent with his predilection for motets with texts taken from this source; no fewer than four of his fifteen parody Masses are based on motets whose texts are drawn from this controversial (at least in the sixteenth century) source of inspiration. It is interesting to note that, though the great bulk of Palestrina’s output was of sacred music, and he evidently thought of himself as primarily a composer of religious music, he nevertheless wrote a few books of secular and spiritual madrigals, and his fourth book of motets, published in Rome by Alessandro Gardane in 1584, was devoted entirely to settings of poetry from the Song of Songs. To judge by the many reprints of it that appeared, it was to prove one of his most popular works. The work was dedicated to Pope Gregory XIII and in the celebrated preface to it Palestrina excoriates ‘the love songs of men dominated by passion’ and says that he blushes and grieves to think that he was once one of their number, adding that though he could not change the past and undo what had been done, he had mended his ways. This, however, did not prevent him publishing a second book of madrigals a couple of years later.