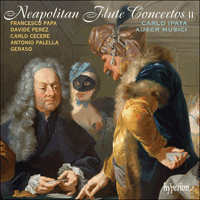 A second volume of flute concertos from eighteenth-century Naples from period band Auser Musici. Their first album of this repertoire was particularly praised for the impeccably stylish playing of flautist Carlo Ipata, and for the discovery of the music itself, which despite its obscurity is delightfully appealing.

The works are placed in their historical context in the booklet note by Stefano Aresi, who writes: ‘To listen to the flute concertos of these composers is to be transported to the atmosphere of everyday music-making in Naples, that of the private concerts in the aristocratic palaces. They give a good idea of the extremely high average quality of the compositions habitually consumed by the cream of Neapolitan society, perfectly representing the taste of an era and the outstanding virtuosity of the performers who were regularly employed there’.

The myth of musical Naples that was already widespread in the eighteenth century, and was subsequently embodied in the nineteenth in the mistaken historico-aesthetic category of the so-called ‘Neapolitan School’, has its roots in the city’s objective reputation at the time as the capital of European music. That reputation was connected, first and foremost, with the very large number of composers born or trained in Naples who were active throughout the continent, especially from the second phase of the War of the Spanish Succession, which lasted from 1707 to 1711 (the conflict ended in 1714). The musicologist Melania Bucciarelli has described this phenomenon, calling it quite literally a ‘diaspora’ of Neapolitan composers caused by the new possibilities of emigration and contact with patrons that the war had opened up, and the presence within the city of excess musical manpower at the highest level.

The fame of Naples as the cradle of music was reinforced by the extensive circulation of singers and scores (above all of vocal music, and most especially cantatas and operatic arias). And, finally, the reality with which any traveller came into contact on visiting the beautiful Gulf had something extraordinary about it: by the mid-eighteenth century, Naples had become an obligatory stopover for foreigners on their Grand Tour, not only for the sake of the continuing discoveries at Pompeii and Paestum or the stunning scenery, but also because in every street, every church, every palazzo, every theatre, on every public occasion, music of high quality accompanied and punctuated the life of the inhabitants.

Even today, such names as Porpora, Vinci, Leo, Pergolesi and Jommelli, the Neapolitan composers who were the spokesmen for a major revolution in taste that determined to a considerable extent the development of galant music, remain well known. But much less familiar to modern listeners are figures such as Perez, Geraso and Palella, all of whom, while boasting a thoroughly respectable career, were chiefly employed within the Kingdom of Naples itself, and actively contributed to animating the soundscape of the city.

To listen to the flute concertos of these composers is to be transported to the atmosphere of everyday music-making in Naples, that of the private concerts (accademie) in the aristocratic palaces. They give a good idea of the extremely high average quality of the compositions habitually consumed by the cream of Neapolitan society, perfectly representing the taste of an era and the outstanding virtuosity of the performers who were regularly employed there.

Davide Perez (1711–1778), a year younger than the more famous Pergolesi, is one of the most significant representatives of the generation of composers active in Naples after the internationalization of the innovations introduced by Vinci and Porpora. The theatrical impresario Angelo Carasale bracketed Perez and Pergolesi together as ‘two fine virtuosi of this city’, although it must be acknowledged that Perez enjoyed the greater immediate success: at a very early age he gained admittance to important circles of patronage in both Naples and Palermo, and he made his debut as an opera composer at the royal palace, in 1735, on the occasion of the celebrations of King Charles’s birthday. Pergolesi died the following year and at once became a legend (thanks largely to his published cantatas, the Stabat mater, and the extraordinary fortune of his intermezzo La serva padrona), while Perez, although pursuing a prosperous career that eventually saw him appointed as court composer in Portugal, was soon forgotten after his death. His Flute Concerto in G major clearly shows him as belonging to the same aesthetic and historical environment as Pergolesi, especially in the nature of the thematic material. Reference to vocal repertory, particularly of the kind performed by singers of the generation of Farinelli and Caffarelli, cannot be ignored here and is sometimes extremely obvious; this applies notably to the second movement, where fairly characteristic and significant vocal figures generally used in the passagework of arias intersect with the typically instrumental figures established by the contemporary Neapolitan schools of violin and cello playing.

Antonio Palella (1692–1761), by contrast, belongs to the generation of composers immediately preceding that of Perez and Pergolesi: a contemporary of Johann Adolf Hasse, he often took on the task of adapting the latter’s opere serie for the Neapolitan stage. Palella never moved away from Naples, but succeeded in exercising his profession in surroundings of considerable prestige (he was second harpsichordist at the Teatro San Carlo, for example) while acting as private music master to the offspring of a number of high-ranking aristocratic families and composing comic operas. The Concerto in G major recorded here is found attributed not only to Palella but also to Hasse. This is hardly surprising, since the problem of multiple attribution is a frequent one in the case of works associated with more or less well-known composers of the eighteenth century; in similar fashion, the Concerto in D major by Francesco Papa presented on this recording derives from manuscripts attributed to the virtually unknown Geraso. In the latter case, the question of authorship can be resolved on the basis of palaeographic rather than stylistic evidence, given the sketchy state of our current knowledge of the more personal elements in the compositional idioms of Papa and Geraso. However, in the case of Palella’s concerto there seem to be few distinctive signs that might prompt one to assign the work to Hasse, which therefore lends greater credibility, at present, to an attribution to the Neapolitan composer, even though the latter was clearly very well acquainted with his Saxon colleague’s style. In any case, it must be pointed out that the concerto displays the classic brilliant style that imbued the imagination of the whole generation of composers to which both men belonged.

Carlo Cecere (1706–1761), like Palella, never left Naples, composed chiefly opere buffe, and distinguished himself as a performer (not a harpsichordist but a violinist). The composer of a good many concertos, including a fair number for one or two flutes, Cecere possessed an instrumental style characterized by great melodic facility and supported by marked compliance in formal terms with the most successful contemporary models. His Flute Concerto in G major is an excellent illustration of how, thanks to his modular approach to melodic development over a harmonic texture that never ventures into complexity, Cecere was capable of conducting a linear and delicately emotional musical discourse with the technical skills and the imagination required to satisfy his customers.

We know little or nothing of Francesco Papa, whose artistic career must have been at its height in the 1740s. To judge from his Concerto in D major his style presents a series of interesting parallels with the works of figures such as Domenico Auletta and Niccolò Fiorenza in his later period. However, its complete adherence to the aesthetic norms widely shared by Neapolitan composers of the period makes it difficult to formulate any hypothesis as to what his sphere of action may have been.

Rather more characteristic, by contrast, is the attitude maintained by Geraso in his Concerto in G major. We do not even know this composer’s full name (all the manuscripts containing works of his are ascribed merely to ‘Sig.r Geraso’), and no data are currently available to allow us to give his works any more precise context than the Neapolitan sphere of influence in the 1720s and 1730s. However, his flute writing seems to be extremely idiomatic, as well as in many cases displaying an almost brazen virtuosity, although this is always carefully rationed and skilfully calculated to obtain expressive or audience-pleasing effects. The theatrical second movement of this concerto is particularly noteworthy. Here the vocal model reigns as absolute master over the solo line, and there is no lack of piquant harmonic resolutions; but this movement embodies above all the supreme balance between elegance and emotion that was the fundamental aesthetic principle animating whole generations of Neapolitan composers. These men, whether standing out as major figures in the history of music or condemned to remain in the archives after short-lived success, were able to draw daily nourishment from an original common language which soon became the symbol and the memory of an entire city, its life and its culture.