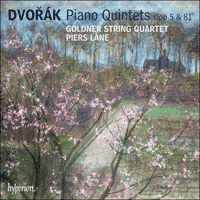 The performing team of Piers Lane and the Goldner String Quartet has won many plaudits for their enlightening interpretations of the obscurer piano quintet repertoire. Now they turn to a composer who triumphed in the genre. Dvořák’s two piano quintets were written at different stages of the composer’s career: the first during a period of poverty and uncertainty, the second when the composer was approaching the zenith of his international fame.

The two quintets make a fascinating pairing here. Dvořák originally tore up his manuscript of the first; luckily the pianist at the premiere kept a copy. It is clearly a youthful work, showing something of the discursiveness of the early string quartets, a point noted by a critic at the premiere, but there is no doubting the confidence with which Dvořák handles the combination of piano and strings (doubly impressive since he did not possess a piano at this time), which in many places anticipates the instrumentation in the famous second piano quintet.

Dvořák’s second Piano Quintet was an immediate popular success at its first performance and has remained one of the best-loved examples of the genre. The premiere was given by four of the finest Czech string players of the day and the promising conductor and composer Karel Kovarovic at the piano. The celebrated ‘Dumka’ movement, the lyrical heart of the work, demonstrates the extraordinary command of melody that characterizes the composer’s symphonies.

Performances of technical polish and expressive power, sensitively recorded, combine to make this a chamber disc to treasure.

‘Ideal balance and intimacy in a beautifully recorded coupling’ (Gramophone)
‘The performers offer an immensely satisfying and unmannered performance’ (BBC Music Magazine)
‘This is music to cheer the heart and put a spring in your step’ (The Daily Telegraph)
‘Interpretations which are characterised by much heartiness. I admire the ensemble's rumbustious inclinations in the brisker movements of both quintets, as well as the feeling of space they are able to create in the more songlike phrases … I happily recommend the recording … it is undoubtedly a strong contender for those wishing to expand their Dvořák collection’ (International Record Review)
‘Performed with splendid conviction by Piers Lane and his fellow Australians the Goldner Quartet’ (The Sunday Times)
‘These players' polished, expansive account of Op 81 is bursting with dramatic incident, fiery exuberance, expressive subtlety and meticulous dynamic control’ (The Strad)

The biggest splash in Dvořák’s early composing career came on 9 March 1873 with the spectacularly successful premiere in Prague of his patriotic cantata The Heirs of the White Mountain. He had, however, been emerging gradually from the shadows as a composer through the early 1870s. During the 1860s when Dvořák was in his twenties, only close friends, such as his good friend and fellow composer, Karel Bendl, were aware that he harboured ambitions to compose. In many ways, Dvořák’s creative aspirations at this time were atypical of his Czech contemporaries; where others focused on opera and symphonic poems, Dvořák wrote two large-scale symphonies and the song-cycle Cypresses, comprising eighteen numbers, in the space of about eight months in 1865.

These were years of considerable poverty for Dvořák and he eked out a living by playing the viola in the Czech theatre in Prague and teaching music. The musical characteristics of this early phase were, to say the least, pioneering, and later in the 1860s he began writing some highly experimental string quartets climaxing in the single-movement E minor quartet (B19) completed around 1870. This extraordinary work pushes tonal and formal experiment to limits unmatched by European composers until the mid-1890s. While bold in intention, there is no doubt that these works would not have found a ready public in the Prague of the early 1870s. The search for a sympathetic audience, as Dvořák began to make his way more publicly as a composer, clearly prompted a need to mould output to expectation.

The first signs that Dvořák was moderating his style are to be found in a series of song-settings from 1871 and 1872. Apart from The Heirs of the White Mountain and the comic opera The King and the Charcoal Burner of 1871, most of Dvořák’s composing efforts were geared to smaller-scale works suitable for the salons of Prague, in particular that of Ludevit Procházka, an enthusiastic amateur pianist who took part in the performance of at least one movement from the composer’s first two piano trios (both now lost). From the same vintage was his Piano Quintet No 1 in A major, composed in the late summer of 1872. This work might also have been lost to posterity since it seems Dvořák tore up and burnt his own manuscript of the quintet. However, Procházka had taken the precaution of having a copy made and so the work survived the composer’s overly impetuous judgement of it.

The quintet shows something of the discursiveness of the early string quartets, a point noted by a critic at the premiere, but there is no doubting the confidence with which Dvořák handles the combination of piano and strings (doubly impressive since he did not possess a piano at this time), which in many places anticipates the instrumentation in the more famous second piano quintet. Unsurprisingly, at this early stage in his career, there are influences to be perceived: Liszt in the first theme, which supplies much of the developmental impetus for the movement, and perhaps Schubert in the second main melody. But overall there is a clarity to the musical argument which was much enhanced by revisions Dvořák made in 1887, including a cut of some 150 bars; if Dvořák’s later decision to leave out the second theme in the recapitulation means the end of the movement comes a touch abruptly, he nevertheless provides a suitably heroic peroration.

The intense and impressively sustained Andante sostenuto is based on a main melody of Beethovenian nobility. After a restless central section the movement comes to a magically tranquil close. In sharp contrast the finale begins in agitated fashion with a bold introduction which draws the tonality from the distant F major of the slow movement to A major, the main key of the whole quintet. There is something of the quality of a scherzo about the manner of writing, and while there is much detail for the ear to fasten onto in this wide-ranging movement, the cumulative effect of the whole does not compare with the later quintet or, indeed, the chamber works he was to write in the mid-1870s.

In one of his periodic reviews of earlier works, Dvořák’s mind returned to his first piano quintet and he asked Procházka for his copy of the piece. Notwithstanding making cuts in all three movements, Dvořák still did not feel able to offer it to Simrock, his Berlin publisher, for publication (in fact, the premiere of his revised version did not take place until 1922, eighteen years after Dvořák’s death). But as was often the case with Dvořák, the contemplation of one work led to the composition of another in the same form. He appears to have wrestled with the earlier quintet for as much as five months before concluding that it was unviable. His frustrated efforts, however, seem to have unleashed new creative energies and the new quintet was completed in a little over six weeks, from the middle of August to the beginning of October 1887.

While the first quintet was composed in a period of considerable uncertainty for the young composer, the Piano Quintet No 2 in A major was written as he approached the zenith of his international fame. It was also composed in the congenial surroundings of Dvořák’s country retreat, Vysoka. The premiere was given on 8 January 1888 at a concert in the Rudolfinum in Prague with four of the finest Czech string players of the day and the promising conductor and composer Karel Kovarovic at the piano. Publication by an enthusiastic Simrock followed—chamber music was a far more lucrative prospect for the publisher than symphonies—and the quintet began to make its triumphant way in the world. The only jarring note in its progress was one of Dvořák’s periodic tussles with Simrock over the issuing of his music with titles in Czech as well as German. Dvořák eventually had his way, but only by dint of sending the erring publisher a specimen title-page in both languages.

The clarity of design and open-hearted expression which are the most winning features of the quintet—and indeed of most of the works by Dvořák from the 1880s—are but two of the virtues of which this work is by common consent a compendium. Dvořák’s success in matching the richness and volatility of his melodic gifts with an unerring grasp of classical form is remarkable: neither structure nor instrumentation seem to have posed any of the problems apparent in the earlier quintet.

The leisurely opening of the first movement, the cello over a rocking accompaniment by the piano, belies the vigorous activity that occupies much of the movement. The latter tendency becomes apparent with the entry of the upper strings. These contrasts of mood, which are such an appealing feature of this movement, are effected mainly by deft changes in harmonic rhythm. In the substantial development Dvořák makes use of all his themes, but gives pride of place to the opening melody which he subjects to characteristically subtle alterations. The richly textured recapitulation, in which the first violin now takes the main theme, is set off by a superbly expansive introduction.

The slow movement, entitled Dumka, alternating slow and faster sections and a favourite form of the composer, is the lyrical heart of the work. In fact, the contrast between the two main melodies is not particularly marked, with the sensuous melody of the ‘fast’ section (Un pochettino più mosso) ambling along at a barely faster tempo than the soulful opening theme (Andante con moto). Greater contrast is to be found in the central section, marked Vivace, which takes the opening melody of the movement and develops it in order to create a thrilling climax; very much the ‘wild dance’ which Dvořák himself later spoke of when describing his conception of the Dumka.

The brilliant Scherzo has characteristics of both a fast waltz and the Furiant—Dvořák’s favoured style for many of his scherzo movements in the 1880s—whose bold cross-rhythms dominate the opening melody. A more relaxed secondary idea led by the cello is based on a genial transformation of the opening melody of the quintet’s first movement. The trio comprises a gentle sequence of chords adorned by and interspersed with dreamy references to the main melody of the Scherzo. Deceptively simple, this central section reaches heights of eloquence as the two violins play its main theme against a gently rocking accompaniment from the piano.

In the superbly sustained finale, Dvořák maintains momentum by leaving his themes open-ended: each one leads on to the next with compelling inevitability. Nothing is wasted and even the jaunty little vamp that opens the movement is used to fine developmental effect. Perhaps with the example of Schumann’s Piano Quintet in mind, Dvořák embarks on a vigorous passage of fugal counterpoint which overlaps with the recapitulation. After the cheerful bustle of the main part of the movement, Dvořák calms the headlong pace of the music with a magical series of chords. After this momentary repose the pace gradually increases and the quintet concludes with brilliant pentatonic flourishes distinctly prophetic of Dvořák’s ‘American’ manner.