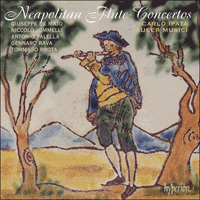 Cover artwork: A revisitation of the eighteenth century by Giacomo Alessi (b1959)
Ceramic plate, after a painting (1740) by Nicolas Lancret (1690-1743), Caltagirone, Sicily / Photo by Fabio Muzzi

Auser Musici’s recordings for Hyperion have been praised for their stylish period-instrument charm and lithe, flexible, elegant sound. They have rediscovered many hidden gems of the Italian baroque repertoire. Works featuring the flute are something of a speciality of the ensemble and their disc of Boccherini Flute Quintets was highly acclaimed. The baroque flute virtuoso Carlo Ipata returns for this latest release.

Previously concentrating on music of Tuscan origin, Auser Musici now turns to 18th century Naples. The city at this period was an extraordinarily fecund artistic crucible, with many commissioning opportunities for young composers.

The composers recorded here are contemporaries of the great composers such as Porpora who were at the forefront of the achievements of Neapolitan music in the first half of the eighteenth century; and the startling quality of the music demonstrates the richness of the artistic life of the age.

‘The performances are a delight. What with Carlo Ipata's liquid tone and secure virtuosity, and the brightness, nimbleness and transparency of the one-to-a-part strings of Auser Musici (excellently captured by the recording), this unassuming but sunny and attractive music has surely achieved its finest hour’ (Gramophone)
‘Ipata's playing is impeccable in both technique and style … many a period-instrument musician could learn from studying this example. The members of Auser Musici, on this occasion a tiny string band, play their period instruments with Mediterranean sparkle and wit, with some occasional delightful flourishes for solo violin and cello. What a lovely disc this is’ (International Record Review)

The Naples in which the composers of the music assembled on this CD studied and worked was a centre in powerful ferment from every point of view: driven by a series of far-reaching political upheavals, it was experiencing unprecedented socio-political, urban, cultural, and economic growth. In 1735 it had also become once more the capital of an independent state ruled by Charles of Bourbon, during whose reign it underwent a phenomenal expansion that turned it into the most populous city on the Italian peninsula. Despite the damage inflicted by four great famines (in the years 1709, 1714, 1735–6, and 1764–6), the average trend of the state economy rose substantially over the course of the eighteenth century. If the seventeenth-century city had produced cultural artefacts of exceptional importance, its eighteenth-century successor was in a position to become an acknowledged centre of what might be termed a new Renaissance, though one which by no means claimed to emerge from some supposed Dark Age, but rather from the chaos of an immense creative forge which had helped to form the spirit of experimentation and the solid technical foundations on which the musicians, painters, architects, decorators, writers and thinkers of the ‘Age of Enlightenment’ built.

The royal palace of Caserta, the Sansevero Chapel, the cribs of Sanmartino and the porcelain factory of Capodimonte are still today, even for the least prepared tourist, tangible signs of an urban life possessed by a wonderfully hedonistic artistic impulse. The life of Naples was nurtured on the poetry of Metastasio and the philosophy of Vico and Giannone, and offered the visual models that determined the success of painters such as Traversi. And, above all, it embodied the cradle, the testing-ground and the hallmark of a long line of extraordinary musicians whose achievements would go to create the myth of the so-called ‘Neapolitan School’.

The success of the musical works conceived during this period is due first of all to the excellence so frequently attained in the output of the principal composers and performers native to the city, as well as to their extraordinary force of innovation. However, we should bear in mind the extent to which the material expansion of Neapolitan culture was made possible by a constant ‘brain drain’, related both to the benefits deriving from the political changes of the first half of the century (which at the same time guaranteed links with the Habsburg Empire and with Spain) and to the flight of an overabundant artistic population from the urban centre. An endemic feature here was the risk of unemployment of the lower classes, who experienced an everyday reality characterized, in varying degrees, by a legal system whose private fiefdoms made it totally impermeable, widespread superstition, an overwhelming bureaucracy, a sometimes exacerbated professional corporatism, and above all a disconcerting level of poverty, permanent in the countryside and increasingly apparent in the peripheral districts of the metropolis. However, on the fine streets of Naples, paved with black stone, alongside beggars crushed by a system of distribution of property and rights that was unjust even by the standards of eighteenth-century Italy, there moved a far from negligible host of nobles, ecclesiastics belonging to great institutions (some of them charitable in purpose), and members of the haute bourgeoisie: in short, a client base with a ravenous appetite for artistic and musical novelties. A gifted young composer could only be thrilled by such a state of affairs and try to introduce himself into the processes which might guarantee him ever more prestigious commissions.

Tommaso Prota (?1727–after 1768), Antonio Palella (1692–1761), and Giuseppe de Majo (1697–1771) are contemporaries of the great composers who were at the forefront of the achievements of Neapolitan music in the first half of the eighteenth century, namely Porpora, Leo and Vinci (Jommelli and Hasse deserve separate discussion). All three of these lesser-known composers received their professional training at one of the four conservatories of Naples (Palella at Sant’Onofrio, Prota at Loreto, de Majo at the Conservatorio dei Turchini); all three made their debuts in the city; all three made a significant (though not revolutionary) contribution to the splendid musical scene that flourished on the slopes of Vesuvius; and, finally, all three refer in their works to styles, forms and tastes promoted by the most innovative composers of their generation.

Prota was a member of a large family of musicians embedded at various levels in the local institutions (he was the son of Ignazio, described in more than one source as an ‘excellent composer, and most excellent teacher’). Like many of his colleagues, the young Tommaso left Naples to seek employment appropriate to his standard of education and his skills in self-promotion: he certainly went to Malta, and may also have worked in London and Paris. The extant documents suggest that he did not live very long, and his known output is indeed small: the highly elegant and well constructed concerto recorded here, three opere buffe (lost), a Salve Regina, a vesper service, a somewhat mediocre oratorio, a Prologo, a cantata, and some other instrumental music (outstanding among which are a concerto and sonata for mandolin and six sonatas for two flutes and continuo). In short, a musician of quality who left his native shores to seek fortune and employment: a common enough destiny, as we have said, but diametrically opposed to the career path, equally common, which was marked out for composers like de Majo.

Giuseppe de Majo worked principally within the city. He showed considerable skill in attaching himself to one of the largest local musical institutions, the court cappella, where we find him from May 1736 (as supernumerary organist). He managed to climb to the highest rungs of the institutional ladder, whether thanks to his acknowledged artistic gifts (in August 1737 he became pro-vicemaestro, and in 1744 vicemaestro) or by virtue of the not entirely legitimate ‘pressure’ applied in his favour by Queen Amalia. On the death of Leonardo Leo, a commission was appointed to choose by public examination his successor as director of the cappella: although he was competing against names of the highest stature, such as Porpora, Francesco Feo and Francesco Durante, and was supported only by Hasse among the four members of the jury, on 9 September 1745 de Majo was declared the winner against all predictions and all proprieties of procedure. It is entirely possible, given his long-term employment with the cappella, that the flute concerto recorded here was written for the Neapolitan court.

Antonio Palella, too, achieved distinction on the city’s musical scene and built up an excellent network of contacts; he was active mostly as an adaptor of other men’s drammi per musica, and performed at the Teatro San Carlo as second harpsichordist from the day of its inauguration (11 October 1737). Palella’s surviving works are not of outstanding artistic quality, but are of considerable importance for the development of the nascent opera buffa. His style (featuring symmetrical periodization of phrasing, a marked sense of the dominant– tonic relationship, an intensification of ornamental and harmonic detail, and great melodic facility) ideally embodies the characteristics of the composers already discussed, as well as that of such virtually unknown musicians as Gennaro Rava, the oboist of the Teatro San Carlo in the 1770s who taught the oboe and the flute at the Conservatorio della Pietà dei Turchini. Rava was probably the only one of the composers featured on this recording with a thorough knowledge of the possibilities of an idiomatic style made to measure for the transverse flute, doubtless because he was either a flautist himself or in close contact with a professional performer on the instrument.

In point of fact, if one examines the flute concertos assembled on this disc, it is evident that though they are eminently representative of the taste and compositional styles of their period, they do not suggest the existence of a Neapolitan ‘flute school’ with its own independent features, unlike contemporary vocal works and music for string instruments (especially the cello). Moreover, there is no record of flautists of Neapolitan origin and training who were acknowledged as innovative or particularly superior to their colleagues on the international scene, and the output of solo wind concertos seems fairly small (the extremely fine concerto of Jommelli—one of the two composed by that great artist—was in all probability conceived far from the city).

Nevertheless, the nature of this music not only confirms a high standard of quality in the work of these composers and in the overall instrumental output of the city, but also suggests that the wind players who performed it must have possessed exceptional capabilities: when one reads the scores there can be no doubt of the degree of skill required to confront the virtuoso demands. The professional careers and the output of Palella, Rava, de Majo and Prota have been forgotten, either because they have been buried in the archives or on account of the personal vicissitudes of these composers; yet they come close to the quality of a star of international stature such as Jommelli who has always been recognized, studied, and highly esteemed. This should serve to remind us that even a composer described by numerous commentators as a ‘genius’ could not have existed without a cultural substratum of an extremely high artistic standard from which he could emerge.

Music at Naples, in the first half of the eighteenth century, was seething with creative fire in all its aspects, ready to explode like Vesuvius as it is depicted in the paintings of the period: spectacularly and constantly sparkling with a glow that can illuminate the darkness of a society which certainly had its obscure sides, yet which encouraged a splendour rare in the history of the arts.

Cover artwork: A revisitation of the eighteenth century by Giacomo Alessi (b1959)
Ceramic plate, after a painting (1740) by Nicolas Lancret (1690-1743), Caltagirone, Sicily / Photo by Fabio Muzzi