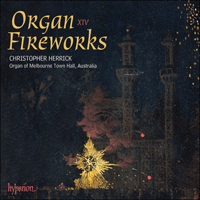 This fourteenth volume of Christopher Herrick’s monumental Organ Fireworks series comes from the organ of Melbourne Town Hall. As ever, Herrick presents a cornucopia of virtuoso delights, opening with a bang with Lemare’s outrageous transcription of the Grand March from Aida, given a new sheen by Herrick himself. Other works include pieces by living composers Iain Farrington and Paul Spicer, and examples of the best of the English and French traditions of 19th- and 20th-century organ writing.

‘A source of perpetual admiration in this endlessly rewarding series is the sheer amount of repertoire Christopher Herrick gets through … some wonderfully entertaining highlights, some memorably revisited classics … superb playing of a truly enticing programme, a richly magnificent instrument and a top-notch recording; what more could you want?’ (Gramophone)

Giuseppe Verdi (1813–1901) was writing traditional grand opera at a time when his exact contemporary Richard Wagner was going down the radically different paths that led him to ‘music drama’, a conception of opera in which all its elements are fused into a seamless, integrated whole. Aida, whose first performance took place in Cairo in 1871, post-dates by some twelve years the completion of Tristan und Isolde. Its Grand March, heard here as arranged by Edwin Lemare and Christopher Herrick, is taken from Act II Scene 2, which is the stunning centrepiece of what must surely be one of the grandest of all Grand Operas. On-stage trumpets mark the return of Radames, the commander of the Egyptian army, triumphant after achieving victory over the Ethiopians, and the spectacle at this point includes both the victorious army and its captives. The march’s central section is based on one of the most famous of Verdian melodies: heard at first in A flat, Grandioso, its elevation to B major leads to the reprise and a splendid coda.

The distinguished choral conductor Paul Spicer (b1952) is perhaps best known for his work with the Finzi Singers and the Birmingham Bach Choir, but he enjoys a growing reputation both as a composer and as a writer. His Fanfares and Dances, written in 2004, is dedicated to Nigel Potts and Liese Leyrer and was played at their wedding, which took place at St Peter’s-by-the-Sea Episcopal Church, Bay Shore, New York in October that year. Marked ‘lively and celebratory’ and characterized by colourful harmony, it alternates majestic passages in 4/4 time and dance-like ones in which the tuba stop enjoys irregular metres.

A native of Liège, Belgium, César Franck (1822–1890) settled in Paris and became Professor of Organ at the Conservatoire and organist of the basilica of Ste-Clotilde, where he played (and was greatly inspired by) an organ by Cavaillé-Coll. His Trois pièces pour grand orgue, which conclude with Pièce héroïque, were written for the opening of the Trocadéro, Paris, a Moorish palace built for the World Exhibition of 1878 on the site now occupied by the Palais de Chaillot. The dark-hued, finely wrought main theme of Pièce héroïque, heard beneath a restless chordal accompaniment, is followed by a confident, on-the-beat pendant. Introduced by timpani-like notes, the tranquil middle section has a delicately scored chorale-like theme in B major. The timpani become increasingly insistent, and the re-introduction of the main theme and a swaggering reprise of its pendant lead to a major-key coda in which the ‘chorale’ is heard on the scorching tones of the full organ.

Iain Farrington (b1977) was organ scholar at St John’s College, Cambridge and is among the foremost composer-performers of his generation. His Animal Parade, which was commissioned by and dedicated to William Whitehead, was first heard in 2007, when the dedicatee performed it at St Lawrence Jewry, London. It comprises twelve movements of which Nos 2 to 11 are depictions of animals (including critics!). In Penguins, the eighth movement, shivering sextuplets, slithering glissandi and an ‘oompah’ accompaniment brilliantly convey the animal’s curious gait. Giraffes, the second movement, is in essence an A flat major Andante, its sinuous, wide-ranging phrases suggesting the creature’s peculiar grace. Barrel Organ Monkey, the third movement, deftly evokes not only the tiny dancer’s jerky steps but also the engaging vulgarity of the instrument accompanying him.

Marcel Lanquetuit (1894–1985) was born in Rouen, and after studying there with Albert Dupré, and later with Dupré’s son Marcel, he entered the Paris Conservatoire and worked with Gigout. He eventually returned to Rouen and became organist of the cathedral, a post he held until his death. His Toccata in D major, which dates from 1927, is dedicated to the elder Dupré, but its staccato repeated chords seem like a nod in the direction of the final pages of the younger Dupré’s Variations sur un Noël, which appeared some four years earlier. This is not a derivative work, though, and the incessant chords—and the memorable sustained melody which emerges from them—create an exhilarating toccata quite unlike any other.

Alfred Hollins (1865–1942) was born in Hull, Yorkshire, and in spite of blindness enjoyed a career which included organ recitals in America, Australia and South Africa, composing for the instrument, acting as an organ consultant, and playing for many years at West St George’s Church, Edinburgh. His compositions—for the most part one-movement works with fanciful titles—belong to the secular tradition of organ-writing spawned by the advent of the British concert organ. His Triumphal March, the other ‘grand march’ in this programme, is a fine example of Hollins’s easy mastery, and although it has all the panache of Elgar’s great marches, it says much for Hollins that it nowhere sounds even remotely like the work of his famous contemporary.

Samuel Sebastian Wesley (1810–1876), the outstanding church musician of Victorian England, was successively organist at the cathedrals of Hereford, Exeter, Winchester and Gloucester, and he spent seven years at Leeds Parish Church between the second and third of these appointments. Choral Song and Fugue, written at Exeter, is the third of his first set of Three Pieces for Chamber Organ, both sets having been written for the organ at Killerton House, Broadclyst, Exeter, the home of Wesley’s pupil Lady Acland, to whom they are dedicated. It comprises a cheerful, tuneful first movement followed by a fugue in which all textbook notions of this daunting form are quickly swept aside: its headlong progress is eventually checked by the arrival of the remote key of C sharp major, and at this point Wesley engineers a return to the home key of C major which has an almost Beethovenian audacity.

Dudley Buck (1839–1909) was born at Hartford, Connecticut and studied both at the Leipzig Conservatoire and in Paris. On returning to America he held a number of posts as organist and composed in a variety of genres. His Variations on ‘Old Folks at Home’ begins with a brief introduction and then a statement of the theme marked Andante patetico. The animated first variation runs straight into the second, a very quiet Poco adagio. The third begins as a majestic pedal solo calling for a pedal technique sufficient to play two-part harmony. In the final variation, the theme is heard in the tenor register below a lively descant, but the quiet coda dismisses these remembrances of youth, its chromaticism recalling the resigned mood of the theme’s initial statement.

Like Franck, Alexandre Guilmant (1837–1911) was a Parisian organist: he succeeded Widor as Professor of Organ at the Conservatoire, presided at Ste-Trinité from 1871 to 1901, and was ‘Organiste honoraire’ at Notre Dame from 1902; and as well as composing prolifically for the organ, he was a widely travelled recitalist, and a musicologist who did much for French music of earlier centuries. His Sonata in D minor Op 42, the first of eight such works, dates from 1874. The dotted rhythms of its Introduction seem like a homage to the French operatic overtures of the Baroque, but what follows is not a fugue but a spirited sonata-form movement with a splendidly athletic first group and a sustained second one marked at its first appearance espressivo. The lovely Pastorale, in A major, is in A–B–A form, its middle section dominated by the ‘chorale’ of the voix humaine, its outer ones by the engaging tones of the oboe and clarinet. The brilliant finale, like the first movement’s Allegro, has a sustained second group whose material dominates the splendid coda. Here the minor-key tensions of the sonata’s dark and turbulent introduction are magnificently resolved in the key of D major.

Melbourne Town Hall Grand Organ
The original organ in Melbourne’s new Town Hall was built by William Hill & Son of London. The parts, packed in a great number of cases, arrived in Melbourne in 1871 after a fifty-six-day journey from London, a year after the Hall was built. It had four manuals and sixty-six speaking stops.

In 1906 Ingram & Co carried out a complete reconstruction of the organ on the electro-pneumatic principle, including a new console. A number of new stops were added along with repairs to the wind trunks and sound boards. Edwin Lemare gave the opening recital.

In late 1925, following the Town Hall fire that destroyed the organ and a large part of the Main Hall, the Council decided to rebuild the Hall and install a new Grand Organ. The tender of William Hill & Son and Norman & Beard Ltd of London was accepted. The opening recital was given by W G Price, the City Organist, in 1929. This large organ gradually fell into disrepair and by 1997 it was unplayable.

The Schantz Organ Company of Orville, Ohio, USA, have restored and enhanced the organ at a cost of $4.5 million over a five-year period, culminating in a grand opening concert in 2001. Schantz, who have a staff of seventy, are the oldest and largest American pipe organ builder still under the management of the founding family. The organ parts were shipped to the USA, all except for the largest pipes which were worked on by local Australian organ builders. Many new pipe ranks were added and a corridor was included in the internal layout to give access for regular tours by the general public.