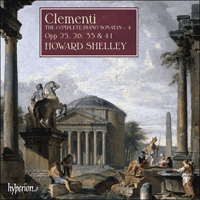 Howard Shelley’s splendid series of Clementi’s complete piano sonatas continues with a fourth volume containing some of the composer’s most important works. The ten sonatas of Opp 25, 26, and 33 that Shelley performs in this recording are all products of a period in Clementi’s life when he was the darling of the London music scene, acclaimed by contemporaries in the most effusive language: ‘But the performance beyond all others to astonish, was Clementi’s concerto on the Piano Forte: what brilliancy of finger, and wonderful execution! The powers of the instrument were never called forth with superior skill, perhaps not equal’.

As well as the elements of virtuosity described above, the works recorded here—particularly the fourth and fifth of the Opp 25 sonatas—contain a high degree of compositional originality and forward-looking piano writing. The A major sonata (No 4) has a curiously nineteenth-century sound. The first movement, Maestoso e cantabile, displays a profusion of melodic ornament reminiscent of Chopin. The fifth, perhaps Clementi’s greatest sonata, was much championed by Horowitz, among others.

‘Shelley, who adds to unfailing textural clarity, sensitivity of phrasing and fine touch a willingness to seek out what is meaningful in this music and realise it to a degree that might have surprised even its composer’ (Gramophone)
‘Beautifully flexible playing … Shelley is a first-rate advocate, with passage-work of crystalline clarity, light-footed pedalling, and communicating a sense of deep commitment to this unjustly under-rated repertoire. The sound … could not be better. Unreservedly recommended’ (BBC Music Magazine)
‘There is huge variety and pianistic invention … Shelley brings energy, vitality and clarity to the sparse textures of a work [Op 25 No 5] which owes much to Scarlatti … stunning recording quality, exemplary programme notes by the leading authority on Clementi, two discs for the price of one and generous playing time on each, and piano playing of the first order from Howard Shelley’ (International Record Review)

Muzio Clementi (1752–1832) was born into a family of modest means in Rome. When he was fourteen years of age, a visiting Englishman returning from his ‘grand tour’, Sir Peter Beckford, cousin of the novelist William Beckford, took young Clementi with him back to his country estate in Dorset. (Beckford later explained that he had ‘bought him from his father for seven years’.) In this rather isolated place, just north of Blandford Forum, Clementi became a kind of one-person musical establishment. He performed for Beckford’s guests, began to compose, and spent long hours refining the keyboard technique that was one day to be legendary. When the seven years were up he moved to London, which was to be his home base essentially for the rest of his life. He presently became an accompanist at the King’s Theatre, began to publish his earliest keyboard music, and prepared for European tours that occupied most of the years 1780–85. In Paris he apparently played for Queen Marie Antoinette, and in Vienna he and Mozart engaged in a famous ‘piano contest’ staged by the Emperor Joseph II for the entertainment of his guests. Thereafter Clementi spent some months teaching in Lyon, where his attempted elopement with a piano student ended unhappily: the highly placed father put a stop to such an undesirable marriage and Clementi became something of an object lesson in the lowly status of musicians in respectable late eighteenth-century European society.

From 1785 to 1802 Clementi remained in London, participating in the most robust musical life of any city in the world. In 1791 the London Morning Chronicle exclaimed:

So many public Concerts, private Concerts, Operas, Balls, and Music Meetings, as are cut out for the Winter, and such a shoal of eminent performers as are imported from the Continent, will render a motto from Shakespeare’s Tempest highly appropriate to this country:

The Isle is full of noises,
Sounds and sweet airs, that give delight and hurt not.
Sometimes a thousand twangling instruments
Will hum about mine ears.

In the midst of this great crescendo of musical activity Clementi reached the apogee of his career, first as a performer, then as a composer. The only major obstacle to his burgeoning fame was one of that ‘shoal of eminent performers from the Continent’, Joseph Haydn, present in the city in 1791–2 and 1794–5; Londoners consistently preferred him to any local talent. And the comparison with Clementi was not hard to make, as the principal fare offered by both composers at London concerts consisted mainly of symphonies. (Only two of Clementi’s symphonies from this period, published in 1787 as Op 18, have survived.) Until 1790 Clementi also appeared frequently on the London stage as a piano soloist, performing his own sonatas and concertos. Here is a fairly typical review from the Morning Chronicle of 15 February 1790:

But the performance beyond all others to astonish, was Clementi’s concerto on the Piano Forte: what brilliancy of finger, and wonderful execution! The powers of the instrument were never called forth with superior skill, perhaps not equal.

The ten sonatas of Opp 25, 26, and 33 that Mr Shelley performs in this recording are all products of this heady time in Clementi’s life. The six sonatas of Op 25, published in 1790, are diverse in character. The second and sixth, in G and D major, are convincing pieces in an unmixed classical or—to use the contemporaneous term—‘galant’ idiom; their transparent textures, limited harmonic vocabulary, and rather conventional keyboard figurations have about them the ring of the familiar. These pieces are successful for the same reasons that some of Haydn’s more modest sonatas are (an example is the well-known one in D major, Hob XVI:37): they offer the quiet joys of tight construction and bright major tunes, with few harmonic or rhythmic surprises. Both final rondos in these sonatas, in particular, invite comparison with Haydn; their catchy main tunes with lots of internal repetition, as well as their minore episodes—rare in Clementi’s rondos until now—suggest that Clementi had been thinking about his rival before he set foot in England.

While both these sonatas and the ones of Haydn they resemble were probably composed mainly for publication and the enjoyment of amateur pianists, another pair of sonatas from this set, the first in C and the fourth in A major are virtuoso pieces that we can easily imagine Clementi playing in concert. The A major sonata has a curiously nineteenth-century sound. The first movement, Maestoso e cantabile, displays a profusion of melodic ornament that might remind us of Chopin, and in both movements there is wide-ranging passagework, sometimes for the left hand, that would likely discourage most amateur players. The following sonata, in F sharp minor, is again quite different. Minor keys often seem to call forth the best in Clementi, and this sonata is no exception. Particularly its outer two movements recall the previous sonata of his in a minor key, the memorable Op 13 No 6 in F minor (in volume 3 of the present series). Intense driving figurations in these movements, including runs of thirds in the finale, remind us of that earlier sonata. But for other traits of this composition Clementi seems to have reached further back into his past: the first movement alternates distinctive contrasting two-bar modules, of which the first poses a harmonic ambiguity that the second resolves—a device clearly reminiscent of the Scarlatti sonatas Clementi studied in his youth.

The single sonata of Opus 26, published in 1796, seems designed, again, to appeal to amateur pianists, if rather advanced ones. The first movement begins with a theme marked dolce, but whose emphatic double-dotted rhythms suggest something more like maestoso, creating thus a precarious balance with genuinely lyrical music to follow. Clementi still seems absorbed with dotted rhythms in the rondo that follows; but this time there is nothing offered by way of contrast: they persist even in the movement’s minore episode.

The Sonata Op 41 in E flat major has a somewhat convoluted history. When Clementi arrived in Vienna in the spring of 1804, he learned that a leading music publisher in the city, Artaria & Co., had just put out this sonata (together with assorted other pieces of his) without permission. This was embarrassing on more than one score: this composition was from a much earlier time in the composer’s life (he had likely left it behind after his last visit to Vienna in 1782), and, moreover, he had already borrowed some of its music for another sonata in E flat (Op 23 No 1). Clementi quickly arranged for a different Viennese publisher to print the corrective edition we hear in this recording, much revised, with the offending passage removed and a slow movement added. That slow movement is a fine one. The opening melody—with its distinctively long anacrusis figure, subjected to a series of ever-changing ornamental restatements—accounts for all the thematic material of the movement, and represents the more mature Clementi at his best. The first movement of this sonata, like the Sonata Op 23 No 1 for which it was cannibalized, once more looks like a revised concerto movement.

Symphonies and concertos were seldom published in England in the late eighteenth century, since, as one music publisher put it, they ‘would simply stay on the shelves’. Though we know that Clementi performed concertos at many London concerts during this period, not a single concerto of his was published during his lifetime. The single Clementi concerto we have survives in a Viennese copy in the hand of Johann Schenk, who was for a time a teacher of Beethoven. Clementi converted the concerto into a more saleable sonata, published in 1794 as Op 33 No 3 in C major. The sonata shows clear signs of its ancestry: there is a good bit of bravura passagework for both hands and one occasionally misses the harmonic support of the (absent) orchestra. And where certain orchestral interjections are written out for the piano, they tend to sound plain and four-square amidst their colourful soloistic surroundings.

The first sonata of Op 33, in A major—often a good key for Clementi—is a compact, lucid piece with a modest harmonic vocabulary and a transparent texture reminiscent, once again, of Haydn. The opening theme of the first movement begins with elegant Haydnesque rhythmic ambiguity as a three-beat anacrusis floats weightlessly downward to the start of bar 2—where an unstable harmony puts off a real downbeat until we finally get it in bar 3. (Clementi attempts something similar, perhaps with less success, in the finale of the following sonata in F.) Then comes a rondo, whimsical in the extreme, full of surprising harmonic digressions and abrupt changes of texture. The sonata ends with a flash of wit: an unceremonious, chromatic, sidling approach to the final tonic chord.