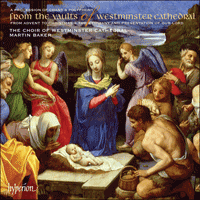 From the vaults of Westminster Cathedral

A century ago, Richard Runciman Terry re-introduced the wonders of the Renaissance into liturgical polyphony and placed Westminster Cathedral Choir at the pinnacle of the art. Terry was a musical pioneer whose work as Master of Music at Westminster Cathedral between 1902 and 1924 is legendary. The musical roadmap that Richard Terry charted for London’s new Roman Catholic cathedral remains largely unrevised today. Plainchant and Renaissance polyphony are the bedrock of Westminster Cathedral’s sung liturgy—early music is the root from which the cathedral’s musical endeavours have branched for over a century. Also, from Westminster Cathedral’s earliest years, alongside the fascination with early vocal repertory, composers have been commissioned to contribute to the canon; when they have done so the choir’s antique musical diet has frequently been at the forefront of those composers’ imagination.

This disc is a homage to Terry’s work: a procession through a particularly rich section of the church’s year which perfectly illustrates the changing glories of the liturgy.

‘Splendid singing illuminates these works from the vaults of Westminster … the Monteverdi Missa a 4 is especially virile and mellifluous … throughout, the choral singing under Martin Baker's direction glows resplendently, while still retaining its celebrated 'continental' edge. Another tremendous plus is the exhilarating, splashy, dynamic and fiery improvisations dished up by Matthew Martin on the Grand Organ … the recording is up to Hyperion's exemplary high standards’ (Gramophone)
‘The strikingly Byzantine Westminster Cathedral has stood for barely 100 years and yet its musical tradition is rooted several centuries before, in plainchant and renaissance polyphony, sung in spectacular style by its superb choir … impressive organ improvisations from Martin Baker complete a richly satisfying recording’ (The Observer)

This recording owes its existence to a ‘tiresome highbrow’, a ‘feather-brained crank’. R R Terry was a musical pioneer whose work as Master of Music at Westminster Cathedral between 1902 and 1924 is legendary. The musical roadmap that Richard Terry charted for London’s new Roman Catholic cathedral remains largely unrevised today. Plainchant and Renaissance polyphony are the bedrock of Westminster Cathedral’s sung liturgy—early music is the root from which the cathedral’s musical endeavours have branched for over a century. It is a delightful irony that one of England’s more modern cathedral foundations relies so heavily on music that had existed for hundreds of years before the first stone was laid. Terry was, indeed, a highbrow and a crank, but history has excised the invidious early twentieth-century adjectives and now regards him as fervent rather than tiresome and enlightened rather than feather-brained.

The procession of the liturgical year is, naturally, central to the worship at Westminster Cathedral. The church year begins on Advent Sunday, at which point graduals and antiphoners are shaken free of their post-Pentecostal bookmarks and the annual round begins anew: the music is solemn and expectant; and after the majesty of Christmas, the Epiphany liturgy is revelatory and regal. The musical depiction of any text is bound to be metaphorical rather than precise, so that solemnity, expectancy, majesty, revelation, and kingliness are in the ear of the musical creator as much as in the eye of the beholder. Does the Latin word ‘Rorate’ at the opening of this recording sprinkle or distil; or does it simply drop down? And if it drops down, why does the plainchant motif ascend? Byrd’s motif ascends too, but in a uniquely muscular fashion that is in stark contrast to the yearning appoggiatura of the plainsong. But the heavenly ‘caeli’ is set high in both cases—how uplifting. The gift of the interpreter is to portray the meaning of a given text according to the intentions of the composer. Compositional intention is notoriously difficult to ascertain, but it is enough to know that Advent clearly had a different flavour in Jacobean England than it did in medieval Europe. The fact that these differently hued musical creations can live alongside each other within a flourishing twenty-first-century liturgy is cause for celebration. That is the raison d’être of this anthology.

Victoria, Byrd, and Lassus are the towering figures of the late Renaissance—along with the iconic Palestrina. Palestrina was an opportunist, a man for whom composition represented status as well as artistic statement. To be exposed to the coherent musical language that Palestrina had formulated was one of the reasons that the young Victoria left his native Spain to study and work in Rome for the first half of his adult life. It is not clear whether Victoria was actually taught by Palestrina, but the two must have known each other since they lived and worked in very close proximity. If Palestrina had taught Victoria as a young man then Victoria’s first publication must have filled the older composer with pride. Although Victoria was only in his early twenties when the 1572 collection was published, these early motets (some of which could well have been composed in his late teenage years) show a composer with remarkable technical facility. The opening phrase of Descendit Angelus Domini, with its appropriately descending triad to paint the meaning of the first word, its forcefully monotonous second word to delineate the Angelic messenger, and its melismatic treatment of the dominant third word, is a model of High Renaissance musical method. Thereafter Victoria uses his youthful enthusiasm to drive the meaning of each phrase home, most memorably when he halts the contrapuntal flow in order to state the name of John the Baptist in bold homophony. Byrd’s sacred music is no less aurally arresting than that of Victoria, and the Advent propers (the motets that Byrd composed to accompany the Votive Mass of the Blessed Virgin Mary in Advent) contain some of Byrd’s most assertive music. Rorate caeli, Tollite portas, and Ecce virgo concipiet are, respectively, the Introit, Gradual/Alleluia, and Communion. All are set for five voices, and the first two motets are characterized by short three-voice sections within; the Gradual’s picture of ascending the holy hill (first a single voice, and then two lower voices in thirds) is so simple an action (the holy hill is a musical scale spanning an octave) that almost any other composer would have made it sound jejune. But the high level of Byrd’s musical and theological inspiration results in music of sensitivity and grandeur throughout (even in the brief—but decidedly not perfunctory—Communion motet). Lassus was one of the most prolific composers of the period, celebrated and respected throughout Europe; his bipolar character (described as ‘melancholia hypocondriaca’ at the time) fuelled his ability to write music expressing a huge variety of emotions. Omnes de Saba was published at the end of Lassus’ life and is a double-choir tour de force which begins with an exotically powerful opening that portrays the richness and strangeness of the oriental kings.

Claudio Monteverdi was the musical giant of the early seventeenth century. He stood with one foot in the late Renaissance and one in the early Baroque—this led to the self-identification of two styles in Monteverdi’s music. In keeping with contemporary rationalist thought the description of the two styles was direct and mutually exclusive. In the ‘first practice’ the words were secondary to the vocal note-spinning; in the ‘second practice’ the musical gestures arose as a direct response to the meaning of the words. Put simply, the first practice represented the late-Renaissance polyphonic style (as exemplified by Palestrina) and the second practice represented the new Baroque style (although neither of the terms ‘Baroque’ or ‘Renaissance’ had been coined at the time). Monteverdi wrote in both styles, and indeed in a mixture of the two depending on the genre and function of the composition. Although the Mass for four voices was published almost eight years after the composer died, it is primarily a first-practice work. Yet the directness of some of the word-setting is a testament to the second practice so that even when Monteverdi writes imitative polyphony in the Gloria, there is little to link Monteverdi’s athletic writing with that of Palestrina’s polyphonic arches. Similarly, although the Sanctus and Agnus Dei both begin with first-practice expositions, passages such as the haunting setting of the words ‘dona nobis pacem’ represent the new order, albeit in nostalgic idiom.

From Westminster Cathedral’s earliest years, alongside the fascination with early vocal repertory, composers have been commissioned to contribute to the canon; when they have done so the choir’s antique musical diet has frequently been at the forefront of those composers’ imagination. Charles Wood provides a critical link between two generations of British composers, as represented by his teachers Stanford and Parry and his pupils Vaughan Williams and Howells. The six-voice Nunc dimittis was commissioned for Westminster Cathedral by Richard Terry in 1916 and shows Wood writing in a grandiose style whose reference to an earlier polychoral style is palpable. Ninety years later Matthew Martin wrote Adam lay ybounden for Westminster Cathedral Choir: yet again echoes of the choir’s early repertory are audible, although here the influence is more obviously that of the Middle Ages rather than of the Renaissance. The bare harmony of the opening is a clear reference to medieval harmonic practice, and later on the two treble voices weave the opening eight notes of the plainchant Marian antiphon Ave maris stella into the rich but transparent texture.

Along with its spectacular choir, another notable musical resource in Westminster Cathedral is the grand organ. Inaugurated in 1922 by the distinguished Parisian organist Marcel Dupré, the instrument was built by Henry Willis III with advice from the brewer John Courage. Its original complement of thirty-three stops became seventy-eight in stages, and the organ has been played in recital by some of the finest practitioners in Europe (Louis Vierne, Fernando Germani, Jeanne Demessieux, Jean Langlais, George Thalben-Ball, and Ralph Downes to name but a few of the departed). The grand organ is heard on this recording in a sequence of improvisations: first as a Christmas Eve ‘strepitus’ (literally a wild noise) immediately after the intonation of the Gloria of George Malcolm’s 1959 Missa Ad praesepe; secondly as festal accretions to the alternatim eighth-tone Magnificat; and thirdly as an ultimately blistering voluntary to end the Epiphany sequence.