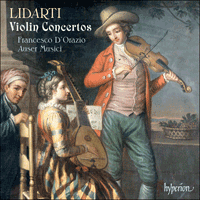 Auser Musici is a vocal and instrumental ensemble which, taking its name from an antique river in the plain of Pisa, brings together instrumentalists and singers with an international reputation for historical performance practice. The ensemble’s first release for Hyperion was highly praised and we are delighted to present their second disc.

The eighteenth-century Italian composer Christian Joseph Lidarti’s three violin concertos are all recorded here for the first time. These charming works constitute an important Italian bridge between the baroque violin literature and the music of the classical period. They are virtuoso works of great technical difficulty, clearly written for the finest players of the day. Lidarti’s String Quartet in G major is a delightful example of his chamber music: a work characterized by its antiquated style, with the two violins in constant dialogue accompanied by the viola and cello.

‘The enchantingly radiant quality of D'Orazio's playing and Lidarti's music … D'Orazio possesses just the right kind of lithe, flexible and elegant and pure sound this music cries out for, and he directs Auser Musici (familiar from an enchanting disc of Boccherini Flute Quintets) with flair, imagination and in the slow movements a moving sensitivity to line, dynamic and harmonic pacing’ (International Record Review)
‘The three violin concertos … would happily stand comparison with Haydn's works in the genre. Soloists Francesco D'Orazio gives fine accounts of Lidarti's technically demanding music and his cadenzas are nicely in the style of the period … all four works reveal a composer with a keen sense of dramatic melody … these are all world premiere recordings, and violinists looking for new repertoire should certainly hear it’ (Early Music Today)
‘Tunefulness, energy and general amiability … a true Classical period sensibility … the violin concertos are directed with verve and grace by the virtuoso soloist, Francesco D'Orazio … he is a lithe, elegant and characterful performer and his elaborate cadenzas are delightfully playful’ (Goldberg)
‘Christian Joseph Lidarti (1730–95) is another new name to learn and not forget again. Re-discovered for these premiere recordings by a Pisan vocal and instrumental ensemble, this is another composer to scotch the 'canon' which dominates concerts and recordings. Some 400 works of his can be found in the British Library and in a collection in Tuscany. These here are undated, but this eighteenth-century Italian composer bridges the baroque and classical periods. They are superbly realised by the consummate artistry and virtuosity of Francesco D'Orazio … an excellent first for Hyperion’ (MusicalPointers.co.uk)

For the history of European music the eighteenth century is an age characterized by intensive touring and widespread migration. While hundreds of Italian singers, musicians and composers emigrated to different parts of Europe for work, travelling through Italy was still a fundamental experience for many young and talented musicians coming from the North. In 1769 the young Mozart left Salzburg and arrived for the first time in Italy. Less than twenty years earlier he had been preceded by another Austrian composer, Christian Joseph (or Cristiano Giuseppe) Lidarti, who was never to leave the country of his ancestors after his arrival in 1751.

Lidarti was born in Vienna on 23 February 1730, but his father, Giovanni Damiano Lidarti, was Italian; the young Lidarti had his first composition classes with his cousin—whom he called uncle—Giuseppe Bonno, Kapellmeister of the Imperial Court, who had studied for ten years in Naples with Leonardo Leo. As with many other musicians of the time who travelled around Europe, Lidarti had a precise aim for his journey in Italy: to meet the famous Niccolò Jommelli and to obtain composition classes from him. He succeeded in this only six years later, in Rome, but he was probably disappointed after such a long wait and he completely abandoned any aspiration to compose for the opera. From that point he wrote only instrumental music. During the same year, 1757, he was appointed as a musician at the church of Santo Stefano dei Cavalieri in Pisa, where he worked until at least 1784. He died in Pisa in 1795, leaving six children borne to the noble Pisan woman Anna Vettoria Scorzi.

Most of the information we have about Lidarti comes from an autobiography titled Aneddoti musicali, which in 1774 he sent—together with his portrait—to Father Giovanni Battista Martini, an Italian collector and important music historian. The English traveller and musicologist Charles Burney met Lidarti in 1770 during his time in Italy, a sign of the great esteem in which the composer was held. If Lidarti was unable to compete with the music currently being written for the opera, he became famous as a virtuoso on a range of instruments that were prevalent at the time: the violin, cello, keyboards, harp (which he learned from Cistercian monks in Austria when he was young), and finally the traverso, or baroque flute (which he taught himself, becoming a sought-after teacher). As a testament to this incredible and versatile instrumental skill, 200 instrumental works have survived, mostly in the British Library in London and the Fondo Antonio Venturi in Montecatini Terme, Tuscany. These include compositions for chamber ensembles—duets, trios, quartets and quintets—and concertos for solo instrument and orchestra.

As an example of Lidarti’s chamber music, this recording by Auser Musici includes the Quartetto in G major, which belongs to a collection of quartets found in the Butler Library, New York. These same quartets were published in Paris (by Venier in 1768) as ‘Sinfonias’, in line with the late-baroque practice of instrumental music existing in two versions, chamber and orchestral. On the title page, in order to secure its place in the collection, the piece is called ‘Quartetto 7’. It is in three movements: Larghetto (2/4, G major), 80 bars with a repeat placed exactly half way through, with a cantabile theme and a series of arpeggios; Allegro (2/4, G major), 107 bars also divided into two halves with a repeat after the first 41 bars; Tempo di menué (3/4, G major), 70 bars with a repeat in the middle. The Quartet is characterized by its antiquated style, with the two violins in constant dialogue while the viola and cello play an accompanimental role, filling out the counterpoint. Great attention is given to detailed phrasing, and to indications of tempo and expression: the result is a work of enormous sensibility and pleasure.

Lidarti was particularly active in composing chamber music for string instruments. Although he was celebrated as a great cellist—he wrote and performed a cello concerto for the Jewish community in 1783—the violin was his first instrument, from his earliest lessons in Vienna. The three violin concertos on this disc, all recorded here for the first time, constitute an important Italian bridge between the baroque violin literature and the music of the classical period.

We have only a single source for Lidarti’s three violin concertos, at the Library of the Paganini Conservatoire in Genoa. Although these concertos have been numbered 1–3, there is no evidence that this was the composer’s ordering. The A major Concerto (No 3) is for solo violin and string orchestra, while the other two include wind instruments. If we analyse the three concertos it is possible to suggest a different order of composition, starting with the A major Concerto, for strings only, which is the most redolent of older styles, then the D minor Concerto, and finally the C major Concerto, which seems the most advanced.

The first movement, Allegro moderato, of the Violin Concerto in A major recalls the structure of Haydn’s Concerto in G major, HobVIIa:4, using a melodic phrase—itself a common thematic idea in instrumental music since Vivaldi—characterized by a pointed dynamic rhythm, as an aria with variations. The solo part is, from the outset, technically demanding, with continuous leaps to the extreme points of the violin fingerboard alternating with full chords. The Adagio in D major (without viola and bass), is played sempre piano throughout, with music that sounds more suited to the theorbo than an orchestral accompaniment. The melody seems to be somewhat uncertain or incomplete, but the balance is restored in the cadenza. The ‘tutti’ of the third movement, Allegro in A major, exudes dynamic momentum in its alternation of quadruplets and sextuplets. The violin’s first solo is enriched with ornaments that are typical of the contemporary composer Nardini. The second solo, more archaic, evokes the bird-like sound of the recorder in typical Vivaldian fashion. These features all root the composition to the period of the galant style.

The Violin Concerto in D minor begins with a substantial opening movement, Allegro; the addition of wind instruments gives the concerto a timbre that has the flavour of an opera seria. The solo violin’s entry, with its relentless virtuoso difficulties, returns us firmly to concerto territory, the bravura violin-writing being fit for contemporary virtuosos such as Tartini. This movement is based on a single theme, with variations. The Adagio in F major (without horns) is just 23 bars long, a gentle episode that introduces an elegant theme reminiscent of Johann Adolf Hasse. The third movement, Tempo di minuetto, is like a ballet in galant style, but full of chords that anticipate the later Sturm und Drang period. The violin-writing is superbly idiomatic, and sometimes seems to allude to the atmosphere of a Vivaldian concerto alla rustica.

As in the D minor Concerto, the first movement of the Violin Concerto in C major, Allegro maestoso, is long. For the first time, however, the structure is divided equally into two parts, as in Haydn’s model. The first theme can be defined as ‘symphonic’, with virtuoso variations for the soloist (more demanding than in Mozart’s concertos, for example); the second theme is more ‘operatic’ in character, although still with a surprising richness of technical resource, including parallel thirds and the picchiettato technique usually associated with Paganini. The soloist offers another surprise (from 4'52), in a sort of accompanied gypsy cadenza, Moderato, before the cyclical return to the first theme. The brief Adagio (for strings only) develops a series of dissonant chords in a movement rich in affetti, echoing Sturm und Drang; in the final bars Lidarti seems to evoke the painful opening of Pergolesi’s Stabat mater. The Presto is like a dynamic military march that stands between a Viennese Divertissement and an Italian comic-opera-style symphony.

Although these concertos by Lidarti cannot be counted among the greatest violin masterpieces of the late eighteenth century, alongside the works of Haydn, Mozart and Viotti, their revival certainly helps us to understand a still-neglected area of musical history, when the most famous Italian violinist-composer was Lidarti’s contemporary Nardini. The relationship between Lidarti’s concertos and those of Haydn seems to reveal a direct contact between the two composers—something that is unfortunately not corroborated by the autobiography Lidarti sent to Martini. It is interesting that three of Haydn’s four concertos for violin share tonalities with Lidarti’s (C, A, D). But it is certainly the great technical difficulty of Lidarti’s violin concertos, possibly written many years apart from each other, that makes us believe that they were written not simply for the composer’s amusement, nor for everyday performance in Pisa, but for important virtuoso violinists.