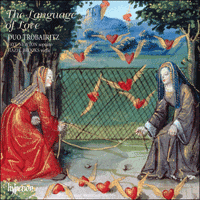 The Language of Love

The pain of unrequited love, the pleasures of spring, foiled seductions and cruel husbands, and the chivalry of serving a liege-lady: in this recording Duo Trobairitz explore different aspects of love as depicted in the music and poetry of the 12th- and 13th-century troubadours and trouvères.

The concept of courtly love began in southern France during the twelfth century. Celebrating an idealized form of love or sexual passion, it developed into a sophisticated and aristocratic code of behaviour. The courtly love ethic spread rapidly through European court society and the music became extensively varied, developing different genres. Duo Trobairitz give examples of the canso (a song that speaks pleasingly of love), the alba (a dawn song, in which a lovers’ tryst is interrupted by the coming of dawn), the pastourelle (usually about the attempted seductions of a peasant girl by a knight) and other styles, by turns humorous and tragic.

Duo Trobairitz are Faye Newton (soprano) and Hazel Brooks (vielle) and The Language of Love is their debut CD. They interpret medieval music in a way that is true to its historical roots while being entertaining and meaningful for a modern-day audience. They take a melody and a text, and, through a combination of scholarship and imagination, bring the meaning and emotion of the text to life. This disc is a delightful introduction to this rich repertoire.

‘Most of these songs from medieval France explore the infinite emotional complexities of hopeless love. Soprano Faye Newton characterises their wide-ranging, rhapsodic melodic lines so as to evoke both unbearable pain and despair and brief moments of joy. On the lighter side, she brings wry humour to tales of pastoral seduction, and of a spirited wife whose husband objects to her boyfriend. Hazel Brooks's piquant vielle provides atmospheric accompaniments that perfectly enhance all these moods, as well as some delightful dances’ (The Daily Telegraph)
‘This is among the best recordings of this repertoire … I will always enjoy being challenged to listen to these works in such fresh and sensitive interpretations as these’ (American Record Guide)
‘Duo Trobairitz re-create the sound world and the artistic idiom with sufficient authority that, were the original creators of this music to come back and hear these performances … they would have stamped their feet in approval … the lovely anonymous Bele Doette in which Newton's disarmingly charming voice and Brooks's sensitive playing on the vielle evoke a world which, while distant and remote from ours, clearly relished the same profound response to the kind of emotions which affect mankind, be it a twelfth-century knight or a twenty-first-century audiophile. On the subject of audiophiles, Hyperion has captured these delightful performances with ideal depth and intimacy’ (International Record Review)
‘An exemplary medieval disc from this young duo. The troubadour material is various … and the performers are beguiling. Faye Newton's pure, vibrato-light soprano suggests Emma Kirkby with rouged cheeks; while Hazel Brooks's accompaniments lift the vielle, a rustic lyre, to an instrument of enchantment … with these artists time stands still. A 'chill-out' hit in the making’ (The Times)
‘Faye Newton and Hazel Brooks build compelling, eloquent performances around the evocative words of their repertoire’ (Classic FM Magazine)

‘There are some outstanding renditions here … Newton is fresh-voiced and immediate, and Brooks is a vigorous accompanist’ (Early Music)

The pain of unrequited love, the pleasures of spring, and the chivalry of serving a liege-lady: with the songs on this recording we explore different aspects of love as depicted in the music and poetry of the troubadours and trouvères. The extant material of this period is often given the general description ‘courtly love song’, and yet there are in fact many distinct genres of song within this. In the thirteenth-century treatise thought to be by Jofre de Foixà entitled Doctrina de compondre dictats (‘Theory of composing poems’), we are given the earliest descriptions of the different genres of troubadour poetry. The author differentiates between the canso, alba, dansa and planh to name but a few, and also mentions the poems’ melodies, relating them stylistically to the theme, structure, function and mode of performance of the songs.

The concept of courtly love developed in southern France during the twelfth century. Celebrating an idealized form of love or sexual passion, it developed into a sophisticated and aristocratic code of behaviour. Women were presented as objects of worship who held the upper hand over their lovers. Traditional roles were reversed as the lady became the master, and the lord the humble servant. In troubadour poetry the term midons (‘my lord’) was frequently used to describe a beloved lady whose every wish was the lover’s command.

The term ‘troubadour’ means literally ‘finder’ or ‘inventor’. The early troubadours were based at the courts of Aquitaine, Poitou and Auvergne from the turn of the twelfth century. Far from being wandering entertainers or minstrels, they were often of noble birth, highly educated and skilful poets, musicians and singers. They composed poetry in the ‘langue d’oc’ of southern France, also referred to as Occitan or Provençal. The earliest known troubadour was Guilhem de Poitou (1071–1126), 9th Duke of Aquitaine and grandfather of Eleanor, who became queen of France and later (at her second marriage, to Henry II) queen of England.

The most common compositional genre was the canso, which according to the treatise, ‘must speak pleasingly of love’. It frequently deals with unrequited or distant love. The two cansos in our programme are Lo rossinholet salvatge and Can l’erba fresch’. Both are typical in the way that they open with a contrast between the joys of nature and the despair of the poet, who swings between dreams, pleas and feelings of bitterness towards his lady.

One of the most famous composers of his day, Bernart de Ventadorn (c1130–c1190) was extremely prolific. Although reputedly of humble origin, his fame and popularity as a troubadour spread very widely and he moved in the highest circles, including being present at the court of Eleanor of Aquitaine. His work had a huge influence on the next generation of poet-composers including Gaucelm Faidit (c1150–c1220), who dedicated at least thirteen songs to Maria, Viscountess of Ventadorn, including Lo rossinholet salvatge, where he addresses her by name in the tornada (final short stanza). In Bernart’s tornada, the poet hands over his finished composition to a messenger, to be delivered to the lady. Although Gaucelm’s melodies are beautiful, he is reputed to have been a dreadful singer himself! Nevertheless he clearly enjoyed the good things in life: rich food (from which he became very fat), ladies (he had a number of affairs and married a prostitute), and games of dice (according to his vida, which may not be entirely factual, he came from a middle-class background and only became a musician from necessity when he lost all his property from gambling).

The alba (or dawn song) is a troubadour genre in which a lovers’ tryst is interrupted by the coming of dawn. According to Jofre’s treatise, it should ‘praise the dawn if you have won the pleasure for which you went to the lady; and if you do not win it, make the alba curse the lady and the dawn’! Reis glorios by Guiraut de Bornelh (c1140–c1200) is probably the most famous song of this type. The final verse is thought by some to be spurious but we have included it as we believe it gives the song a whole new dimension. It is present in only one of the sources, the Vienna Manuscript, which contains a narration of the story of Tristan and Isolde in French prose with songs interspersed at key points in the story. In this context the lovers who are meeting secretly are clearly Tristan and Isolde and the song is sung by an accomplice who is keeping watch to warn Tristan that it is time for him to leave. The last verse is Tristan’s reply and was probably added to make the song more relevant to the story.

The courtly love ethic spread rapidly throughout European court society. Within France, the northern trouvère school developed from the earlier troubadour tradition. Eleanor of Aquitaine is thought to have been influential in this. When she married Louis VII of France and moved north to the royal palace in Paris she took with her an entourage of lively southern courtiers, including musicians, and thus the style spread. Writing in their own language, the ‘langue d’oïl’ (medieval French), they adopted the existing troubadour genres and also developed their own. Refrain songs become much more common. Vastly more material has survived from the trouvère period than from that of the troubadours.

The trouvère pastourelle shares the same subject matter as the troubadour pastorela, the theme of which is the attempted seduction of a peasant girl by a knight, and is usually light-hearted in character. Generally the knight is outwitted by the girl, but in our example (En ma forest), he gets his wicked way! Bele Doette and En un vergier are examples of the chanson de toile, setting a scene and telling a story where the central character is female. Songs of this genre typically begin with the lady sitting spinning or looking out of a window, dreaming of her lover. Bele Doette however is reading a book, which shows her to be a lady of some education. This powerfully moving song has a spellbinding melody and heartbreaking words. In contrast, En un vergier has a happy ending although at the beginning the lady is pining by a fountain. With its depiction of a cruel husband this song is also related in theme to the mal mariée genre. A perfect example of a mal mariée song is Por coi me bait mes maris?, a delightful tongue-in-cheek piece which gives us an insight into the medieval sense of humour.

Colin Muset (fl c1200–1250) worked in Champagne and Lorraine. He began life as a jongleur (a lowly minstrel who performed the compositions of others) and in time rose to the higher status of trouvère (poet-composer). This explains why many of his songs are conceived and written from the point of view of a lowly musician, often bemoaning his lot and offering a ‘realistic’ and satirical comment on society. Volez oir la muse Muset? presents the experience of a fiddle-player who has fallen in love with his high-ranking patroness. Poignant and amusing at the same time, the text uses clever word-play on the words muse, muser, muset and the composer’s own name Muset, which lends it a delightful—and also melancholy—personal touch.

Our only source of purely instrumental music from medieval France is the thirteenth-century Manuscrit du Roi and it is from this source that the dances on this recording are taken. The fact that instrumental performances were largely improvised is perhaps the reason that so little instrumental music from the period is extant. All the dances in the Manuscrit du Roi are in estampie form, consisting of a number of sections, each of which repeats with open and closed endings. As such the form is infinitely extendable, and we have added sections of our own in accordance with medieval tradition to extend [La Prime Estampie Royal], which is incomplete where the manuscript is damaged, and Dansse Real, which is very short in the original. La Tierche Estampie Roial and La Quarte Estampie Royal are as they appear in the manuscript. Johannes de Grocheio (fl 1300) described estampie form as ‘difficult’, thus causing young people to concentrate and refrain from base thoughts, and said such dances should be played on the vielle. We have taken his advice.