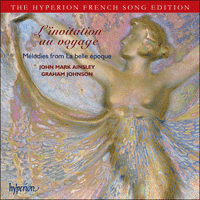 This latest recital from the eternal spring of Graham Johnson’s pioneering research is entitled L’invitation au voyage (four settings of the famous Baudelaire text are included) and takes us on a fascinating armchair tour of twenty-four mélodies from ‘La belle époque’, that period of ‘settled and comfortable life in France preceding the First World War’ (Oxford Dictionary of Phrase and Fable). No fewer than eight composers are new to the Hyperion catalogue, already so rich in French song, and while these microcosms of salon charm are rarely sublime, every note is eminently civilisé.

So change the wallpaper for something a bit more fin de siècle, allow yourself to join Graham Johnson and the exquisite John Mark Ainsley for a magical hour-and-a-half (time allowed for the refilling of glasses, of course).

Comprehensively annotated and generously illustrated, this new addition to The Hyperion French Song Edition is essential for anyone with a care for a time when nothing really mattered.

‘A disc to treasure’ (BBC Music Magazine)
‘John Mark Ainsley understands the idiom of these beguiling songs and delivers them with grace, fluency and clear diction … Graham Johnson's playing is as vivid and piquant as his booklet notes. A delectable disc’ (The Daily Telegraph)
‘Ainsley—urbane, sexy and witty throughout—is at his absolute best’ (The Guardian)
‘Graham Johnson is quite literally changing the way we hear French mélodie. What a voyage to be invited to join!’ (International Record Review)
‘How does Graham Johnson do it? Once again, he has explored territory that few today have even considered worthy of investigation, and once again, he has come up with an extraordinary CD’ (Fanfare, USA)
‘One of the finest examples of Gallic song performance’ (MusicWeb International)
«Comme toujours, John Mark Ainsley touche à la perfection tant par le style que pour son impeccable diction, et Graham Johnson poursuit en maître artisan son indefatigable exploration du monde du lied et de la mélodie» (Diapason, France)

The belle époque is rather a loose term. The Oxford Dictionary of Phrase and Fable defines it as ‘the period of settled and comfortable life in France preceding the First World War’. For an earlier generation of Frenchmen another ante-bellum époque might have appeared belle, those twenty-two years before the Franco–Prussian War when Napoleon III presided over a nation intoxicated with Meyerbeer and the cancan. Disregarding the generally undistinguished sequence of Bourbon restorations, other time-travellers might wish to return to the imperial glories of the first (and according to Victor Hugo, the only) Napoleon. Reeling the spool of history further back, we encounter nostalgia for the ancien régime—as in, for example, the Watteau-inspired poems of Verlaine’s Fêtes galantes evoking the life of courtiers at Versailles. Nostalgia is the key word here, and it covers very many things. Older Francophiles do not need any help in thinking back to a land, before the homogenized European Union, where the phrase ‘Vive la différence’ really meant something. My generation has a dream of France that is suffused with powerful memories of old French films, Maigret, Jacques Tati perhaps; the inimitable Felix Apprahamian, music critic of the Sunday Times at the beginning of my career, used to recount his meetings with Les Six (and everybody else) in Paris; a generation or two older than Felix, James Agate used to talk of Sarah Bernhardt and Réjane, although we can savour these memories of his lost Edwardian youth only through the volumes of Agate’s autobiographical Ego. Francis Poulenc pitied those who did not have their home in Paris as deprived unfortunates, and yet Paris is as much an idea as a real place. Those of us who are not privileged to live there have always allowed music, art and literature to play a large part in the Proustian process of recalling our own particular temps perdus.

On this disc there are discoveries aplenty for the Francophile. As little known as most of this music is, it is of an astonishingly high standard: if it is true that there is little here that is sublime, every note is eminently civilisé. In terms of song one of the ‘beautiful’ aspects of this époque in France (and I suppose we mean the Third Republic between 1871 and 1914) was that serious music was often written by the same composers who wrote lighter music, or the composers of lighter music were expected to be every bit as musically literate as their serious confrères. As a result the whole of French musical culture was unified in a way that it could never be again, once jazz began its ascendancy. There were literally hundreds of well-trained composers contributing vast amounts of music to a thriving musical economy that had not yet been split into myriad pieces. The huge and unbridgeable chasm that now yawns between ‘classical’ and ‘pop’ did not exist in the same way: different singers, different voice productions, different publics, and all the sub-divisions symbolized in today’s multiple choices of entertainment on satellite TV, were a nightmare of the future. In the beginning, to use a metaphor from the 1950s, it was as if there were only two channels—the altruistic BBC, and the more commercial ITV, but one could hear decent singing on both. Thus there were always opera and operetta, serious mélodie and chanson/café-concert, but these were genres between which impeccably trained musicians, both composers and performers, moved with sure-footed grace. As inconceivable as it seems now, singers like Enrico Caruso, John McCormack and Adelina Patti were fêted in the world of opera, and equally at home singing ballads before thousands of people at the Albert Hall. Imagine a singer of today who would be equally distinguished at the Royal Opera House and at a pop gig at Wembley! A few opera singers of today try to bridge that gap in football stadia, but they can never experience the universal admiration accorded serious vocal artists by young and old alike. Artists of this kind were helped to stardom by the new technology of the gramophone record; but they could not realize that technology and market-driven aesthetics would help to disintegrate the certainties of a musical world that would soon change for ever.

At the turn of the century in England it was often deliciously difficult to tell the difference between an English ‘ballad’ and an English ‘song’—in many distinguished cases one genre blends into the other, and there is often no difference between an art song that is light-hearted and a wonderfully crafted ballad of serious intent. The same is true for the ‘mélodie’ and ‘chanson’ of the time. There are of course technical differences between the two forms, but the public always expected to hear both performed by real voices (something that was necessary in the pre-microphone age). Rhythm, always an essential thing in the performance of vocal music, was still subservient to melody and harmony. The invention of a memorable tune was a prerequisite for any kind of music. There was no need to make a special journey to ‘cross over’ because everyone was more or less on the same side: it was accepted that songs by Fauré might be almost as popular with the music-buying public as a risqué number from an operetta. And there were publishers who were prepared to print vast numbers of songs, often by composers whose success is difficult to imagine now. There was room for these composers to make their livings, to survive from day to day, because serious mélodies with texts by serious poets were not regarded as particularly arcane and elitist—there was always a chance that large numbers of the French music-buying public would take to a new song from whatever quarter.

This disc is a reflection of, and a tribute to, that age. Of course the composers Cressonnois, Pessard, Puget, Godard, Hillemacher and Paladilhe (and their heirs) would not have been delighted to learn that theirs are now largely forgotten names; they had of course hoped for better, as does every creative artist who ever puts pen to paper. They may have been unlucky in terms of history, but they had the good fortune to live in an age that trained them wonderfully as professional craftsmen, and sustained their activity with dignity and even a measure of profit. As far as I know none of these composers ended their life in penury. The many publishing houses of Paris (now reduced to a miserable few) seemed able to have put the work of all these composers into print. This reminds us of the vast musical apparatus that Paris supported during this so-called belle époque; although the history of German lieder has never been centred around a single metropolis, the lists of many hundreds of published (yet completely forgotten) song composers in Challier’s lieder catalogue of 1885 tell a similar story. And if the music on this disc is anything to go by, the melodic skill and sophisticated understanding of the voice that is to be found in the work of even the least known, or remembered, of French musicians is astonishing. It is clear that the musical system of the time produced many more skilled composers than we, in the twenty-first century, have the opportunity to study and evaluate. Some of these are genuinely neglected and need to be championed; others deserve a hearing at least. The songs on this disc are the tip of the iceberg in a veritable embarras de richesses.