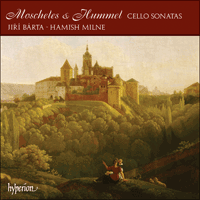 Johann Nepomuk Hummel and Ignaz Moscheles were frequently bracketed together in their day as the two piano virtuosos by whom—before the brilliant star of Liszt rose on the horizon—other performers might be measured.

Moscheles wrote his rich and virtuosic cello sonata in 1850/1, treating the piano and cello as equals. In movement three, subtitled ‘in Bohemian manner’, he reflects on his childhood in Prague with a rhythmic, folk-like melody that follows the form of a dumka. The sonata is dedicated to his friend and musical admirer Robert Schumann, who wrote thanking Moscheles saying: ‘You have given me joy and done me honour with the dedication of your sonata. More than thirty years ago in Carlsbad, when I was quite unknown to you, I refused to part with a concert ticket for a long time because you had touched it, so I kept it as if it were a relic. Little did I dream that I would be honoured in this way by so famous a master. Please accept my deepest gratitude!’

Moscheles was also something of a pioneer and was keen to awaken an interest in composers such as Bach, Handel and Scarlatti who he felt were being unduly neglected. In 1864 he published a set of so-called ‘Melodisch-contrapunktische Studien’, making use of ten preludes from Bach’s Well-tempered Clavier and adding a cello obbligato.

Hummel’s graceful Cello Sonata in A major is romantic, spacious and immediately attractive. It glides along with the cello expressively ‘singing’ over a rippling piano accompaniment; and the contrasting extrovert final pages of the third movement provide an exuberant ending.

This is Jirí Bárta’s first recording on Hyperion.

Johann Nepomuk Hummel (1778–1837) and Ignaz Moscheles (1794–1870) were frequently bracketed together in their day as the two piano virtuosos by whom—before the brilliant star of Liszt rose on the horizon—other performers might be measured. The eminent teacher Friedrich Wieck, father of Clara and reluctant father-in-law of her bridegroom Robert Schumann, pledged himself in 1830 to turn the twenty-year-old Robert into a pianist who would play with even more warmth and spirit than Moscheles and on a grander scale than Hummel. Contemporary accounts speak of the evenness and delicacy of tone in Hummel’s playing when he was at his peak in the 1820s and 1830s (he had made his debut as a child-prodigy pupil of Mozart in 1787); while Moscheles, whose career lasted from around 1808 in Vienna (where he came under the spell of Beethoven) until his last years teaching in Leipzig, was admired not only for the clarity of his touch but for a crisp and incisive tone. Charlotte Moscheles, who edited her husband’s letters and diaries, claimed that ‘trustworthy contemporaries’ were of the opinion that ‘Hummel had velvet under his fingers, and his running passages were like a string of pearls; whereas Moscheles, with his dashing bravura and youthful enthusiasm, carried everyone away with an irresistible force’. These characteristics are fully recognizable in the sonatas recorded here.

Hummel always preferred to use a light-toned Viennese piano of the kind with which he had grown up. Moscheles, however, lived to embrace the richer and more powerful pianos that were evolving in his day, and from his time in London between 1825 and 1846 he came to prefer Clementi’s instruments and later sometimes the stronger Erards. They were well suited to the more Romantic style that was entering his own music, and that drew him into friendships with Spohr, Chopin, and especially Mendelssohn and Schumann. Reviewing a concert in 1835, Schumann wrote of Moscheles and Mendelssohn playing not merely like two masters, but like two friends, like a pair of eagles, one rising, one sinking, boldly circling around each other. As a boy, Schumann had venerated Moscheles, to whom he later dedicated his Third Piano Sonata, Op 14 (the so-called ‘Concert sans orchestre’). Moscheles had already heard the young Clara play a sonata by Schumann which he privately thought rather contrived and somewhat involved, but interesting. Nevertheless, he was happy to accept the dedication of the Op 14 Piano Sonata, and to repay the compliment with the dedication of his own E major Cello Sonata, which drew from Schumann a delighted letter:

You have given me joy and done me honour with the dedication of your sonata. You have thereby provided me with an encouragement for my own efforts, in which you have always taken a friendly interest. More than thirty years ago in Carlsbad, when I was quite unknown to you, I refused to part with a concert ticket for a long time because you had touched it, so I kept it as if it were a relic. Little did I dream that I would be honoured in this way by so famous a master. Please accept my deepest gratitude!

The Cello Sonata, Moscheles’ second, was written in 1850–51, and published as ‘Sonate für Pianoforte und Violoncello’, Op 121. Giving the piano precedence in the title was a practice dating from classical times (and followed by both Mozart and Beethoven). But whereas Moscheles’ first sonata was published as ‘Grand Duo concertant for piano and cello or bassoon’, and indeed gave primacy to the piano and Moscheles’ virtuosity, the present work treats the two performers as equals. In 1851 the composer wrote:

I have been working very seriously on a sonata for piano and cello, and art, my beloved art stood a comforter at my side … Working on it I forgot all my worries; I wanted to be cheerful, then the music would have freshness. I have already played it with [Julius] Rietz and [Friedrich] Grützmacher … I am not thinking of publishing it yet—I like to set my compositions aside for a while so that they can finish fermenting, that is to say, so that after the heat of creation I can use the file a bit.

The opening Allegro is, as the markings qualifying it suggest, both expressive and impassioned, with rich and powerful piano writing. It ranges wide harmonically, with excursions into keys a third on either side of the main E major, first G sharp (notated as A flat for convenience) then C major, thus exploring a set of key relationships that had by the middle of the century become an important part of Romantic harmony. The subtitle of the Scherzo, ballabile, indicates the dance-like nature of a movement that moves between the major and minor modes of E, with a delightful tranquillo middle section, before settling for the major. For his third movement, Moscheles writes a Ballade which he subtitles, ‘in Bohemian manner’; he was born in Prague, and always retained fond memories of his upbringing in the city. The rhythmic snap in the melody—an accented short note followed by a long one—is characteristic of Bohemian folk music; the movement also follows the form of the dumka, at any rate as it was interpreted by Western musicians. In alternating fast and slow sections, such as Allegretto mingling with Andantino passages, Moscheles creates what is a kind of variation rondo form, decorated with coruscating piano writing. There are similar elements making a loose rondo in the finale, a busy virtuoso movement that includes a warmly lyrical melody in its ingredients.

Moscheles was also something of a pioneer with his interest in earlier music, and in his concern to awaken a general interest in composers he thought unduly neglected. He included Bach and Handel in his London ‘historical soirées’ in 1837, even playing some Scarlatti on a 1771 Broadwood harpsichord. In 1864 he published a set of so-called ‘Melodisch-contrapunktische Studien’, making use of ten preludes from Bach’s Well-tempered Clavier and adding a cello obbligato. He cited Mendelssohn and Schumann as precedents, and would have had in mind the piano accompaniments they had added to Bach’s unaccompanied violin music and ‘whose golden gleam heightens their effect, so that I too dare to bestow a new character on the Preludes through my concertante part’. ‘I have attempted’, he added, ‘to give them all, through the melody, a modern colouring, and by contrapuntal means to bestow on them a concertante effect, and thereby to make these wonderful Preludes more accessible to laymen and to the wider public.’ His No 4 is taken from Bach’s Book II, No 7 in E flat (the original keys are retained). No 8 comes also from Book II, No 6 in D minor, and makes some use of imitation in the cello part before a singing melody takes over. No 9 is from Book I, No 4 in C sharp minor, and this time leads off with a noble cantabile in Moscheles’ most Romantic vein.

Hummel’s Cello Sonata in A major, Op 104, dates from the final phase of his career, when, despite continuing a busy touring career that took him as far afield as France, Poland and Russia, he had in 1819 settled into a comfortable life as Kapellmeister in Weimar. Here he and the aged Goethe were among the reasons drawing visitors to the town, over which presided the Grand Duchess Maria Pavlovna, daughter of the Tsar of Russia and one of Hummel’s composition pupils. In January 1824 he wrote and dedicated to her what the first edition described as his ‘Grande sonate pour Pianoforte et Violoncelle’. The qualifications to the opening Allegro—amabile e grazioso—could be said to describe the whole work. It is less a piece for virtuosos than for musical companions, amiable and graceful, with the opening cello song decorated by the piano. In the charming Romanze, the first word goes to the piano, with a melody later given gently varied treatment and a more assertive middle section. As with the final Rondo, there is an element of Hummel looking back over his long career, past his virtuoso achievements, to his classical origins; but the cheerful, extrovert closing pages serve as a reminder that Hummel had indeed been one of the most exuberant and impressive of pianists.