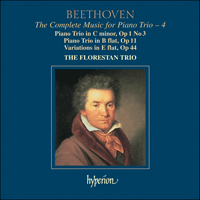 Hyperion’s record of the month for November brings us the triumphant final volume in The Florestan Trio’s cycle of Beethoven piano trios.

The disc opens with the Piano Trio in C minor, Op 1 No 3, Beethoven’s earliest masterpiece and a work brimming with dark lyric beauty. Radical enough for Haydn—perhaps out of jealousy—to advise against its publication, this work quickly became one of its composer’s most popular chamber works.

In both the other works on this disc Beethoven responded to the contemporary fashion for sets of variations on popular themes from operas. The Variations in E flat major, Op 44, are based on the hit number from Carl von Dittersdorf’s ‘The little red cap’, while the last movement of the Piano Trio in B flat major, Op 11, takes as its theme a favourite number from Joseph Weigl’s comic opera ‘Love at sea’. Ever keen to maximize his income, Beethoven switched his original top line from the clarinet to the more popular violin, so creating the charming piano trio we know today.

Needless to say, The Florestan Trio is on top form in this new recording.

All of the music on this album is also available as part of the specially priced box set Beethoven: The Complete Music for Piano Trio.

CLASSICAL CD OF THE WEEK (The Observer)

‘This completes the Florestan Trio's Beethoven series. I've been impressed throughout by their thoughtfulness, the way each passage is presented to maximum effect. There's an overall Florestan style too,—avoiding heaviness, keeping the textures light and airy, and giving every phrase an individual life and character’ (Gramophone)
‘This final instalment of the Florestan Trio's complete Beethoven cycle is every bit as impressive as its predecessors … no one who's been following this fine series need hesitate to acquire this very well recorded disc’ (BBC Music Magazine)
‘A most welcome completion of a superb cycle’ (International Record Review)
‘With the Florestan Trio's fourth and last Hyperion CD of Beethoven's complete piano trios you enter the Elysian Fields almost straight away … This Hyperion series has already been so rapturously received that the pleasures of this last disc come as no surprise. Even so, the performances' freshness can still amaze’ (The Times)
‘The Florestan Trio certainly does not miss the pungency in the writing, though the hallmark of its performance is the elegance of the playing. The careful weighting of each instrument brings a pleasing transparency, creating a more richly detailed account than many of the alternative recordings’ (The Strad)

When in November 1792 the twenty-one-year-old Beethoven left his native Bonn for Vienna, his plan was clear: to study composition with Haydn before launching himself as a composer-virtuoso in the tradition of Mozart, who had died less than a year before. With the help of enlightenend aristocratic contacts, the young firebrand quickly conquered the city’s salons with his dazzling keyboard improvisations. Soon after his arrival in the capital he became a house guest of Prince Lichnowsky, a gifted amateur pianist who kept his own string quartet. The Prince held regular private soirées at which Beethoven was a frequent star attraction; and it was at one of these soirées, probably in late August or September 1795, that he chose to present the three piano trios he had recently published as his Op 1, with a dedication to Lichnowsky.

Beethoven was determined to impress and challenge the Viennese musical elite with his first published opus. And with their weighty, elaborate structures (four movements rather than the customary two or three) and urgency of musical dialectic, the Op 1 trios were a full-frontal assault on the traditional notion of the piano trio: what had been an intimate domestic medium in Mozart’s and Haydn’s hands suddenly became a symphony for three instruments. In the first two trios Beethoven’s subversiveness was still cloaked in the language of the classical comedy of manners. But in the Piano Trio in C minor, Op 1 No 3, it erupted in a work of startling explosive vehemence and dark lyric beauty. Haydn, recently returned from London, was among Prince Lichnowsky’s guests; and according to the reminiscences of Beethoven’s pupil Ferdinand Ries, the master was full of praise for Nos 1 and 2 but taken aback by the C minor, Beethoven’s favourite – though Ries’s story of Haydn advising Beethoven not to publish it cannot be literally true, since the Trio was already in print.

Whatever Haydn’s misgivings, Beethoven’s earliest masterpiece in his most characteristic key gradually became one of his most popular chamber works. The mysterious, ‘pregnant’ unison opening is, coincidentally or not, reminiscent of Mozart’s piano concerto in the same key, K491 (still unpublished in 1795). But the music is profoundly Beethovenian in its abrupt, extreme contrasts, with violent rhetoric (the first page alone is peppered with sforzando accents) alternating with intense pathos and yearning lyricism. The famous heroic narratives of Beethoven’s ‘middle period’ are already in view.

The exposition ranges restlessly across an exceptionally wide tonal spectrum – E flat minor in the stormy transition, then A flat minor and E flat minor, again, in the second of the two ‘second subject’ themes. There is a thrilling moment at the start of the development where the original pianissimo echo of the main theme a step higher now moves a semitone lower, spiriting the music to a strange new tonal region (C flat major, enharmonically spelt as B major). Typically of Beethoven, the quiet opening phrase is reinterpreted as a strenuous fortissimo at the start of the recapitulation. Then, in perhaps the most breathtaking stroke of all, the music slips into C major (with the cello taking the lead, itself unusual in 1795) and then to the ‘Neapolitan’ key of D flat for a new cantabile development of the main theme.

In a classical minor-keyed work, a slow movement in the major usually, though not invariably (think of Mozart’s G minor symphony and string quintet), offers a measure of respite. Beethoven’s slow movement, a set of variations in E flat on a characteristically plain, hymn-like theme, certainly lowers the tension. But there are plenty of inventive, authentically Beethovenian moments: the boisterous third variation, with its brusque sforzando accents and twanging string pizzicatos; the fourth, in E flat minor, with its plangent cello solo; or the coda, initiated by a rich chromatic reharmonization of the theme. Beethoven lifted the coda’s final bars for the little C major Bagatelle, Op 119 No 2, probably composed much earlier than its opus number suggests.

The third movement, somewhere between a minuet and a scherzo, returns to the C minor world of the first movement, with its restless pathos, irregular phrase lengths and explosive dynamic contrasts. In the C major trio Beethoven has fun roughing up the cello’s lilting Ländler tune with cussed offbeat accents. The Prestissimo finale (the tempo marking is typical of the young Beethoven’s determination to be ‘extreme’) juxtaposes violence, suppressed agitation and, in the eloquent E flat major second theme, lyrical tenderness. In the recapitulation the second theme, enriched with a new cello counterpoint, turns from C major to C minor, with deeply pathetic effect. The astonishing coda, held down to pianissimo for virtually all of its eighty-seven bars, slips mysteriously to B minor and then moves, via C minor and F minor, to C major. But the ending is uneasy and equivocal, with minimal sense of resolution (the recent memory of F minor is too strong for that), let alone of major-keyed optimism.

In both the other works on this disc Beethoven responded to the contemporary fashion for sets of variations on popular themes from operas. Carl von Dittersdorf’s Singspiel Das rote Käppchen (‘The little red cap’) was first produced in Vienna in 1788 and reached Bonn in 1792, during Beethoven’s last months there. One of the opera’s hit numbers was the naive ditty ‘Ja, ich muss von ihr scheiden’ (‘Yes, I must part from her’), which Beethoven duly took as the starting point for the Variations in E flat major, Op 44 for piano trio. The work was probably finished by the time the composer left Bonn (a brief sketch dated 1792 survives), though it did not appear in print until 1804 – hence the misleadingly high opus number.

Dittersdorf’s comically rudimentary tune is a vision of dry bones, as bare as the famous ‘Eroica’ theme which it faintly resembles. On it Beethoven builds fourteen variations, decorative in the eighteenth-century tradition (the theme is always easily recognizable), but entertainingly contrasted in spirit and texture. The lusty, syncopated tenth variation, for instance, is followed by an almost exaggeratedly demure dialogue for the strings, while the delicately tripping twelfth is disrupted by an uncouth fortissimo outburst – Beethoven gleefully sticking out his tongue at rococo decorum. There are two slow variations in E flat minor (No 7 and No 13), a jolly, ‘hunting-style’ 68 final variation and a coda that recalls No 13, now in C minor, before a brief Presto send-off.

The Piano Trio in B flat major, Op 11 started life in the winter of 1797–8 as a trio for the rare combination of clarinet, cello and piano. But with an eye on maximizing sales, Beethoven published it in an alternative version for orthodox piano trio, transferring the clarinet part, with minimal adjustments, to the the violin. Compared with the ambitious Op 1 trios, this B flat trio, in three movements only, is a work of relaxation, showing the fiery sans-culotte in genial, urbane mode. Or so it sounds to us. When it was published, though, the ultra-conservative critic of the Allgemeine musikalische Zeitung found the trio ‘difficult’ and took Beethoven to task for writing ‘unnaturally’!

The expansive opening Allegro con brio, with its arresting unison opening, has little of the dialectical urgency of the first movements of the Op 1 trios. But Beethoven being Beethoven, there are many arresting and piquant touches. After an emphatic close in the dominant (F major), for instance, the music is slyly deflected through D major and G minor before the expected ‘second subject’ (a gracious, dolce tune, rhythmically related to the first) finally emerges. The soulful theme of the E flat Adagio, sounded by the cello in its tenor register, is akin to the minuet of the recently composed G major Piano Sonata, Op 49 No 2, later recycled in the Septet, Op 20 (in Beethoven’s sketches the two themes were virtually identical). There is a typically dramatic and poetic modulation from E flat minor to a pianissimo E major at the movement’s centre; then, with the restoration of E flat major, the theme is embellished with glistening keyboard figuration.

It was probably the Viennese clarinettist Joseph Bähr, for whom Beethoven wrote the original version of the work, who suggested the theme for the variation finale: a favourite number from Joseph Weigl’s new comic opera L’amor marinaro (‘Love at sea’), premiered at Vienna’s Burgtheater in October 1797. According to Beethoven’s pupil Carl Czerny, the composer often contemplated writing an alternative finale and letting the variations stand as a separate piece – presumably because he found them too lightweight. In fact, these nine variations are among the most inventive in early Beethoven. Highlights are the spare-textured No 2 for violin and cello alone, the two free variations in the tonic minor (Nos 4 and 7) and the trenchantly polyphonic final variation, which then pivots the music from B flat to G major for the start of the witty syncopated coda.