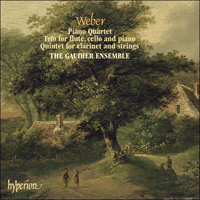 This new recital brings together all of Weber’s chamber works to employ more than two musicians. Opening the disc is the famous Clarinet Quintet, presented in a performance which sparkles with joie de vivre from the off. Written for the clarinet virtuoso Heinrich Baermann (whose recent acquisition of a new-fangled ten-keyed instrument opened up exciting new technical possibilities for the composer), the work quickly established itself in the public arena, its lyrical poise encompassing more than enough pyrotechnical showmanship to guarantee rapturous applause.

The Piano Quartet, written when the composer was barely out of his teens, sets a similarly ambitious challenge—this is composition at the cutting edge of the Romantic tradition where all four instruments are given scope to shine within a comprehensively convention-breaking structure.

The Trio for flute, cello and piano was completed in 1819, during the composition of Weber’s operatic masterpiece Der Freischütz. Graceful lyricism sits happily alongside impassioned intensity as the composer unites the three instruments—perhaps unlikely bedfellows—in a whole of pleasing integrity.

The Gaudier Ensemble is among the foremost of chamber ensembles, and these latest performances are every bit as thrilling as their enviable reputation would lead one to expect.

‘The talented members of the pan-European Gaudier Ensemble are perfectly equipped to convey these different aspects of Weber's musical personality … With a top-quality recording, this is a disc which does full and thoroughly entertaining justice to a still underrated master’ (BBC Music Magazine)
‘The Gaudier's performances are thoroughly enjoyable: gracefully shaped, rhythmically exuberant and relishing the music's sense of fun. In the Clarinet Quintet, Richard Hosford negotiates his pirouettes and vertiginous leaps with aplomb. The tricky instrumental balances in the trio and quartet are expertly managed, while pianist Susan Tomes's scintillating fingerwork is a delight throughout’ (The Daily Telegraph)
‘Richard Hosford is the ideal soloist here, supple and silky, with beautiful tone: and his intensely delicate, only-just-audible pianissimi in the slow movement are a joy to hear … the work altogether is a little masterpiece which deserves to be much better known. Hopefully this excellent disc, so beautifully played and recorded, will do much to disseminate it’ (International Record Review)

In Weber’s substantial list of works – 308 numbers in F W Jähns’s standard Thematic Catalogue – there are only three items of chamber music (Jähns excludes duos from this category). These are on the present disc. He never wrote a string quartet, despite growing up in the world of Haydn, Beethoven and Schubert, nor seems to have considered one; and had he done so, it might have been less in the spirit of Vienna than that of Paris. The so-called quatuor brillant, with a concertante solo violin and accompanying violin, viola and cello, arose not from the private chamber music gatherings in which the Viennese tradition had its roots but from the social conditions of Parisian public music-making. Here, a great virtuoso, whether a local luminary or a distinguished visitor, would display his talents to a concert hall filled with admiring connoisseurs. In Weber’s concertos, but also in his chamber works – written for himself as one of the great pianists of the day or for his friend Heinrich Baermann, the great clarinettist – virtuosity assumes a new Romantic condition, as the artist dazzles his listeners by heroically overcoming fearful difficulties or leads them into subtle new regions of sensibility.

When in 1807, at the age of twenty, Weber arrived in Stuttgart to take up a post as secretary to Duke Ludwig of Württemberg, he brought with him the Adagio of his Piano Quartet in B flat major, J76. It was already his custom to write his slow movements first, following them with a finale; only later would a first movement be added, or sometimes never written at all so that there are works which remain simply ‘Adagio and Rondo’. This reflects his lack of sympathy for the classical discipline of sonata form in an opening movement, and his greater attraction both to Romantic explorations into new areas of harmony and colour, and to increased instrumental virtuosity. Most originally, the Piano Quartet’s Adagio is less concerned with themes or melodies than with such unusual gestures as the opening chords on the strings answered by a piano flourish, or the effect of throbbing piano chords against impassioned, wide-ranging string phrases, or, in the wild central section, a chordal progression with forceful violin leaps against a murmurous running figure on his beloved viola. The balance between piano and strings in chamber music is notoriously tricky; with his devotion to novel textures and his acute ear, the inexperienced Weber has found his way to some fascinating solutions.

The Allegro which he added to open the Piano Quartet is also unusual. Though it is cast in sonata form, Weber abandons convention as soon as he interestingly can. This is most evident at the start of the development. For classical composers, this was generally the section in which the most inventive working out of themes would take place. Weber is less attracted to this than to finding new themes in unexpected ways. None is more beautiful than the singing viola melody to which the other strings and the piano defer. His recapitulation is more regular, and ends with a graceful gesture to the opening of the whole movement. Even in the Menuetto, which follows the Adagio, there are metrical and harmonic surprises, as Weber answers his soft, uneven opening phrases violently and in an unexpected key (A flat in the key of G minor). He goes even further in the trio section, in the middle of which a forceful return of the opening rhythm drives the music into another startlingly remote key, G flat. His finale is a pianistic tour de force, serving notice that here, barely out of his teens, was one of the pioneering artists of Romantic virtuosity.

The Quartet was completed on 25 September 1809. Five months later, having been briefly imprisoned for debt, Weber was escorted by the police across the Württemberg frontier and banished for life. Settling in Heidelberg and Darmstadt, he made musical friends to whom were added, on a visit to Munich in mid-March 1811, Heinrich Baermann. Two years older than Weber, Baermann had already made a name for himself as a clarinettist, and the warmth and richness of his tone and style gave the instrument an appeal to Weber which was rivalled only by that of the horn. A report from the Paris correspondent of the Leipzig Allgemeine musikalische Zeitung in 1818 praises Baermann’s skill, with particular mention for his musical taste and for the warmth of his tone, ‘which has not the slightest strain or shrillness in it, both of which are so common among clarinettists’. Weber wrote no fewer than six works for Baermann: a Concertino, two concertos, a set of variations with piano accompaniment, the Grand Duo Concertant in which two virtuosos are matched on equal terms, and the present Clarinet Quintet in B flat major, J182.

A note in Weber’s diary for 24 September 1811 reads, ‘Began comp: Quintett for Bär:’. Parts of the minuet and the opening Allegro were sketched over the next few days, though the Allegro was not finished until April 1813. Weber then presented the work, still lacking the final Rondo, to Baermann for his birthday on 13 April, and they tried the three movements out in Louis Spohr’s rooms on 3 May. Not until 25 August 1815 was the Rondo eventually added. Shortly before meeting Weber, Baermann had acquired a ten-key instrument by Griessling und Schlott that opened up new technical possibilities, and the music is clearly intended for Baermann personally and for his new clarinet. (Some twenty years after Baermann’s death in 1847, his son Carl made a version of this work which he claimed was based on his father’s performing tradition, and it is this which is used in the present recording.)

After introductory string chords, Weber opens his sonata-form Allegro with a pianissimo phrase rising and swelling from a high B flat, an effect made more accessible by the new instrument. High notes and their smooth linking with low ones feature in the invention, as does the greater ease with chromatic scales. The graceful slow movement, entitled Fantasia, includes two passages in which the clarinet soars up a long chromatic scale fortissimo, repeated pianissimo before the elegant melody is resumed. It is music not simply for show, but revelling in the new expressive possibilities which performer and instrument can now command. The lively Menuetto (subtitled Capriccio) enjoys the instrument’s ability to handle previously difficult fingerings; and the concluding Rondo, though including a brief Romantic shudder by the future composer of Der Freischütz, gives even the finest player plenty to think about in the final burst of applause music.

On 25 July 1819 Weber completed the Trio for flute, cello and piano in G minor, J259, in Hosterwitz, his peaceful summer residence up the Elbe above Dresden. It had its first playthrough in the Spohrs’ house on 21 November, when, he noted in his diary, ‘it went very well, and came off just as I wanted’. The work’s origins have been the subject of some confusion, but it was possibly written as a souvenir of convivial musical evenings during Weber’s Prague years, from 1813 to 1816, spent with two of his closest friends, the composer Johann Gänsbacher and his doctor Philipp Jungh. Gänsbacher was a good violist and cellist, and had toured with Jungh, whom he praises in his memoirs as a fine flautist.

As always with Weber, the opening movement has a highly personal approach to sonata form. It is melodically rich, with a graceful opening theme and a gentle second subject, a figure in octaves between cello and piano that comes to dominate the entire movement. Though the warm and impassioned development section begins with the second subject, and brings with it yet another new melody in the major key, it is with the opening theme that the movement ends. The Scherzo has no real trio section, but contrasts a violent, drumming theme in the minor with a graceful major-key flute melody for which Weber might have found room in his next work, Invitation to the Waltz. It is, however, the pounding piano octave theme that concludes the movement.

Unlike the other movements, the Andante has no diary date, suggesting that Weber may have made use of an earlier piece, perhaps one composed in Prague. The title ‘Schäfers Klage’ (‘Shepherd’s Lament’) refers to Goethe’s poem of 1802 about a lovelorn shepherd, set by many composers including Schubert. It was published in 1804 by the Weimar singer and actor Wilhelm Ehlers in a collection of guitar songs, upon which Weber based his subtly improved melody. Ehlers’ version also clearly suggested the strumming piano accompaniment to Weber, himself a proficient guitarist. The thematic richness of the work takes a new form with the Finale, which compresses into its eight opening bars a wide-ranging piano line and its answer in the bass, together with some trills that anticipate Caspar’s drinking flourish in Der Freischütz. The immediate answer is not development of them, but a completely new tune from the flute. This melodic profusion, in all its variety, permeates the movement, and it is in the extremes of contrast that the essence of the whole work lies. Even within a classical framework, Weber’s Romantic imagination is running high. That September, a few weeks after completing the Trio, he resumed work on the interrupted Der Freischütz.