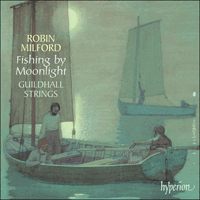 Robin Milford is one of those distinctive English composers who proliferated between the wars, but whose reputation suffered in the face of the avant garde establishment in vogue during the 1950s and ’60s. Milford composed a range of music, from short practical works for children or amateurs to large-scale works including oratorios, an opera and a symphony.

This delightful disc presents Milford’s music at its most quintessential and endearing. During the war Milford lost his six-year-old son to a road accident, a shattering personal catastrophe that blighted the remaining eighteen years of his life. Milford’s idiom deepened and matured, and his ability to distil a mood or atmosphere into surprisingly simplelooking textures is his most rewarding trait. The music on this disc ranges from the soaring intensity of the Elegiac Meditation for viola and string orchestra of 1946–7 (a meditation on the losses of six years of war, or perhaps Milford was thinking of his dead son Barnaby), to the spirited and easy-going Festival Suite, written in 1950 to mark the Festival of Britain the following year. Milford’s most famous work, Fishing by Moonlight, opens the disc, and is ravishingly performed by Guildhall Strings, with the composer’s grand-nephew Julian Milford at the piano.

‘This is music for an English summer evening, with a glass of wine to hand—rewarding in its unpretentious, melodious, nicely crafted way; especially when played with sympathy and elegance by Robert Salter and the excellent Guildhall Strings and so naturally balanced and recorded by Andrew Keener. Don't miss it’ (Gramophone)
‘The performances by Guildhall Strings are energetic and precise. Though a relatively small ensemble of 11 strings, they possess a Protean ability to convey a much plusher sound as required … dare we hope this CD will mark the beginning of a break for Milford? He's long overdue one’ (Fanfare, USA)

Robin Milford is one of those distinctive minor twentieth-century voices who seemed to proliferate in English music between the wars, but whose reputation did not fare well in the face of the avant garde establishment briefly in favour in his last years and the years following his death. Milford was born in Oxford in 1903 and educated at prep school, Rugby and the Royal College of Music (where his teachers were Holst and Vaughan Williams). He soon achieved publication, an early period crowned by his success in the last year of the Carnegie UK Trust’s publication scheme when his Double Fugue for orchestra was one of the works selected; it was conducted by his composition teacher, Vaughan Williams, at Queen’s Hall in February 1928. Of his early works, this CD features the suite Go, little book and the two short Orchestral Interludes, both dating from the late 1920s and published in 1930.

Milford was faced with the classic problem of most composers of his time, that of patching together a portfolio of freelance musical activities to keep body and soul (and after July 1927, his wife Kirstie) together, while trying to be a more or less full-time composer. He taught at a preparatory school and later at evening classes, he copied music and he corrected and edited piano rolls for the Æolian Company, until the latter came to a sudden end along with the market for player pianos and pianolas as a consequence of the Wall Street crash in 1929.

We tend to remember Milford in the same breath as Gerald Finzi, and indeed the two men met in 1929 and became close friends, Finzi advising Milford on his music; the influence is felt in several tracks on this disc. Both were countrymen, and they both responded to the natural world and English poetry in equal measure. As a professional, almost full-time composer Milford was prolific in producing practical music for all manner of local performers, choirs, schools and Finzi’s Newbury Players, yet Milford had constant self-doubts and made several suicide attempts, unfortunately finally successful in 1959. The problem was probably exacerbated by the fact that Milford came from a high-achieving family, his father being Sir Humphrey Milford, the celebrated publisher to the Oxford University Press.

Milford’s music is neoclassical in that he adopted the severe textures taught in the 1920s by his teacher Holst, and he cast most of his music in the smaller musical forms encompassing a classical, country-dance or folksong ancestry, and almost everything breaks down into short movements or sections.

Before the age of thirty Milford had established himself as a rising composer with a growing and varied catalogue of works. When his oratorio A Prophet in the Land, composed in 1929, was scheduled for the Gloucester Three Choirs in 1931 it must have seemed the climax of his early development. Yet this is a comparatively gentle work – it features the first modern use of recorder in a mainstream concert work – and it immediately pre-dates the blaze of Walton’s Belshazzar’s Feast at Leeds the same year, and like several other new choral works in 1931 it did not survive the comparison with that stellar sunburst.

Despite his personal doubts and financial difficulties Milford’s reputation continued to build with works such as The Darkling Thrush (a latter-day Lark Ascending). Later in the 1930s the BBC broadcast Milford’s Concerto Grosso and a Violin Concerto, and Vaughan Williams sang the praises of Milford’s Symphony to Adrian Boult and Arthur Bliss, though in the event only the Scherzo was broadcast. The present writer first came across the music of Robin Milford in the early 1960s when playing his recorder music – the Sonatina in F and his Three Airs – at local competitive music festivals. When writing such unassuming works Milford was producing the equals of other music in his catalogue; he did not write down to his audience, and such music exhibits all the characteristics of his other short pieces. Similarly Milford also wrote a variety of practical short choral works for amateurs or children, and in a piece such as the attractive, rollicking ten-minute setting of Abraham Cowley’s Drake’s Chair for baritone, chorus and orchestra it is clear that it is a variety of practical issues rather than the quality of the music that has kept it from performance.

During the war came the shattering personal event that effectively blighted the last eighteen years of Milford’s life, the accidental death of his son in May 1941, a week before his sixth birthday, in a road accident. For the Milfords, the most doting of doting parents, it was the ultimate catastrophe and it cast a long and bitter shadow.

Milford’s idiom deepened and matured but ultimately developed little stylistically in his last years, though his ability to distil a mood or atmosphere into surprisingly simple-looking textures is remarkable and his most rewarding trait. During the latter part of the war he produced various pieces and afterwards, although Milford continued to fret over it, the music continued to flow, including the Elegiac Meditation, Fishing by Moonlight, and the Festival Suite. At the end of his life Milford produced a full-blown four-act opera, setting Nathaniel Hawthorne’s novel The Scarlet Letter, the story of an illegitimate birth in a Puritan community, which allowed Milford to contrast individualism and passion with Puritan morality. It has never been heard.