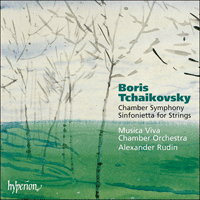 Boris Tchaikovsky—no relation—belongs to that generation of Soviet composers falling between Shostakovich (one of his teachers) and Kabalevsky on the one hand and Schnittke and Gubaidulina on the other. Born into a musical family, the young Boris saw his musical language reach maturity in the years following World War II; he then joined the many of his compatriot composers in making a living from writing for the theatre, for film and for television. Such a background immediately lends his ‘serious’ compositions an accessibility and appeal which could perhaps be generally described as having something of the ‘Shostakovich-without-the-angst’ about them.

The Sinfonietta for Strings of 1953 is the earliest work on this disc. Its four movements are laid out on traditional lines and share much of their harmonic language with Shostakovich’s early quartets. The six tightly focused movements of the 1967 Chamber Symphony betray the influence of Britten (unusual for this period in Soviet Russia) and Panufnik; hints of intrigue, even unease, disturb otherwise literal responses to the movement titles. This fascination with the ‘perfectly formed miniature’ finds its apogee in the numerous sets of studies in Tchaikovsky’s output. In the Six Études for Organ and String Orchestra of 1976 any hint of the florid or the self-indulgent is scrupulously avoided, making for a remarkable demonstration of the ‘power of the unsaid’.

This disc concludes with the short Prelude ‘The Bells’, one of Boris Tchaikovsky’s last works and perhaps an expression of his attachment to the Orthodox Church, his scepticism of the avant garde direction being taken by contemporary music, and his commitment to the preservation of a true Russian musical tradition. The more-or-less complete short score has been completed by one of Tchaikovsky’s composer-colleagues, Pyotr Klimov.

‘This disc—accessible in every sense of the word—is a useful addition to the discography of music written during the Soviet era. The sound is clean and bright. Worth exploring’ (International Record Review)
‘If you don't know this score, I urge you to grab this recording hurriedly: for a mixture of unhurried lyricism, gentle good humour, capable but lightly handled counterpoint, you'll find it hard to beat’ (Fanfare, USA)

Boris Alexandrovich Tchaikovsky (alternative spellings include Chaykovsky, Chaikovsky and Cajkovskij, depending on the system of transliteration adopted; we have chosen the spelling used by the Russian society devoted to the composer) belongs to the generation of Soviet composers situated chronologically and stylistically between Shostakovich, Khachaturyan and Kabalevsky, who were roughly ten years older, and Schnittke, Gubaidulina and Silvestrov, all roughly ten years younger. His musical language and artistic outlook came to maturity in the war and immediate post-war years, and although he was open to the new wave of musical influences that flowed into the country in the ‘Thaw’ period thereafter, he regarded these as potential enrichments rather than as demanding a radically new approach. Though no recluse – he gave numerous interviews and taught at Moscow’s Gnesin Institute in his later years – he tended to shy away from publicity. He wrote little or nothing about himself and was known for his stoical attitude, being reluctant to discuss any hardships he might have endured and regarding them as part and parcel of the life of a creative artist. By the same token he made no use of recommendations of the kind that might have helped to promote his music more widely. Nor was his work in any way headline-catching, being more inclined to dig down in the search for essential qualities than to erect impressive facades. Nevertheless, the advocacy of artists of the rank of Rostropovich, Kondrashin and Fedoseyev testifies to the widespread respect he commanded.

Tchaikovsky was born into a culturally aware family. His father, who carried a Belorussian passport, was a teacher who specialized in statistics and economic geography but also a capable self-taught violinist; his mother was a gynaecologist, and it was she who urged him towards a musical career. His elder brother was also a musician. There is no blood connection with the famous Pyotr Ilyich Tchaikovsky, but the composer/pianist Alexander Vladimirovich is Boris’s nephew. He entered the Gnesin School at the age of nine and in due course proceeded to the Moscow Conservatoire, where he studied the piano for three years with Lev Oborin, without graduating from his class (many of his student compositions are for the piano, but few of his mature ones). His composition teachers included Shebalin, then Shostakovich from 1946 until the anti-formalist campaign of early 1948 which saw Shostakovich banned from teaching, and Myaskovsky for a further compulsory year because Shostakovich’s students were deemed to have been contaminated. After graduation Boris Tchaikovsky did some piano teaching in a school, and for three years from 1949 to 1952 was an editor at a radio station, composing in his spare time. From then until his retirement he made a living, as did so many of his peers, from scores for radio plays, theatre, films and television.

Composed in 1953, the Sinfonietta for String Orchestra is the culmination of Tchaikovsky’s first compositional period, which also includes his C minor First Symphony, his opera The Star, and a number of works either based on folk material or composed for children (as was much Soviet music in the oppressive climate from 1948 until the death of Stalin). ‘Sinfonietta’ is an accurate title for a work whose four movements are laid out on traditional lines but lack the concentration, surface tensions and overall dramatic trajectory that would generally be expected of a Soviet symphony.

The first movement (Sonatina) opens with a long-limbed viola theme of clearly Shostakovichian stamp (it recalls one of the opening ideas of Shostakovich’s Fifth Quartet, composed the previous year but still awaiting its premiere). This theme passes to the other sections of the string orchestra before giving place to a metrically fluid contrasting chordal idea, initially pizzicato. The two ideas reappear in the concise development and in the even more concise recapitulation, and the movement is rounded off with a reflective coda. Like many of the waltzes in Shostakovich’s string quartets, Tchaikovsky’s second movement is fast-moving and muted in timbre; but unlike his teacher’s, this one is neither frantic nor particularly ill-at-ease. Both the opening violin tune and the contrasting staccato theme return at length on the cellos, the staccato idea gaining a new springy accompaniment. The model for the slow movement’s long-drawn, harmonically elusive theme is again to be found in Shostakovich’s early quartets. Only the entry of the lower strings confirms that the key is B flat major. When this idea passes to the violas the tempo quickens and the harmony darkens; and there is a further quickening for a pattering variation with an espressivo descant for first violins. The pattering motion then accompanies the return of the theme on the cellos as the movement moves towards its consoling close. The playful Rondo manages the delicate aesthetic balancing-act of a non-conflictual yet never trivial finale.

The Chamber Symphony carries a dedication to Rudolf Barshai, for whose Moscow Chamber Orchestra it was composed in 1967 (these being the same musicians for whom Shostakovich was soon to compose his Fourteenth Symphony). Its six movements are tightly focused, wiry and determined in character, rather in the manner of Shostakovich’s then brand-new Eleventh Quartet and of Britten’s instrumental music (another comparative novelty for Soviet composers at the time). The opening Sonata is in reality more of a prelude, its material being spun entirely from the initial downward strides on horns, violas and cellos with harpsichord punctuation, expanded on by crunchy grimacing chords for the violins. The following Unison displays affinities with Britten’s Second String Quartet and Panufnik’s Sinfonia Sacra and is even more austere than the Sonata, not just because it sticks so doggedly to the premise of its title, but also because of its fascination with symmetrical formations of intervals. The third movement is an angular, dissonant take on the idea of the four-voiced Chorale, juxtaposing pairs of oboes and horns, solo strings and harpsichord. Anchored to the double basses’ pedal A, the Interlude adopts a faux-naif tone; the longer it goes on the more intriguing, perhaps even disturbing, its little snatches of melody become. The most sustained musical development is to be found in March Motifs, which accumulates an impressive momentum in spite of its splintered surface character. The Symphony is then rounded off by a Serenade, but one that, like similarly titled movements in early and late Shostakovich, is not all that it seems. What to some may appear ‘harmonious and reconciling’ (to quote a Russian commentator) may to others sound like something altogether more ambivalent.

Études of one kind or another are dotted throughout Tchaikovsky’s output, even in works such as the Chamber Symphony where the title is not explicitly used. Like his fellow Shostakovich-pupil, Georgy Sviridov, and indeed like Shostakovich himself in his last decade, Tchaikovsky seems to have become increasingly concerned to probe the inner properties of seemingly inscrutable musical statements. In the Six Études for Strings and Organ of 1976 any hint of the florid or the self-indulgent is scrupulously avoided. The writing is not strictly twelve-note, though Tchaikovsky had earlier dabbled with dodecaphony and the experience of that discipline seems to have helped him to discover the suggestive power of the smallest musical cells, even of silence itself. The power of the unsaid radiates also from the understated organ part – from the fact that the instrument’s colouristic and dynamic resources are for the most part withheld or denatured.

The rocking motion of the preludial first study, touched off by the merest hints from the organ, sets the scene. This is followed by a fast study largely in pared-down two-part writing, with the organ’s repeated-note additions sounding uncannily like a balalaika. Mirror-form motifs are the driving force in the moderately paced third study, together with a brief central episode for strings that takes the ‘study’ idea to an extreme, this being the kind of rhythm exercise routinely inflicted on students in advanced conservatoire aural training classes. The merest snatches of figuration on the organ define the fourth study’s character as a kind of failed toccata, the failure symbolizing, it may be thought, Tchaikovsky’s distaste for the easy opportunism so rampant in Soviet music at the time, on both the radical and the conservative wings. With the C major fifth study we are once again in the realm of ironically sweet Bachian preluding, and the impulse towards passionate unfolding is once again choked. The sixth study is a finale of sorts, in that it goes the furthest in terms of developing its material.

In the last five years of his life, Tchaikovsky, along with conductor Vladimir Fedoseyev and a number of other prominent musicians who had remained in Russia despite the inimical post-communist conditions, was among the leading voices in the Russian Musical Society (more literally, Comradeship), whose principles included preservation of the nation’s musical traditions, scepticism towards the avant-garde, and attachment to the Russian Orthodox Church. In most respects these values were sharply opposed to such groups as the revived Association for Contemporary Music, founded around the same time by Edison Denisov. During these years Tchaikovsky completed few compositions other than a fine Symphony with Harp. But his Prelude entitled The Bells survives more or less complete in short score, with indications for bells on B flat and D. This delicate evocation has been orchestrated by Pyotr Klimov (born 1970), a talented composer in the Tchaikovsky circle.