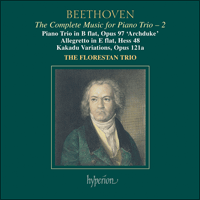 The idea that this plainly and indeed humbly presented disc—the Complete Music for Piano Trio, Volume 2—contains one of the greatest human utterances in any art-form, may come as a surprise. But it is true. The 'Archduke' Trio is one of the glories of exploring the piano trio repertoire and stands for many of us as the crowning triumph of the medium. Dating from Beethoven's richest transition, from the middle period towards his late works, the trio envelops the listener from the start and shows his ability to combine monumentality and intimacy as well as prayer and dance, on a vast scale and with awe-inspiring power. It has its title from the dedication to the Archduke Rudolph, good friend to the composer and dedicatee of many of his greatest pieces, and for once the nickname of a piece has an apt suggestiveness as to the stature of the music.

An important issue in the award-winning survey of piano trio repertoire by our old friends, The Florestan Trio.

‘With beautifully balanced recorded sound, it's a CD for repeated listening’ (Gramophone)
‘The playing of the Florestan Trio is memorable for its lyrical tenderness, its luminous sonorities and its rhythmic buoyancy’ (BBC Music Magazine)
‘The second issue in the Florestan Trio's projected recordings of all Beethoven's music for piano trio is one of this lively and sensitive ensemble's best. The players do justice both to the sweetness and spaciousness and to the quirky humour of the great Archduke Trio, which receives a richly satisfying performance’ (The Sunday Times)

Beethoven’s ‘middle period’ – roughly the years between 1803 and 1814 – immediately conjures up images of the furrow-browed, fist-shaking Titan railing against destiny. But the mighty struggles famously embodied in compositions like the ‘Eroica’ and Fifth symphonies, the ‘Appassionata’ Sonata and Fidelio are far from the whole picture. And in other works, among them the ‘Pastoral’ Symphony, the Fourth Piano Concerto and the Violin Concerto, the expanded range and scale of Beethoven’s symphonic thinking goes hand in hand with an unprecedented lyric breadth. In particular, the opening movements of all three – significantly marked Allegro moderato or Allegro ma non troppo – have a sense of serene spaciousness, with moments of profound reflective stillness, that is no less revolutionary or prophetic than the ethically charged strivings of the composer’s ‘heroic’ vein.

In Beethoven’s chamber music these predominantly lyrical, reflective works have their counterparts in a group of masterpieces from the years 1808 to 1812: the A major Cello Sonata, the E flat Piano Trio, Op 70 No 2, the G major Violin Sonata Op 96 and, noblest and most spacious of all, the so-called ‘Archduke’ Piano Trio Op 97. The Archduke in question was Rudolph, younger brother of the Austrian Emperor, an accomplished pianist and one of Beethoven’s composition students. Though the relationship between composer and his royal pupil-patron inevitably had its fraught and fractious moments, the two men maintained a warm friendship; and Beethoven rewarded Rudolph’s devotion and generosity by dedicating to him a succession of works including the Triple Concerto, the fourth and fifth piano concertos, three piano sonatas, the Op 96 Violin Sonata, the Große Fuge and the Missa solemnis, in addition to the B flat Piano Trio – a list that surely makes Rudolph the most richly endowed dedicatee in musical history.

Beethoven began to sketch the ‘Archduke’ Trio in the spa of Baden bei Wien during the summer of 1810 when, true to form, he was also engaged on a composition of radically different character: the violently compressed String Quartet in F minor, Op 95. He returned to the Trio in earnest the following March, completing it on 26th; he may, though, have revised it, as was his way, before the first performance, given by Beethoven himself (one of the last times he played in public) with the violinist Ignaz Schuppanzigh and the cellist Josef Linke at the Viennese hotel ‘Zum römischen Kaiser’ on 11 April 1814.

The serene, Apollonian tone of the Allegro moderato is set by the glorious opening theme, with its broad harmonic motion and mingled grandeur and tenderness. In keeping with the spacious scale of the whole movement, the theme is heard twice, first in a rich piano texture, then, varied and extended, in full trio scoring: already here Beethoven creates a depth of sonority, with the cello ranging across its entire compass, that is one of the work’s hallmarks. It is typical of this most tranquil of Beethoven’s great sonata structures that rather than modulating to the ‘tensing’ dominant, F, the music glides to the more remote G major for the equally lyrical second theme – the kind of key relationship Beethoven was to cultivate increasingly in his later works. In the development Beethoven takes each phrase of the main theme as a cue for calm dialogues between violin and cello, or strings and piano. At its centre is a hushed, mysterious duet for the two strings, pizzicato, against flickering piano trills, leading to a crescendo and the promise of a triumphant return of the opening theme. But Beethoven shies away from clinching the climax; and after a ruminative cadenza-like passage and a prolonged piano trill, the recapitulation steals in almost unobtrusively, dolce and pianissimo. Any sense of triumph is held back until the coda, where the main theme sounds fortissimo in the most majestic sonority of the whole movement.

Beethoven was fond of juxtaposing a broad, lyrical opening movement with a witty, laconic, faintly cussed Scherzo – cases in point are the F major ‘Razumovsky’ Quartet, the A major Cello Sonata, Op 69, and the late String Quartet in E flat, Op 127. Like the Scherzo of Op 127, the second movement of the ‘Archduke’ makes humorous play with an elementary rising scale. The initial vision of dry bones (note the bare string textures, in extreme contrast to the sonorous close of the first movement) is later transformed into a relaxed, convivial Ländler. Beethoven is at his most eccentric in the Trio, which against all expectation far exceeds the Scherzo in scale and range. It opens with a groping chromatic fugato in B flat minor (could Beethoven have been intending an ironic commentary on the fugato in the second movement of the contemporary Op 95 Quartet?) and then proceeds incongruously to a splashy salon waltz such as Weber might have written, veering wildly from D flat to E major and finally to B flat. As in many of Beethoven’s middle-period Scherzos, the Trio comes round twice, after a full repeat of the main section; and the eerie chromatic music makes a final appearance in the coda before dissolving into the rising scale with which the movement began.

For the Andante cantabile Beethoven moves to D major, a luminous key in relation to the preceding B flat (shades here of the turn to G major in the first movement). This is one of the rare slow variation movements in Beethoven’s middle-period works, a series of meditations on a hymnlike theme of sublime simplicity that foreshadows the transcendent finales of the piano sonatas Opp 109 and 111. Each of the four variations preserves the structure and broad harmonic outline of the melody against increasingly elaborate figuration. After the intricate, luxuriant keyboard textures of the fourth variation, Beethoven brings back the opening of the theme in its original guise before feinting at distant keys; then, in a long, rapt coda, violin and cello muse tenderly on a cadential phrase like soloists in some transfigured operatic love duet.

In his middle-period works Beethoven often linked the slow movement directly with the finale, delighting in jolting the listener from timeless contemplation to the world of robust action. The dance-like theme of the rondo finale, with its whiff of Viennese café music, is, in fact, subtly adumbrated in the closing bars of the Andante. Beethoven makes witty capital from the theme’s harmonic ambivalence (it starts as if in the ‘wrong’ key of E flat) on each of its returns, while the central ‘developing’ episode irreverently punctuates an expressive new cantabile melody with fragments of the rondo theme. The Presto coda encapsulates the volatile, wayward spirit of the whole movement, changing the metre to 6/8 and transforming the main theme in an outlandish A major before bluntly restoring the home key.

With the little Allegretto in E flat we go back to Beethoven’s final years in Bonn before his move to Vienna in 1792. Though the autograph is lost, the work almost certainly dates from around 1790, when the composer was emerging from obscurity in the Bonn chapel and theatre orchestras and delighting connoisseurs with his keyboard prowess. One of Beethoven’s favourite haunts was the Zehrgarten, a cultural and political club frequented by enlightened aristocrats and intellectuals; and it was for members of this circle that he wrote many of his early ‘domestic’ works, including, we may guess, this guileless Allegretto, cast in the form of a minuet without trio.

In his early Viennese years Beethoven satisfied popular demand for variations on operatic hit tunes with a stream of works involving his own instrument. And though the evidence is not watertight, the variations on the song ‘Ich bin der Schneider Kakadu’ (‘I am Kakadu the tailor’) from Wenzel Müller’s 1794 comic Singspiel Die Schwestern von Prag (‘The sisters from Prague’), probably originated at this time. Two decades later, in 1816, Beethoven wrote to the Leipzig publisher Härtel offering ‘Variations with an introduction and supplement, for piano, violin and cello, on a well-known theme by Müller, one of my earlier compositions, though it is not among the reprehensible ones’. Wenzel’s opera was revived in Vienna in 1814. And this may well have prompted Beethoven to dust down and revise his youthful variations, taking account of the extended compass of the newest pianos and perhaps adding his ‘supplement’ (i.e. coda) plus the exaggeratedly sombre G minor introduction that gradually outlines the ‘Kakadu’ theme. When the naive, Papageno-ish tune emerges in full, in a blithe G major, it is with an absurd sense of anticlimax – the kind of comic deflation Dohnányi emulated a century later in his Variations on a Nursery Theme. The variations broadly follow the traditional pattern by adorning the melody with increasingly brilliant figuration, though No 5, with its spare contrapuntal textures, and No 7, a delicate imitative duo for violin and cello alone, deconstruct rather than merely decorate the theme. After the traditional Adagio variation in the minor key, No 9, full of chromatic pathos (shades here of the slow introduction), and a jolly 6/8 variation, Beethoven launches a long and capricious coda by turning Müller’s ditty into a mock-learned fugato.