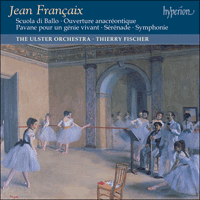 The gentle urbane art of Jean Francaix, at once freshly engaging and invariably distinguished by an unerring sense of style, has endeared itself to successive generations of musicians and music-lovers. His death in 1997 at the age of 85 removed from contemporary music one of its most immediately appealing and distinctly Gallic masters.

This alluring orchestral music undulates between the dreamy and the dramatic, exemplifying Francaix's attractive use of sound colour and harmonies. The Scuola di Ballo, a ballet in one act, is based on music by Boccherini, largely from his quintets. The Pavane pour un Génie vivant was written to mark the fiftieth anniversary of Ravel's death, and the Symphonie was written in Haydn's memory. The Sérénade has neoclassical overtones, and the Ouverture anacréontique attempts to portray an imaginary world, without wars, in which all is well. The content therefore is largely retrospective, but remains charismatically original throughout.

Compelling listening, enthusiastically and empathetically played by the Ulster Orchestra, under Thierry Fischer.

‘Again and again while listening to Thierry Fischer's ebullient performances I smile and wish that I had met Jean Françaix’ (Gramophone)
‘An hour of pure joy’ (BBC Music Magazine)
‘The Ulster Orchestra sound captivated by this music, as well they might … pure pleasure from beginning to end’ (International Record Review)
‘This collection serves to remind us what 20th-century joys can be found away from the fashionable modernists. The Ulster players may not actually be French, but they fooled me. An utter delight’ (The Times)
‘The Ulster Orchestra has acquired a deserved reputation for the strength of its sectional work and the quality of its soloists, both aspects of performance that come to the fore in Françaix … highly recommended’ (Fanfare, USA)
‘Thoroughly entertaining and immensely intelligent’ (The Evening Standard)
‘Thierry Fischer secures some authentically Gallic character from the Ulster Orchestra … wonderful’ (Yorkshire Post)
«Très bien composé, ce nouveau disque témoigne parfaitement des influences et des particularismes de l’art clair et spirituel de Françaix» (Répertoire, France)

The gentle, urbane art of Jean Françaix, at once freshly engaging and invariably distinguished by an unerring sense of style, has endeared itself to successive generations of musicians and music-lovers since the first appearance of his adult scores in 1931-2, although his very earliest work was a solo piano piece, Pour Jacqueline, written in 1918 when Françaix was six years old. His death in 1997, at the age of 85, removed from contemporary music one of its most immediately appealing masters, and the present collection of his larger orchestral music offers another conspectus of the prolific output of this distinctively Gallic artist.

Following a performance of Françaix’ Concertino for Violin and Chamber Orchestra at Baden-Baden in 1954, the eminent German musicologist Heinrich Strobel said that ‘after so much problematic or laboured music, this Concertino was like clear water, rushing from a spring with the grace and spontaneity of all that is natural’.

In this programme of Françaix’ orchestral works we can find an impressive consistency that served him for over fifty years, from his first ballet Scuola di Ballo of 1933 (on music by Boccherini) to the Pavane pour un Génie vivant of 1987, written to mark the fiftieth anniversary of Ravel’s death. If it is thought there may be more than a touch of pastiche in either work, or in the Symphony (composed in Haydn’s memory), this collection demonstrates Françaix’ natural compositional mastery, which at first showed an affinity with the rising neo-classical movement (around 1910 to 1930). In ballet, Stravinsky’s Pulcinella (1920, after Pergolesi) is a prime example, to which should be added Tommasini’s The Good-Humoured Ladies (1917, after Scarlatti) and Respighi’s La Boutique Fantasque (1919, after Rossini). These were created by Diaghilev, and although Françaix’ Scuola di Ballo appeared four years after the impresario’s death, for Colonel de Basil’s Ballets Russes company, it belongs with those ballets in that it is based upon music by Boccherini, with choreography by Leonide Massine.

The work is dated 1933 in Françaix’ list of works, but some references state the ballet first appeared in 1924. If so, it may be that the music was played either directly from Boccherini’s scores, or in a piano reduction. What cannot be denied is that the designs for the later production were by de Beaumont, and the premiere of Françaix’ orchestral version took place in Monte Carlo on 25 April 1933. Sixty years later, Françaix further arranged music from the ballet for a ten-cello ensemble, as Scuola di celli. The 1933 season also saw the company give the premiere of another ballet by Françaix, Beach, an original score (the English title is authentic) but far less successful.

In one act, the music on which Scuola di Ballo is based has been identified as coming mostly from Boccherini’s numerous string quintets, but the pas de deux, Larghetto, is taken from the finale of the Italian’s Sinfonia in B flat for wind instruments. Based on a story by the eighteenth-century Italian dramatist Carlo Goldoni, Massine’s choreography for Scuola di Ballo tells of a commedia dell’arte company preparing for a production, and the rivalry engendered between a talented newcomer, the established prima ballerina and an endearing but bumbling member of the company. The story is inconsequential, but the music is utterly delightful.

Scuola di Ballo was quite successful. In the late 1930s, Antal Dorati conducted selections from the score on 78rpm discs with the London Philharmonic for English Columbia. Another well-known pre-war recording of Françaix’ music was of his Sérénade for small orchestra by the Hamburg Chamber Orchestra under Hans Schmidt-Isserstedt. It is in four movements – Vif; Andantino con moto; Un poco allegretto; Vivace – and can be played by twelve instrumentalists (flute, oboe, clarinet, bassoon, horn, trumpet, trombone and string quintet), as well as with a fuller string strength, as on this recording. The Sérénade, a highly entertaining work of 1934, may appear indebted to Stravinsky at his most neo-classical, but pre-dates the latter’s similar Dumbarton Oaks.

In Françaix’ list of works are three symphonies, but they are not numbered. The first is relatively early, written about the same time as Scuola di Ballo and premiered in Paris in November, 1932. The second symphony (1948) is for strings, a most beautiful work, which was first performed on the BBC Third Programme in 1949. The third of Françaix’ symphonies, in G major and written in memory of Joseph Haydn, is recorded here. It was composed in 1953 for the Musical Arts Orchestra of La Jolla, California, and its American conductor Nikolai Sokoloff (1886-1965), who is often confused with Nikolai Sokolov (1859-1922). The younger man, although born in Kiev, was brought to the USA as a child, where he lived for the rest of his life. He became a noted violinist in the Boston Symphony before assuming conductorship of the Cleveland Orchestra in 1918 for fifteen seasons. After two years with the Seattle Symphony he settled in California, inviting several eminent composers to write for the La Jolla Orchestra, which he conducted. Among them were Martinu (Sinfonietta La Jolla for piano and orchestra, 1950), Norman Dello Joio (New York Profiles, 1949), Milhaud and Jean Françaix, whose Symphonie en sol majeur was premiered in La Jolla on 9 August 1953. Although written for and dedicated to Sokoloff, he was unable to direct the premiere himself, which was conducted by his assistant, Augustus L Searle.

Françaix’ third Symphony is in four movements: Allegretto, Andante, Menuet et Trio, and Final. It cannot avoid comparison with Prokofiev’s ‘Classical’ Symphony, certainly in intent, but such a superficial view will not explain the originality and differences in musical character that lie between these two classically-structured symphonies. Françaix is at his most masterly here; the first movement opens with a simple theme on the strings, amabile, at once taken up by solo violin and flutes, from which we may expect a movement in pasticcio manner. But the tonality and harmony change perspectives and a new theme, flirting with the flat supertonic (!), declares this to be the twentieth century after all. The music proceeds in discursive style until the coda restores, at last, the pleasant G major tonality in which the movement began.

The simply planned slow movement is dominated by a long, beautiful theme on oboe d’amore, accompanied largely by muted strings. The theme is taken up by oboe, clarinet and flute (then, briefly, horn and trumpet), with other woodwind variants before the theme returns, above the rich string texture, to close the movement in a gentle C major. The minuet and trio is ostensibly in F major, but Françaix uses this old dance style merely as a structural ploy, for in many ways this is the most forward-looking movement in the symphony (especially in the Trio), full of delicate colours and subtle rhythmic emphasis. The lively Final is lucidly, but not always predictably, laid out, comprising statement, expanded counterstatement and coda. Texturally, it recollects the first movement, with a notable use of solo violin at important structural junctures. Haydn surely would have approved!

Françaix’ Pavane pour un Génie vivant is the last work to be written on this recording. As mentioned earlier, this homage to Ravel commemorates the fiftieth anniversary of his death. It was written for the Radio France Montpellier Festival of 1987 and carries the subtitle ‘à la mémoire de Maurice Ravel, si présent parmi nous …’. The Pavane was first performed in Pézenas on July 23 of that year by the Philharmonie de Chambre de Pologne. The conductor was Michel Béroff. Scored for two flutes, one oboe, cor anglais, two clarinets, two bassoons and strings, and prefaced with a quotation from Blaise Pascal (‘Le cœur a ses raisons, que la raison ne connait pas’), which epitomises an aspect of Ravel’s creative make-up – that eternally fascinating combination of the fastidious and the passionate. This restrained, evocative piece in 3/4 time makes a brief but finely-wrought epicedium to the master.