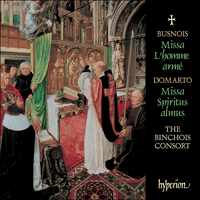 The French composer, singer and poet Busnois was widely acknowledged as one of the most outstanding composers of his time, and his Missa L'homme armé (circa 1460) was one of the most revered works of the later fifteenth century. Origins of the famous tune on which it is based are somewhat unclear, but many believe it was composed by Busnois himself. His was definitely one of the first (if not the first) Masses to be composed on this tune, and another 40 or so were written subsequently by various composers of various nationalities. In fact, many of Busnois' works inspired emulations, and the other two works on this disc by him are equally mesmerising and exhilarating.

The Franco-Flemish composer Domarto also enjoyed considerable international repute in the mid-to-late fifteenth century, largely due to the popularity of the work by him presented on this disc.

We have therefore, together with Jean Pullois’ inspiring motet Flos de spina, a disc of some of the most important choral works from the fifteenth century, expertly and beautifully performed by one of the country’s leading exponents in this field, namely the Gramophone award-winning Binchois Consort.

‘This is musicianship of a very high order, transcending specialisms’ (Gramophone)
‘The challenges of this brilliant work are well handled by The Binchois Consort’ (BBC Music Magazine)
‘Richly eloquent, superbly sung performances’ (The Independent)
‘This is clearly an ensemble of singers who have a deep understanding and affinity for this repertoire … their performances are highly polished and precise … this recording is clearly a must’ (American Record Guide)
‘An important and rewarding release’ (International Record Review)
‘The performance is a triumph’ (Fanfare, USA)
‘It would be difficult to imagine a better introduction to [Busnois's] sacred music … the performance is absolutely outstanding, as are those throughout the disc, perfectly tuned and finding the singers responding to every nuance of this marvellous work’ (Goldberg)

Busnois’s Missa L’homme armé was one of the most revered works of the later fifteenth century. Dufay, Basiron and Faugues all apparently quote from it in their own Masses based on the tune, and two composers—Obrecht, in his Missa L’homme armé, and the anonymous composer of a Missa de Sancto Johanne Baptista—even adopt the entire rhythmic organization of Busnois’s setting of the melody as the structural underpinning of their own Masses. Its status is confirmed by its survival today in no fewer than seven manuscripts, an unequalled number for the time of its composition (probably the 1460s); and whether or not, as some have claimed, it was the earliest Mass composed on the famous tune, there is no question but that Busnois’s was the most influential and authoritative of the series, a conclusion reinforced by the suggestion of two later theorists that he may even have composed the model song.

The popularity of the L’homme armé Mass seems to have been very much of a piece with its composer’s reputation among his contemporaries more generally. Johannes Tinctoris, the greatest music theorist of the day, dedicated one of his treatises jointly to Busnois and Ockeghem, and elsewhere praises Busnois as among the finest composers whose music he has heard. His literary reputation is affirmed by Tinctoris’s extolling of his skill in Latin, and by the composition by the great poet Jean Molinet of a poem dedicated to him, a compliment the composer returned. And the Mass on this disc is far from the only work by Busnois to have spawned emulations: a plethora of songs and Masses of the period use his songs as models.

Busnois’s music also reveals him, to a degree unique for his time, as a vivid personality. It seems clear that self-expression was his intention: two of his motets refer to him directly, while one of them, a motet to his patron saint, St Anthony Abbot, enshrines his name in an acrostic. Less favourably, but perhaps equally revealing of a strong personality, is the now famous episode in his early career when he beat up a priest and had others beat him up—not once, but on five separate occasions—to the point of drawing blood. But it is from the music itself that his voice seems to shout out most powerfully, as listeners to the Mass on this disc will quickly recognize.

While not all musical tastes could span half a millennium, no one who knows the Missa L’homme armé will have any difficulty understanding its status in the eyes of its composer’s contemporaries. First of all, it is beyond doubt one of the most mesmerizing and exhilarating pieces of the fifteenth century. Legendary for the virtuoso idiom of his sacred works, Busnois is nowhere more pyrotechnic than here: it would have been fascinating to hear how the original singers of this work—its composer most likely included—would have approached such gestures as the famous bass surge through a tenth up to top F in the second part of the Gloria, and their even more challenging (at least to modern voices) climb up to top G in the previous section. This is music that not only bespeaks confidence: it demands it, in ample measure, from its performers.

But there is much more here than just gymnastics: Busnois has (to modern sensibilities anyway) an uncanny sense of timing, with everything seeming to fall felicitously, suavely sculpted components building into a masterly overall design. Thus points of repose are just as absorbing as points of tension, the brilliant pacing and manipulation of rhythm, pitch and counterpoint seeming to draw the listener irresistibly onward. Everything seems calculated to entice the ear into Busnois’s often subtle and nuanced soundworld, and to listen intently to the gracefully arching and gently climaxing melodic lines in such reduced-voice passages as the ‘Christe’ section of the Kyrie is to receive an impression of real feeling and sincerity of utterance.

The same almost mesmerizing brilliance is so striking in the Marian motet Gaude celestis domina, that, even had it not been identified by Rob Wegman from a quotation in Tinctoris, hearers familiar with Busnois’s other works would have immediately suspected his hand here also. The driving and often highly syncopated rhythms, energetic passages in tenths, and thrilling metrical and rhythmic shifts of gear immediately call to mind the similar idiom of In hydraulis and Incomprehensibilia firme (the latter recorded by the Binchois Consort on A Marriage of England and Burgundy, CDA67129).

Compared to the Mass and Gaude celestis domina, the Marian motet Anima mea liquefacta est comes as a stylistic surprise. Though exhibiting similarly long, pliable melodic lines and concluding with a driving, syncopated passage that relates its style to parts of Busnois’s other works on this disc, this piece presents its composer in a rather different, and much more introspective, light. Its darker sonorities, combination of low voices, polytextuality (its tenor sings the text of the scaffold chant, the Marian responsory Stirps Jesse), and Song of Songs text relate the piece, as Paula Higgins has shown, to an early fifteenth-century repertoire, and a number of scholars have suggested that it may occupy an early position in its composer’s output. Its sombre tone gives Anima mea a lamenting, plangent quality, and has led Higgins to hypothesize that the piece may have been associated with a royal death. Whatever occasioned its composition, though, this is a deeply felt and moving work, and, unusual though it is in the context of Busnois’s other works, it is similarly expressive of an emotional temperament.

Even such an individual voice as that of Busnois did not emerge from nowhere, however: one of his more signal influences, as outlined in an article by Rob Wegman which described it fully for the first time, was the other Mass on this disc, the Missa Spiritus almus by Petrus de Domarto. Hardly a household name today, Domarto—as again attested by Tinctoris—was a figure of considerable repute in the mid-late fifteenth century. His approach to metre and, particularly, cantus firmus layout, may have instigated a trend which also embraced one and perhaps two Masses by his apparently younger contemporary: the Missa O crux lignum and (if it is, as Wegman has argued, by Busnois) the Missa L’ardant desir. All three of these Masses share the characteristic of basing each section on a tune in the same written form, which, under the aegis of different mensuration signs (the counterpart to modern time signatures) assumes different rhythmic shapes in performance. In the case of the Domarto Mass, that tune is the melismatic phrase—set to the words ‘Spiritus almus’ (‘nourishing spirit’)—that concludes the Marian responsory Stirps Jesse (see the text later in this booklet) which also forms the basis of Anima mea liquefacta est. The allusion in the text is to the tree of Jesse: the ‘family tree’, familiar from depictions in stained-glass windows, linking Jesse, the father of David, with the Virgin and Christ.

Yet here the relationship between the two composers ends: although little more than a decade may separate the Domarto Mass—probably composed around 1450 or slightly earlier—from that by Busnois, the aural impression is radically different. The contrapuntal sparring of the later work, tightly woven from energetic melodic lines, constantly shifting rhythmic patterns and intricate motivic interplay, are contrasted here with a stratified texture frequently pitting slowly moving lower parts against busier upper ones, a generally low tessitura, short-breathed rhythmic and melodic ideas and motivic interplay restricted chiefly to the exchange of brief motifs between the top two voices. To modern ears, accustomed to more obvious ‘hook’ this is a harder nut to crack. But after a few hearings it will start to dawn on the attentive listener (as to singers preparing it for performance) that the idiom here is just as absorbing. Shifts of texture—full and sedate to reduced and more active—shape the larger contours, while playful interactions between the upper voices and artful interjections from the bass drape the scaffolding tune with a tissue of great—if, compared with the Busnois, more local—interest and finesse. If the structure of this work influenced the Mass-writing of Busnois and Obrecht, its general idiom, as Reinhard Strohm pointed out, is closer to that of English cycles such as the anonymous Missa Caput and particularly, as Wegman outlined, to Ockeghem’s presumably early Mass on the same melody.

Like Domarto, Jean Pullois spent part of his career at the Church of Our Lady in Antwerp, where his colleagues included Ockeghem, who was apparently a close friend. Although freer in its rhythmic idiom than the Missa Spiritus almus, the dark sonorities and short-breathed melodic idiom confirm Flos de spina as a work of similar vintage. To judge by its circulation in the manuscripts, this motet was greatly admired by its contemporaries, and listeners will quickly perceive why: it would be hard to think of a more ravishingly beautiful work from the mid-fifteenth century, nor of a more fitting climax for this programme. It is as if its composer has squeezed every ounce of his creative eloquence into this imploration to the Virgin Mary, the supreme intercessor and greatest hope, to fifteenth-century mortals, for eternal salvation.