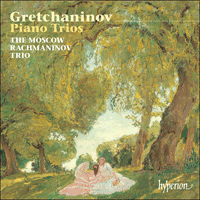 Hyperion welcomes The Moscow Rachmaninov Trio back for another recording of gorgeous Russian Romantic chamber music.

Aleksandr Grechaninov is more widely known for his liturgical music and songs, and his works in other genres were rarely performed until recently. His chamber music in particular is wholly undeserving of the neglect which has befallen it. There are ten major pieces of chamber music by Grechaninov: four string quartets, two clarinet sonatas, a violin sonata and the three works presented here. These lesser-known works reveal that his wide-ranging and creative artistry rival that of his better-known compatriot composers more commonly represented on disc and in the concert hall. These intoxicating discoveries should increase both Grechaninov's and The Moscow Rachmaninov Trio's deserved prominence.

Pour a glass of wine, put the feet up and enjoy!

‘Such an innocent exuberance as well as an amiable lyrical impulse that it is hard not to find the music easy on the ear, especially in such infectious performances—splendidly energetic, and excellently recorded’ (Gramophone)
‘The Moscow Rachmaninov Trio make a convincing argument for this overlooked repertoire’ (The Observer)
‘The committed, forceful playing of the Moscow players makes a strong case for Grechaninov’ (The Independent)
‘Spirited, joyous, and brilliantly played’ (American Record Guide)
‘Strongly recommended’ (Fanfare, USA)
‘Lovely and fresh-sounding tonal works full of emotional tune-spinning’ (Audiophile)

Until quite recently, a mention of Aleksandr Grechaninov’s name to most music-lovers would have identified a Russian composer of liturgical music and songs, in the former case due to the enormous success of two single HMV 78rpm discs of extracts from two of his four settings of the Liturgy of St John Chrysostom, recordings which remained in the catalogues for decades.

Grechaninov’s works in other genres were very rarely performed, as indeed is largely the case today, but recordings of his little-known compositions have lately begun to appear, mostly from Russia, which reveal him to have been a more wide-ranging creative artist than was generally understood.

He was born in Moscow on 25 October 1864. His family’s circumstances were relatively modest, but after joining school and local church choirs Grechaninov’s latent musical talent was stimulated, and, further encouraged by his older brother’s wife, he took piano lessons. His progress was such that he joined the piano class at the Moscow Conservatory of Nikolai Kashkin, an intimate of Tchaikovsky who later became a noted critic. Grechaninov’s advancement there led him to study further with Safonov (who became the Conservatory’s director in 1889) and composition with Arensky and Taneyev. After ten years at the Conservatory, Grechaninov moved to St Petersburg where, for a further twelve years (until 1903), he took lessons from Rimsky-Korsakov, although during that time he had begun to make a name for himself as a composer.

Among Grechaninov’s earlier works are three orchestral pieces: a Concert Overture, the Elegy in Memory of Tchaikovsky and the Symphony No 1. The last two were premiered by Rimsky-Korsakov after which Grechaninov became a professor of composition in Moscow. His experience as a boy chorister eventually led to the first of his important liturgical works in 1898, by when his instrumental and operatic music, it is claimed, began to exhibit Franco-Impressionistic influences. Yet such influences were merely incidental: Grechaninov never lost his intensely Russian musical roots, even after the 1917 Revolution, which changed his life—as also it did for every Russian—for ever.

For eight years, until 1918, Grechaninov enjoyed an annual state pension; following the Revolution this was withdrawn. He was not alone, of course, but his growing disenchantment with the Bolshevik government and the ensuing social upheaval led him to emigrate to Paris and, later, following the outbreak of World War II, the United States.

Grechaninov became an American citizen in July 1946, and died in New York in January 1956 at the age of ninety-one. His output had barely slackened, and he left two hundred and one works with opus numbers. Well into old age, he made a series of fine recordings of the best of his songs for RCA, accompanying Maria Kurenko, and although his last two symphonies (Nos 4 and 5) were premiered in New York and Philadelphia respectively, his sacred music has remained the best-known part of his output. This is an incomplete basis on which to evaluate Grechaninov’s art; his chamber music manifestly does not deserve the neglect which has befallen it. There are ten major pieces of chamber music by Grechaninov: four string quartets, two clarinet sonatas, a violin sonata and the three works on this recording.

The piano trios and Cello Sonata exhibit, in varying degrees, something of his subtlety and individual approach to compositions in sonata structure. He has a tendency, perhaps derived in part from Chopin, of beginning the second subject and even the development, in the home key, before moving away, often to quite remote tonal regions. Another aspect we can identify is that Grechaninov, in each of these three works, avoids writing a rondo finale: the concluding movements are all in sonata form.

The Piano Trio No 1 in C minor, Op 38, dedicated to Taneyev and dating from 1906, is as we might expect the most overtly ‘Russian’, not to say Tchaikovskian, of these three works. The first movement Allegro passionato is firmly in traditional sonata form. Thus it is that the first subject of the opening movement has an urgent character and the contrasting second subject is in the usual relative major key of E flat major; the development section moves to the remote key of C flat major which involves a thorough working of the material before C minor returns.

A simple transition, via B flat, opens the second movement, Lento assai, which is actually in A flat major (another falling second) as the beautiful violin theme at once establishes. After much elaboration, the music then falls to D flat major, before briefly retracing its steps. The finale, Allegro e vivace, firmly returns to C minor, and here the influence of Rachmaninov is most apparent, particularly the finale of his second Piano Concerto, which is almost directly quoted at several points. The work ends in a fiery mood.

The Cello Sonata in E minor, Op 113, was completed in 1927 in Paris. Although ostensibly in three movements, it can better be considered as a four-movement work without a first movement. The sonata begins, therefore, with a slow movement, in moderate tempo, which cannot properly decide if it is in E major or E minor, for both keys tend to jostle for position, although the minor mode predominates. The second movement, unusually termed Menuetto tragico, has a violent introduction which lands on the key at the polar opposite to E minor—B flat major. Into this unusual juxtaposition comes the minuet itself, music which exhibits an underlying nervousness of character, until a brief reminiscence of the opening violence plunges us headlong into the finale. A cello cadenza lands on the dominant of E major, and at once the longest movement in the work (as if to compensate for there being no sonata first movement as such) is under way. Once more, it is E minor which tends to dominate this robust work, and we can appreciate the composer’s sleight-of-hand wherein he begins the development as if it were a false recapitulation. There is much to applaud here.

Three years later, in 1930, also in Paris, Grechaninov composed the Piano Trio No 2 in G major, Op 128. As can be seen, this is a much shorter work than its predecessor, yet it carries the modal uncertainty of the Cello Sonata further. The first subject, which begins at once, is basically in G major, but ends in the minor; the second subject actually begins in G major before moving to D major (the ‘traditional’ second-subject key), but as the music progresses it is G minor which exerts a strong influence. The second movement Intermezzo is in E flat major, but Grechaninov it seems cannot resist the pull of G minor from the first movement—which comes to infect the more rhythmic central section. The finale is less obviously in sonata form, for there is no second subject as such, more a secondary group of fragments. The movement is in attractive compound time, as a moto perpetuo, but the G major opening is—as, by now, we might expect—soon deserted for developmental treatment on the flat side of the home key, returning intermittently to G major wherein the work ends in breathless excitement.