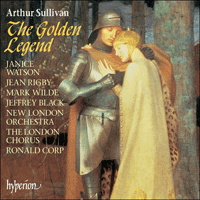 During the Victorian era The Golden Legend was second only to Handel's Messiah in popularity and is regarded by Sullivan experts as his finest concert work. Never before recorded in its entirety, Hyperion and Ronald Corp, with support from the Sir Arthur Sullivan Society and The D'Oyly Carte Charitable Trust, have resurrected this masterpiece.

During the summer of 1886 following on from the huge success that was The Mikado, Sullivan hid himself away in a cottage in Yorktown and composed a secular cantata that Gilbert was to recognise as "the biggest thing you've done". Scenes following the premiere at the Leeds Festival on October 15th transcended any known before, with the audience on its feet waving programmes and hats, climbing on chairs and hurling flowers. The choir had formed an opinion of its own of the work at rehearsal, and had accumulated bouquets under their chairs to launch at the composer.

Hailed by Stanford as deserving of a place "on the shelves of the classics", Hyperion is therefore proud to participate in the revival of a work of such enormity, removing The Golden Legend's overwhelming popularity from the archives and placing it righfully in the present.

‘A welcome opportunity to reassess the worth of Victorian England’s favourite musician. The superb performance conductor Ron Corp draws from his New London Orchestra and Chorus, and a fine group of soloists’ (The Mail on Sunday)
‘A Victorian favourite impressively revived. Ronald Corp is a persuasive advocate, drawing alert playing and singing from the chorus and orchestra with which he works regularly. How welcome it is now to be able to hear and judge the piece afresh on CD with full warm sound’ (Gramophone)
‘A vivid and melodious score worthy to stand among Sullivan's finest works … the duet between hero and heroine on their wedding day is outstanding … under Ronald Corp’s careful direction, his well-disciplined choir and orchestra give a good account of this rarity … Janice Watson is in radiant voice as Elsie, Jean Rigby rich-toned as her mother, and Mark Wilde confident as the Prince’ (BBC Music Magazine)
‘In its heyday, Sullivan’s Golden Legend would have been near the top of any league-table of most frequently heard major choral works. To judge from this excellently performed and welcome revival, its popularity was fully justified. With Sullivan’s melodic gifts still clearly evident, it shows a thorough grasp of dramatic construction and imaginative word-setting, which in some ways looks forward to Elgar. So, too, does the masterly handling of the orchestra, which functions almost as an extra participant in the drama and creates thrilling effects’ (The Daily Telegraph)
‘An issue for serious Victoriana fans who will savour the quality of the cast, with Watson, Rigby and particularly Wilde, who are all excellent’ (Classic FM Magazine)
‘Corp and his excellent singers deliver this first-ever recording with enthusiasm and style … a piece no Sullivanite should miss’ (HMV Choice)
‘A triumph … a true masterpiece … a mandatory purchase’ (Varsity)

Arthur Sullivan (1842-1900) is probably the most widely-known of all nineteenth-century British composers. From humble beginnings in Lambeth, the son of an Irish clarinettist and military bandmaster, he rose to become the friend of princes, a fêted social celebrity, and the country’s most famous composer.

Sullivan owed much to the hugely successful series of operettas written in collaboration with the author W S Gilbert. What began as a diverting sideline with Cox and Box (1866) led to the development of a distinctly British style of operetta. The works of the 1870s, including HMS Pinafore and The Pirates of Penzance, laid the foundations for the triumphs that made London in the 1880s the centre of the operetta world. Patience, Iolanthe, The Mikado and The Yeomen of the Guard were all produced in the decade that culminated with The Gondoliers. Thereafter, occasionally variable inspiration and the growing popularity of musical comedy led to declining fortunes for Sullivan and for British operetta.

But Sullivan’s success did not rest solely on operetta. As the first holder of the Mendelssohn Scholarship he progressed from the Royal Academy of Music to the Leipzig Conservatoire, causing a sensation on his return with his brilliant score for The Tempest (1861). He quickly established a reputation with choral works, songs, the Irish Symphony, a cello concerto and other orchestral and theatre music. As operetta came to dominate Sullivan’s creative life, his ‘serious’ output diminished. Nonetheless, two major works came relatively late: the cantata The Golden Legend (1886) and a grand opera Ivanhoe (1891). Outside composition, Sullivan’s range of influence was enormous. He conducted the Leeds Festival and the Philharmonic Society, he edited operas for Boosey, and was a key figure in such diverse projects as the National Training School for Music (forerunner of the Royal College of Music) and the National Brass Band Festival. When he died in 1900 he was buried in St Paul’s Cathedral and the nation mourned its most celebrated musician.

Very soon the almost inevitable reaction began to set in, resulting in a virtually total neglect of Sullivan’s concert music – a fate shared with so much British music of the period. Few works can have experienced the pendulum of fortune swing as quickly as The Golden Legend. When first heard at the 1886 Leeds Festival the reception was overwhelming, and during the remaining years of the composer’s life it was so frequently produced that only Messiah was performed more often in Britain. It even overtook Elijah in popularity. But when the fall from favour came, the silence of The Golden Legend was almost total. By the mid twentieth century, the work was no more than a name in the history books. Only the unaccompanied chorus ‘O gladsome Light’ lingered in the repertoire as a church anthem. But changing attitudes and a more enlightened insight into the period are leading to a rediscovery of the richness of Victorian art. The wind of change is blowing the dust from a wealth of music, including The Golden Legend and Sullivan’s other non-Gilbert output that is again – thanks in no small part to the Sir Arthur Sullivan Society – being performed and widely enjoyed.

Before writing The Golden Legend, Sullivan had gained a good deal of experience and success as a choral composer. For although it was essentially an orchestral work, The Tempest, that marked him out as the bright white hope of British music, the market for new large-scale concert works lay mainly in the field of choral music to meet the demands of the countless amateur choirs. The young Sullivan soon turned his talents in that direction with compositions such as the short, attractive and picturesque cantatas Kenilworth (1864) and On Shore and Sea (1871), as well as the sacred oratorios The Prodigal Son (1869) and The Light of the World (1873). All were well received and The Light of the World in particular was highly regarded (Gounod considered it a work of genius) and much performed during the composer’s lifetime. However, none of these choral works broke significant fresh ground or spoke with a particularly individual voice. With The Martyr of Antioch (1880), however, a more dramatic approach – strengthened by Gilbert’s skillful adaptation of Milman’s poem (his only non-operatic collaboration with Sullivan) – produced a work with a more distinctive edge.

Sullivan composed The Martyr of Antioch for the Leeds Triennial Festival of 1880. It was his first year as festival conductor, in succession to the ageing Michael Costa. For his third festival in 1886, Sullivan promised a new cantata and enlisted the help of his friend, the music critic Joseph Bennett, to abridge and adapt Longfellow’s narrative poem, The Golden Legend, for the purpose. The poem’s sheer length meant that many events and episodes were inevitably omitted. The problems of abridgement notwithstanding, however, Bennett’s text, although focusing effectively on the poem’s more Gothic elements, does not present a continuous narrative thread – ‘Scenes from The Golden Legend’ would describe it more accurately. Neither does it realise the dramatic potential of every situation actually included – cutting short the action at the point when Prince Henry and the Attendants burst in upon Lucifer to rescue Elsie (Scene 4) is the most glaring case in point. However, it should be borne in mind that listeners were expected to read the ‘argument’ – or synopsis – commonly provided for such works and, of course, Longfellow’s much-read poem would have been familiar to many – so leaving gaps in the story was not perceived as a problem.

1886 was a hectic year for Sullivan, but in between conducting Philharmonic Society concerts, hosting Franz Liszt around London and composing Ruddigore, the score of The Golden Legend was completed between April and August. Some of the most celebrated soloists of the day, including Albani and Edward Lloyd, were engaged for the premiere at Leeds Town Hall on 16 October. Expectations were high and were not disappointed. The performance was a triumph. Sullivan had certainly pulled out all the stops with The Golden Legend. Most of all he had wanted to demonstrate that, as a ‘serious’ composer, he remained a force to be reckoned with. Undoubtedly in this work he consciously set out to explore more progressive technical horizons. That this has led to some unfavourable comparisons within the wider European context, should no longer hinder proper appreciation of the work’s qualities and significance. The British Choral Tradition is a hugely important force that is not always appropriately measured against the scale of values reflecting primarily Germanic priorities that still defines a common view of all Western musical history and development. The line of major works written for British choirs, or fostered by them, stretches from Messiah to The Creation, to Elijah, to The Dream of Gerontius – and beyond. En route between Elijah and Gerontius, The Golden Legend is an important milestone. By expanding the dramatic, narrative, almost operatic approach of Elijah and increasing the role of the orchestra following Berlioz’s lead in The Damnation of Faust, Sullivan lit the way for Elgar. King Olaf, Caractacus and Gerontius owe much to The Golden Legend – as, via them, does Walton’s Belshazzar’s Feast. Elgar certainly admired The Golden Legend and its influence went much deeper than individual details (such as the striking similarity between the opening solo tenor phrase in The Legend and Gerontius) helping to mould his whole approach to the composition of large-scale choral music.

Curiously, for a work written for a major choral festival and which remained such a favourite with amateur choirs, The Golden Legend does not make extensive use of the chorus. The writing in the Prologue is imaginative and very effective but if some of the choral writing elsewhere is conventional by the standards of the day it is always apposite and eminently singable. (Sullivan knew what his choristers enjoyed and did well!) Throughout the work the solo writing is consistently strong. Scene III, in particular, is superb and Prince Henry and Elsie’s final duet in Scene VI has a yearning romantic intensity that would not be out of place in a Tchaikovsky opera. Most of all, though, it is the brilliant scoring for large orchestra that sets The Golden Legend apart and shows us a great composer in full and perfect command of his art.