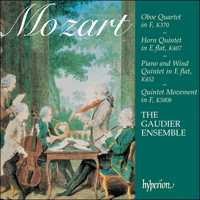 Mozart's contribution to the repertoire of music with wind instruments is of considerable significance. Not only did he write concertos for flute, oboe, clarinet, bassoon and horn, but he also made frequent use of these instruments in his chamber music. His interest in varied textures and colours led to unusual, sometimes unique, combinations of wind or wind and strings, and many of these works have become cornerstones of the repertoire.

This historically significant disc includes a single movement from a quintet never completed by Mozart before his death. It was one of only a handful of works singled out for by his wife Constanze for particular attention, whilst documenting his other fragments. The Horn Quintet was written for Joseph Leutgeb, a long-standing friend for whom Mozart also composed the four horn concertos, and shows an obvious affection for the instrument and its practitioner. The Quartet, K370, contains a particularly lovely Adagio, only 37 bars long, but deeply expressive, and the final work here, K452 was considered by the composer himself to be the best work he had produced.

These important works could not be in more talented hands than those of The Gaudier Ensemble, who effervesce outstanding playing throughout in performances that Mozart himself would surely have been proud of. A disc to be relished with the CD player firmly on 'continuous play'!

‘Ravishingly delightful’ (American Record Guide)
‘Anyone interested in this particular program is unlikely to be anything but delighted with this disc’ (Fanfare, USA)

Mozart’s contribution to the repertoire of music with wind instruments is of considerable significance. Not only did he write concertos for flute, oboe, clarinet, bassoon and horn, but he also made frequent use of these instruments in his chamber music. His interest in varied textures and colours led to unusual, sometimes unique, combinations of wind or wind and strings, and many of these works have become cornerstones of the repertoire.

The Quartet for oboe, violin, viola and cello, K370, dates from early 1781, when Mozart was staying in Munich to complete his opera Idomeneo and to be present at its first performances. The opera had occupied much of his time over the winter months and as a consequence he only composed a small number of other works during this period.

K370 was written for Friedrich Ramm, principal oboist in the Elector of Bavaria’s orchestra and an outstanding instrumentalist, renowned for the beauty and variety of his tone and the expressiveness of his playing. These qualities enabled Mozart to compose a work which, while giving due prominence to the oboe, avoids mere display and encompasses a wide range of feeling. This is particularly noticeable in the Adagio, an aria-like movement in D minor, only 37 bars long but deeply expressive. The Rondo finale contains a remarkable passage of thirteen bars where the oboe plays in 44 time against the continued 68 accompaniment. The tension created by this rhythmic conflict combined with the minor mode is relieved only when the tonic major key and compound time return together in the middle of a semiquaver passage for the oboe. The final section of the Rondo makes full use of the instrument’s higher range and the work ends in cheerful mood.

After the successful reception of Idomeneo Mozart left Munich for Vienna, where he arrived on 16 March 1781 and where he was to spend the last decade of his life. In the summer of 1781, having left the service of the Archbishop of Salzburg, Mozart began the life of a freelance musician and by the end of that year had established his reputation as the finest keyboard player in Vienna. The following few years proved successful—his works were performed regularly, he was in demand as a teacher and was idolized as both composer and pianist by the Viennese public.

It was during this period that he composed the Quintet in E flat major for piano, oboe, clarinet, horn and bassoon, K452. Dated 30 March 1784 by the composer, it was given its first performance on 1 April at the Burgtheater with Mozart himself at the piano. Some days later he wrote to his father about this benefit concert, commenting on the beauty of the performance and saying he considered the Quintet the best work he had produced.

Despite this opinion, K452 is in fact Mozart’s only quintet with piano, and the combination of instruments used is itself unusual. Single wind, as opposed to pairs, pose problems of blend so he explores the numerous different permutations of instruments to produce different sonorities, and uses short phrases and motifs for variety. No instrument is given preferential treatment and, despite occasional concertante-type passages, the basic chamber-music character is maintained.

Of the three movements, the first has fewest bars and comprises an expressive Largo introduction which leads into the happy Allegro moderato. The opening bars of the B flat major Larghetto are very reminiscent of the middle section of Leporello’s ‘catalogue’ aria from Don Giovanni, and there are some particularly beautiful moments later when the different groupings of the wind are accompanied by arpeggio patterns on the piano. The finale is a rondo with, near the end, a written-out cadenza for all five instruments.

Mozart had set himself a difficult task in writing for the combination of oboe, clarinet, horn, bassoon and piano—that he succeeded is without question. The achievement was recognized by Beethoven who admired the work and, in 1796–7, wrote his opus 16 for the same forces.<.p>

If K452 uses an uncommon group of instruments then the Horn Quintet, K407, is also somewhat unconventional in its scoring for horn, violin, two violas and cello. Mozart may have felt the balance worked better with more lower strings, and it is acknowledged that his string quintets with two violas are among his greatest works. It is also known that the viola was his favourite stringed instrument and the one he chose when playing quartets himself.

As with the Oboe Quartet, it seems that Mozart had a particular player in mind for K407: in this case Joseph Leutgeb, a long-standing friend of the composer and the butt of some of his jokes. In 1777 Leutgeb had moved to Vienna where he carried on his wife’s family’s business as a cheesemonger, combining it with his musical career. He is understood to have retired from playing in 1792, eventually dying in 1811. In addition to K407 Mozart also composed the four horn concertos for Leutgeb and, as in the works for Ramm, the music indicates the artistry of the player concerned. The writing for horn often combines a certain humour with an obvious affection for the instrument and its practitioner. This is evident in the Quintet: the gentle, almost Romantic Andante has some real chamber-music writing and is flanked by lighter-hearted movements in a more concertante style.

The Horn Quintet probably dates from late in 1782, a happy year for Mozart which, in the summer, saw the successful premiere of his opera Die Entführung aus dem Serail and, a few weeks later, his wedding to Constanze Weber.

After less than a decade of marriage Constanze Mozart was to become a widow. When her husband died in 1791 he left behind not only many completed works, but also a number of fragments, pieces set aside for whatever reason and never finished. A list of these was sent by Constanze to the Leipzig publishers Breitkopf und Härtel in 1800 with the aim of further enhancing her late husband’s reputation and protecting it against others who might try to claim the fragments as their own work. Many of these incomplete pieces eventually found their way to the Mozarteum in Salzburg but others, including the Quintet movement in F major, K580b (Anh 90), ended up in the Deutsche Staatsbibliothek in Berlin. This quintet is one of a small number of the fragments on Constanze’s original 1800 list to be singled out by her for special mention.

Marked Allegro, the movement, probably dates from the 1780s and is a lively and attractive movement scored for clarinet in C, basset horn, violin, viola and cello—another unusual combination of instruments. The clarinet in C is often chosen by Mozart when the key of a work is C major or F major (which here suits the basset horn), but it also has a different tone from other clarinets so instrumental colour may well have played a part in the choice. The basset horn appears not infrequently in Mozart’s music. However, it was subsequently used only rarely by composers until its revival by Richard Strauss in the first half of the twentieth century. Despite its novelty, the combination used in this quintet is a winning one and it seems quite possible that Mozart merely put the piece aside temporarily with the intention of returning to it at a later date.

The 102 bars sketched by Mozart comprise a sonata exposition, marked to be repeated. For the most part, Mozart has written a complete score, but there are a few sections where only the principal voices are indicated. The Gaudier Ensemble here performs the movement in a completion by Duncan Druce, who has added the missing subsidiary parts in the exposition, and provided a continuation—development, recapitulation and coda—using Mozart’s themes.