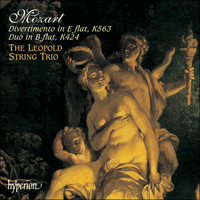 Both works presented on this disc conform readily to an early aesthetic theory of the term 'Divertimenti', that music is a language of the emotions. In K563 Mozart adopts the light, engaging divertimento manner as a starting point for all six movements, but in each case introduces surprise elements that have the effect of enriching and deepening the music. This is not a 'light' work by any means, but an intensely passionate 'tour de force'.

K424 for violin and viola is both lively and lyrical, and the wide variety of melodic ideas, elaborate contrapuntal exchanges and ambitious technical demands are especially appealing. From the outset the considerable poise and virtuosity of the supremely talented players of The Leopold String Trio engage the listener in a soundworld of rich textures, elegant melodic lines, pastoral interludes and brilliant concerto-style passagework.

‘Now eclipses Grumiaux as my top recommendation in both works’ (BBC Music Magazine)
‘Right from the opening chords one is in no doubt that this is going to be a powerful, rich-toned reading of what must surely be the longest, as well as one of the greatest, of Mozart’s chamber works. And so it proves’ (International Record Review)
‘One of Mozart's most carefree yet paradoxically profound healing masterpieces, played with skill and love … the most glowing and perceptive account since the Grumiaux's, and deserves to win friends for this wonderful music among a younger generation of music-lovers’ (The Sunday Times)
‘This is a wonderful recording … as good a performance of both splendid works as you are likely to encounter for a long time’ (Fanfare, USA)

The title ‘Divertimento’ was extremely common in eighteenth-century Austria. At first sight the ideal it implies, of music as an elegant diversion to while away what would otherwise be a tedious hour, seems rather a climb-down from earlier aesthetic theories—of music as a language of the emotions, or of music as the most perceptible echo on earth of heavenly harmony—but Mozart, along with Joseph Haydn, demonstrated time and again that music as entertainment can go along with the most original, enlightening, even profound ideas. Whereas Haydn, in his younger years at any rate, used the title Divertimento fairly indiscriminately—a string quartet or a keyboard sonata is quite likely to be so described—Mozart tended to use it either for music for wind ensemble, or for chamber works in the extended six-movement form of the K563 String Trio. Both works on this CD, however, along with much of Mozart’s chamber music, belong firmly in the Austrian divertimento tradition—music that entertains through a lively interplay of ideas, melodic distinctiveness and an element of instrumental virtuosity. And they both reflect crucial phases of the composer’s life.

Mozart had married Constanze Weber in August 1782, against his father’s wishes; the couple’s visit to Salzburg between July and October 1783, intended to repair this breach by introducing Constanze to his father and sister, had been postponed several times, by a busy musical season in Vienna, by Constanze’s pregnancy and by Wolfgang’s fear of being arrested by the Archbishop of Salzburg, who had never formally dismissed him. Michael Haydn, Joseph’s younger brother, employed at Salzburg since 1762, had taken over Wolfgang’s post as Cathedral Organist the previous year. According to a story published in an 1808 biographical sketch of Michael Haydn, Mozart composed his two duos (K423 and K424) in order to complete a set of six, requested from Haydn by the Archbishop which, owing to illness, he’d been unable to finish. The anecdote is a plausible one; the keys of Mozart’s two duos and the four by Haydn make up a scheme of six different major tonalities, and a glowing 1795 review of an edition of six sonatas by Michael Haydn for violin and viola particularly praises the Mozartean qualities of one of them which, from the way it is described, could be K423 (unfortunately, no copy of the edition has survived). And Mozart asked his father, in December 1783, to send his ‘violin duets’ to him in Vienna, so it seems likely they were composed in Salzburg.

The Mozart and Haydn duos are of similar length and scope, but there are significant differences—Michael Haydn’s melodic style has an old-world formality, in contrast with Mozart’s up-to-date 1780s idiom, bolder and more Italianate, with greater melodic freedom. And Mozart is far more ambitious in the technical demands he makes of his players. This applies especially to the viola; though the violin remains the leading voice overall, the two instruments are, with Mozart, treated more nearly equally, with the viola involved in elaborate contrapuntal exchanges, expected to be unfazed by complicated double stopping, and given what was, in the eighteenth century, an extended range of nearly three octaves.

The first ‘Allegro’ of K424 is preceded by a magnificent slow introduction, based on a motif that Mozart was to re-use four years later in the slow movement of the G minor String Quintet (K516). The main part of the movement is one of a long series of triple-time allegros in B flat (the Divertimento K287, the Symphony K319, the unfinished Clarinet Quintet movement K516c, the Piano Sonata K570 and the String Quartet K589 are some of the others) which all exhibit a similar lively yet lyrical mood and show remarkably similar formal designs. The wide variety of melodic ideas in K424 is especially appealing, and, as contrast, there is some particularly brilliant concerto-style passagework for the violin, and a development whose climax is a spirited canonic episode, where viola and violin each take the lead in turn. The following ‘Andante cantabile’ is a single extended violin melody. Two features are especially remarkable: the rich harmony that the viola, usually playing two notes at a time, is able to suggest, and the lack of emphasis on the cadence points. This creates a free, romantic style of lyricism. The outlines of the last movement, an ‘Andante’ with six variations, are by contrast absolutely clear, with a different character for each variation and a coda that transforms the theme into a lively German dance. The viola shares in the presentation of the initial theme and has a leading role in several of the variations.

The Divertimento K563 was almost certainly composed for Mozart’s friend and fellow-mason, Michael Puchberg (there is some doubt whether it was this trio, the Piano Trio K542, or both works that Puchberg was responsible for). The surviving evidence of their relationship, the numerous letters from Mozart begging for stop-gap loans, is sad and embarrassing. At this period Mozart’s friend was a wealthy businessman, but was himself to die in poverty. Before this, however, his generosity extended, after Mozart’s death, to giving financial help to Constanze. Puchberg clearly appreciated Mozart. He was invited, as a special favour, to the early rehearsals of Così fan tutte—Joseph Haydn was the only other person to be so honoured. Mozart entered the Divertimento in his catalogue on 27 September 1788. The preceding months had been a period of deep financial crisis, yet highly productive; they had seen the completion of his last three symphonies, two piano trios, and the celebrated ‘easy’ Piano Sonata K545, among other works.

In his early youth, Mozart had been extraordinarily clever at mimicking different musical styles; he could find the right idiom for an opera seria just as easily as for a Viennese symphony. By 1788 his composing technique had become so superb, his intellectual grasp of the musical material so sharp, that he was able to introduce all sorts of unexpected procedures into his chosen style without compromising its integrity. So, in K563 he adopts the light, engaging divertimento manner as a starting point for all six movements, but in each case introduces some surprises that have the effect of enriching and deepening the music.

In the first movement, the opening theme and the regular, balanced second subject, with violin and cello singing sweetly in parallel sixths, both suggest a popular style, as do the alternating passages of brilliant passagework. But the way these passages are shared out among the three instruments, creating constant variations of texture, the way even this passagework is composed of salient motifs, and the constant flow of subsidiary ideas, give to the music a rich inner life. It was this plethora of invention that many of Mozart’s contemporaries found difficult to follow, and the development section of this movement can still sound startling, beginning with a series of remote modulations that deeply disturb the tonal equilibrium, and continuing with the most intense three-part counterpoint.

The ‘Adagio’ has the atmosphere of a nocturnal serenade, with its elegant melodic lines and rich textures created by violin or viola double-stopping. After the first movement, with its large number of different motifs, we notice how the opening cello figure, rising through the notes of an A flat major chord, dominates the discourse. On its second appearance, transferred to the violin, it is ornamented with the range of its second phrase extravagantly increased. This elaborated version, returning for one last time in the extended coda, provides the movement’s climax.

The first of the two minuets is an energetic piece, beginning with emphatic cross-rhythms, and, like the first two movements, it is based on an idea that features the notes of the tonic chord. Mozart is both systematic and imaginative in the way he shares out evenly the role of the leading voice; K563, indeed, initiates a democratic style of string writing of which he was to make use in the three ‘Prussian’ quartets and the two late quintets.

The Divertimento’s three final movements have a lighter, more popular tone than the first three: the ‘Andante’ variations based on a simple, rather old-fashioned theme; the second minuet, with its hunting-horn motif; and the folk-like melody of the rondo finale. Yet in each case, Mozart’s sophistication breaks through almost immediately. In the ‘Andante’ the theme, with its two repeated sections, is played alternately in two-voice and three-voice settings; this initiates a movement in which, instead of the usual note-for-note repeats, we constantly alternate between different variations. Especially beautiful and noteworthy is the minor-key variation, composed throughout in three-part invertible counterpoint (three melodic lines that will fit together whichever of them is the top, middle, or bass). The second minuet is provided with two trios (so that the form is ABACA rather than the customary ABA) and a coda. The first trio is a memorable waltz-like episode featuring solo viola and including a dreamy section where the harmonic movement comes to an almost complete standstill.

If the Divertimento as a whole seems to sum up the state of Mozart’s compositional art in 1788, the final ‘Allegro’ points towards the brief future that remained for him. It’s not the first appearance of this type of simple pastoral melody (earlier examples include the Divertimento K334, the Oboe Quartet K370, and the G minor Quintet K516), but the style becomes more important and more strongly defined in the finales of his last years—in the Piano Concerto K595 and the Clarinet Concerto K622, for instance. Like the string trio movement, these suggest a romantic atmosphere of space and openness. But Mozart hasn’t finished with contrapuntal fun and games, either; the contrasting rhythmic motif, sounding quite trivial on its first appearance just after the opening melody, later appears in elaborate and witty canonic form, giving the whole movement a powerful injection of high spirits.