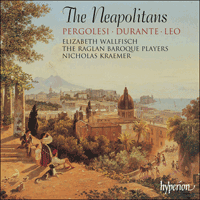 During the first half of the eighteenth century Naples, like Venice, was celebrated for its opera. Neapolitan operas, serious and in a lighter vein, were generously catered for in respect of orchestral colour, vocal virtuosity and expressive variety, and these qualities are present in the instrumental music of the period. Here is a programme of music by three of the composers who flourished in the city during that time.

Few composers other than Schubert have acquired posthumous celebrity status in as short a space of time as Pergolesi, who died at the age of twenty-six. Among the genuine products of his pen (there are many spurious 'attribs') we should probably count the violin concerto in B flat as one of his most impressive instrumental works. Durante reveals an expressive individuality, sometimes marked and sometimes quirky. Leonardo Leo was active chiefly in the sphere of opera and sacred music, but also turned his hand to instrumental compositions among which are several concertos including this lively Concerto in D for four obligato violins and continuo.

‘A collection of Italian delights … [Durante's] Concerto No 8, La Pazzia, sounds like Vivaldi gone bananas … The Raglan Baroque Players aren't the starriest of groups but on the evidence of this disc they ought to be’ (The Times)
‘A delightful aural dessert cart … will offer much pleasure, even on repeated hearings, and the legendary Hyperion sound is another plus’ (Fanfare, USA)

During the first half of the eighteenth century Naples, like Venice, was celebrated for its opera. The tradition had grown since the middle of the previous century when the earliest recorded operas were given in ‘del Pallonetto’, a sports pavilion specially converted for musical entertainment. Other theatres were quick to follow, notably San Bartolomeo and, later on, the Teatro dei Fiorentini (1681), della Pace (1724), Teatro Nuovo (1724), and San Carlo (1737). Neapolitan audiences, more than most, delighted in comic scenes, at first within the serious context of heroic opera but then, following the textual reforms of Pietro Metastasio, in comic intermezzi performed between the acts of opera seria and eventually in fully developed comic operas. Neapolitan operas, serious and in a lighter vein, were generously catered for in respect of orchestral colour, vocal virtuosity and expressive variety, and these are qualities which are present to a greater or lesser extent in the instrumental and orchestral music of the period.

As well as fostering a lively operatic tradition whose excellence was internationally renowned, Naples supported four conservatories whose aim was to prepare artistically promising boys for a musical career. After completing their studies it seems as if Naples was keen to keep its talented musicians, since, among those who retained close ties with the city were Giovanni Battista Pergolesi, Leonardo Leo, Leonardo Vinci, all of them conservatory-trained, and Francesco Durante who, at one time or another, was affiliated to three of the four establishments.

Few composers other than Schubert have acquired posthumous celebrity status in as short a space of time as Giovanni Battista Pergolesi (1710-1736). He died in Naples at the age of twenty-six, leaving behind him a legacy of at least half-a-dozen operas, a significant body of sacred vocal music, chamber cantatas and duets and a small number of instrumental pieces. His genius has been recognised, above all, by two works of a strongly contrasting character. The earlier of them, La serva padrona, a comic intermezzo, was performed at Naples in 1733, between the acts of Pergolesi’s own heroic opera Il prigionier superbo, and was instrumental in spreading the composer’s fame abroad. The other is a Stabat Mater for soprano, mezzo-soprano and strings, commissioned by a Neapolitan religious order in 1735 and completed shortly before the composer’s death. This lyrically expressive piece was to be printed perhaps more than any other single work during the second half of the eighteenth century, was furthermore adapted by Bach at Leipzig, and was performed almost a hundred times at the Paris Concert Spirituel public concert series between 1750 and 1790.

None of Pergolesi’s instrumental music, much of it now known to be of doubtful authenticity, reaches the inspirational level of the Stabat Mater or La serva padrona. Yet the genuine products of his pen, among which we should probably count the Violin Concerto in B flat, are full of rococo airiness and the melodic allure for which Neapolitan music was celebrated. It is certainly one of Pergolesi’s most impressive instrumental works and may have been commissioned by Neapolitan nobility. Pergolesi was a virtuoso violinist whose brilliance as a performer has been confirmed by contemporary report; so we may imagine, perhaps, that he played this idiomatically written piece himself. While the two outer movements, with their contrasting dynamics and ‘galant’ gestures, hint at the newly emerging early symphonic style, the melancholy, lyrical, aria-like Siciliano in G minor is redolent of the theatre.

Pergolesi’s Sinfonia in F major is scored for strings and continuo. Though not identified with any of his operas, the piece, in three movements, reflects the freshly emerging Italian sinfonia in which Alessandro Scarlatti played an important part in the earliest years of the eighteenth century. Its musical style is essentially early Classical, with light and airy textures, busy string figurations and graceful and engaging melodic ideas. In short, the style is closer to the early Classical symphony than to the richer textured, often more contrapuntally oriented Baroque opera overture. The opening movement, marked ‘Maestoso sostenuto’ is in F minor. Its initially serious character is lightened by passages of ornamented quavers in the two violin parts, bringing to mind Rameau. The centrally placed ‘Andante grazioso’ in F major is poised, dance-like and melodically beguiling, with a simplicity reflecting the taste of the time. The Sinfonia concludes with a brisk and busy Allegro whose spirited string writing generates a pleasing expressive tension.

The little Sonata in A major by Pergolesi is taken from a collection of authenticated instrumental music by the composer. It consists only of one short movement written on two staves and probably intended for keyboard. In this performance, though, it is played by violin and cello. Its engaging melodic ideas are of immediate appeal.

Francesco Durante (1684-1741) was a leading light among a gifted generation of Neapolitan composers most of whom, like himself, excelled in the composition of vocal music. But, unlike most of his fellow Neapolitans, Durante turned his back on the stage, preferring sacred musical forms, cantatas and vocal duets. The duets in particular elicited praise from his contemporaries, among them Charles Burney who visited Naples in the autumn of 1770, thirty years after Durante’s death. Eight concerti grossi of a widely varying character, and a harpsichord concerto provide evidence of Durante’s skill in the sphere of purely instrumental music. They reveal an expressive individuality, sometimes marked and sometimes quirky, as well as a pleasing stylistic ambivalence. For, though born a year before Bach and Handel, Durante demonstrates in his orchestral writing a lively interest in and conversance with newly emerging means of expression.

Durante’s eight Concerti per quartetto probably date from the 1730s or 1740s but, though copied, they were never printed. In several of them Durante uses the four-movement sonata da chiesa pattern as a framework to underpin expansive and progressive ideas that extend beyond older conventional limitations. This is very much the case with the Concerto No 2 in G minor whose suave, graceful and serious opening ‘Affettuoso’, with some unexpected harmonic shifts, leads to an unconventionally constructed fugal ‘Presto’. This is thematically linked to the introductory movement and contains extended virtuoso passages for a solo violin. The third movement, ‘Largo affettuoso’ in the key of B flat, is in an expressively lighter vein, though not without a hint of melancholy, offering a contrast with the greater severity of the preceding movements.

The Concerto No 5 in A major is of a completely different character to the G minor piece. Its three-movement pattern follows the up-to-date Venetian concerto in whose organization and development Vivaldi played a crucial role. The idiom of the two sparkling outer movements reflects that of the early symphony. Unlike the G minor concerto this one is, broadly speaking, a ripieno work for strings without one or more soloists. Vivaldi, too, demonstrated his talent for such pieces, probably at about the same time that Durante wrote his. Providing effective contrast with the two A major movements is a Largo in B minor, whose reflective character serves further to highlight their energy and tonal brilliance.

Durante subtitled the Concerto No 8 in A major, ‘La Pazzia’ (‘Folly’). It is a curious piece which pays only token respect to the established pattern of alternating tutti and solo sections. The opening movement, ‘Allegro affettuoso’, with its brief, agitated introductory bars, followed by a short recitativo passage and longer cantabile section, has some of the improvisatory character and spontaneity of the mid-century north German Empfindsamer Stil or sensitive style. Yet the apparently strange sequence of ideas, which determines the character of the entire movement, mirrors a taste for quirky display that can also be found in some of Vivaldi’s advanced concertos. The second movement (‘Affettuoso’) provides an example of Durante’s gift at cantabile writing, bringing to mind, once again, in its initial melodic and rhythmic ideas, the ‘sensitive’ writing of C P E Bach, further north. The short Allegro finale, by contrast, approaches the mature style of Vivaldi’s ripieno (without soloists) concertos, with their frequently encountered early symphonic leanings.

Leonardo Leo (1694-1744) lived and worked in Naples throughout his life. Naples was an important centre for musical training and, above all, for instruction in singing. Like his Neapolitan contemporaries Porpora, Vinci and Pergolesi, Leo was active chiefly in the sphere of opera and, to a lesser extent, sacred music – his setting of the Miserere was later to be admired both by Verdi and Wagner. But Leo also turned his hand to instrumental compositions among which are six concertos for cello, violins in two parts and basso continuo and the present Concerto in D major for four obbligato violins and continuo. The piece is introduced by a well-sustained ‘Maestoso’ whose mainly unison tuttis alternate with lyrical violin solos. A brisk, concise fugue (‘Allegro’) follows in which Leo’s colloquium of violins enters into an animated dialogue. The melancholy third movement (‘Larghetto’), which takes us into the key of G minor, contains an elegiacally expressive melody for solo violin, punctuated by sombre tutti interjections. The concerto concludes with a spirited and cheerful ‘Allegro’.