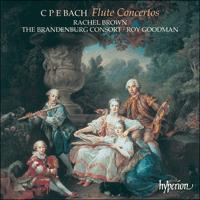 This sparkling recording of CPE Bach concertos follows Rachel Brown's highly acclaimed recording of Quantz concertos for Hyperion, also with The Brandenburg Consort under Roy Goodman's direction. Of Bach's five extant flute concertos the D minor may have been composed as early as 1747, the A major in 1753 and the G major in 1755.

For this recording, Bach's cadenzas for the 'Allegro di molto' of the G major and Largo of the A major concertos have been followed exactly, while Bach's beautiful harmonized cadenza for the Largo of the G major has been adapted a little more freely. A rich, mellow wide-bored Quantz-style flute, almost a whole tone below modern pitch, was used for the recording. A fortepiano was used for the continuo in the D minor concerto, and the discovery of horn parts for the outer movements of a harpsichord version of the D minor concerto proved too tempting to resist, hence their inclusion here.

‘This is a recording to treasure and it is above all the sombrely meditative Largo con sordini of the A major concerto that stays in my memory’ (Gramophone)
‘Rachel Brown gives performances it would be hard to better. Her agility and articulation are breathtaking. She and her hyper-alert orchestra realise all the highly strung volatility of Allegros and bring a rhapsodic freedom to the brooding slow movements’ (BBC Music Magazine)
‘Brown's playing makes a highly plausible argument for enjoying the richness and diversity of these pieces’ (BBC Record Review)
‘Enthralling music, perceptively played’ (International Record Review)
‘Both Goodman’s ensemble and Rachel Brown have the full measure of these quirkily passionate pieces’ (The Times)
‘The performances are magnificent. Brown’s technical command of her instrument is breathtaking … only the loudest of cheers will do’ (Goldberg)

Carl Philipp Emanuel was born in Weimar in 1714, the fifth (though only the third surviving) of six children of Johann Sebastian Bach and his first wife Maria Barbara. His mother died when he was only six years old. At the age of nine he became a pupil at the Thomasschule in Leipzig where his father had taken up the post of Kantor. Though an outstandingly gifted and highly active keyboard player and composer, he attended the universities of Leipzig and Frankfurt an der Oder as a student of law. Upon graduating in 1738 Emanuel was offered a chance to travel in Europe, as tutor to the son of the Russian ambassador to Dresden, but he declined the invitation in order to take up a potentially advantageous position among the musical entourage of Crown Prince Frederick, heir to the throne of Prussia. Frederick, now in his private residences at Ruppin and Rheinsberg, was at last enjoying a degree of freedom from his tyrannical upbringing. Having hitherto had to confine his musical activities to clandestine flute lessons with J J Quantz and duets with his servant, Frederick now began to assemble an impressive ensemble which was to include members of the Graun and Benda families, as well as C P E Bach, although their employment only formally commenced in 1740 upon Frederick’s succession. Bach’s autobiography states that he ‘had the honour of accompanying His Majesty in the first solo he performed as King’. Yet this was little more than the obligatory acknowledgement of his patron, whose musical integrity he is known to have questioned and with whom he did not enjoy mutual respect. Despite Bach’s considerable reputation outside the Berlin court (his treatise Versuch über die wahre Art das Clavier zu spielen achieved widespread distribution) the almost three decades he remained in Frederick’s service must have been fraught with strained relations and galling frustration at being overlooked both musically and financially; Bach’s salary in 1740 started at 300 thalers, but his own pupil Nichelmann was appointed as his assistant in 1744 on twice as much, and yet both were paid only a fraction of Quantz’s extortionate 2000 thalers plus bonuses for each new composition or new instrument.

The king’s nightly chamber concerts, at which Bach played continuo, were supervised by Quantz who enjoyed an almost total monopoly of the repertoire performed, usually six (though in later years only three) concertos and a sonata, with occasional contributions by the Kappellmeister Graun and Frederick himself. Although Bach composed a considerable number of works for flute, Quantz’s three hundred concertos for the instrument, and an even greater number of sonatas, testify to his domination and ultimately his wealth. Of Bach’s five extant flute concertos the D minor may have been composed as early as 1747, the A major in 1753 and the G major in 1755. These concertos must have presented Frederick, though an able flautist, with considerable challenges. Perhaps Frederick’s lack of appreciation of them accounts for the alternative versions of Bach’s works for harpsichord (A minor, B flat major, A major and D minor), cello (A major) and organ (G major). Bach extended the practice of rearranging established by his father, but tailored the virtuoso passagework to suit each solo instrument better. Though these arrangements are largely successful, certain passages in the G major concerto would be achieved with far greater ease at the keyboard!

Some short extracts from the ‘Allegro di molto’ of the D minor concerto appear in a practice notebook (possibly for Frederick) thought to be in Quantz’s hand, or of the Quantz school, with annotated double-tonguing patterns ti ti di dl or ti ti ri dl. Bach himself left detailed articulation marks in his scores and a wealth of instructions for performance in his Versuch on the subtle accentuation of slurs, the pointing of staccato daggers, the dwelling on tenuto notes and the expressive import of portato markings. Similarly his copious notes on embellishments imbue many of his suggestions with a highly personal approach to touch, shading, shaping and timing. He noted that ‘certain purposeful violations of the beat are often exceptionally beautiful’. Despite warning against the prodigal use of embellishments which were to be regarded ‘as spices which may ruin the best dish or gewgaws which may deface the most perfect building’, he maintained that ‘singers and instrumentalists other than keyboardists who wish to perform well need most of our short embellishments just as much as we do’. The keyboard versions of the concertos generally contain more ornaments, perhaps to compensate for the lack of sustaining power or ability to make shapely nuances, or perhaps to allow instrumentalists the freedom to embellish the melody themselves. Many embellishments from the Largo of the A major harpsichord concerto have been incorporated into the flute part here on account of their highly idiosyncratic and exquisite gestures. Bach’s cadenzas range from unmeasured melismatic flourishes to extended workings incorporating rhythmic and contrapuntal elements.

For this recording Bach’s cadenzas for the ‘Allegro di molto’ of the G major and Largo of the A major concertos have been followed exactly, while Bach’s beautiful harmonized cadenza for the Largo of the G major has been adapted a little more freely for the flute. Contemporary sources generally recommended single-breath cadenzas for singers and wind-players on account of their lack of sustained harmony. Spread chords, incorporated here, are a decidedly violinistic trait, but they occurred very occasionally in the works of Quantz, and bariolage (extended arpeggiation) was used extensively by Delusse, an eccentric French flautist who composed page-long cadenzas! Bach’s own keyboard cadenzas are not so long, and many are scored (as indeed are a few of Mozart’s) for a single unaccompanied line, often incorporating declamatory figures which demand expressive breathing spaces such as gasps, exclamations or sighs.

Bach believed passionately in rhetorical delivery and the creation of stirring and ever-shifting Affects. Thus anger might at one moment be expressed by blind rage, at another by ranting fury, seething venom, calculating revenge, resolute determination, solemn judgment, cold indifference, wounded pride, bitter disappointment, painful melancholy, broken humiliation, anguished longing, even regrets, remorse or pity. Happiness on the other hand could take the form of unbounded joy, rollicking merriment, cheap frivolity, brisk jollity, cheeky playfulness, innocent pleasure, or sweet tenderness. Bach railed against polished yet unemotional performers who ‘astound us with their prowess without ever touching our sensibilities’. It is perhaps surprising that such an emotional musician as Emanuel Bach never wrote an opera. Frederick established his own opera house with the very best Italian singers, but again the repertoire was limited almost exclusively to works by Hasse, Graun and Frederick himself. Bach, however, strove to cultivate an exciting juxtaposition of true cantabile and drama and ‘to pass skilfully from the singing style to the startling and fiery’ in which he considered instruments surpassed the voice. Dr Charles Burney, who visited him in later life, described how ‘in the pathetic and slow movements, whenever he had a long note to express, he absolutely contrived to produce, from his instrument, a cry of sorrow and complaint, such as only can be effected on the clavichord; and perhaps only by himself’. Burney’s moving account of Bach’s own deeply impassioned performance is memorable: ‘After dinner, which was elegantly served, and cheerfully eaten, I prevailed upon him to sit down to a clavichord and he played with little intermission till near eleven o’clock at night. During this time he grew so animated and possessed, that he not only played but looked like one inspired. His eyes were fixed, his underlip fell, and drops of effervescence distilled from his countenance. He said that if he were to set to work frequently in this manner he should grow young again’.

For this recording a wide-bored Quantz-style flute was used, almost a whole tone below modern pitch. Its two adjacent keys for E flat and D sharp enable differentiation between enharmonic notes throughout the compass and promote pure major thirds (narrower than in equal temperament). A fortepiano was used for the D minor concerto; Frederick possessed a number of pianos and Emanuel Bach himself was a great advocate of them. The discovery of horn parts for the outer movements of the harpsichord version of the D minor concerto was a revelation; in addition to their dramatic impact, their parts contain some of the appoggiaturas written out in note-lengths which contradict Bach’s rules in his Versuch. Many passages are shorter in the harpsichord version’s first movement, but the horn parts needed only minor adjustments to fit. To our knowledge, no such horn parts exist for the flute concerto, yet their inclusion here was too tempting to resist.

We are extremely grateful to librarians Dr Paul Raspé of the Conservatoire Royal de Bruxelles, Dr Helmut Hell of the Staatsbibliothek zu Berlin, Preußischer Kulturbesitz, and Mr Tim Eggington of the Royal College of Music, London, for their help and provision of manuscripts.