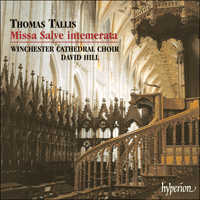 Winchester Cathedral Choir released their first album of Tallis's choral music back in 1990 (CDA66400). The recording has remained one of our all-time best sellers and featured in our 20th and 30th Anniversary editions. The choir now returns with more beautiful, inspirational music by the most influential English composer of his generation, as well as one of the most popular Renaissance composers of today.

It is only in the past few decades that much of the early Tallis repertoire has become widely available. The Salve intemerata Mass is thought to be among the earliest of Tallis's surviving music and was probably written no later than 1530. The settings of the Ordinary of the Mass are here interspersed with votive antiphons by Tallis and Sarum chant. The sole source of the Salve intemerata Mass, and one of the sources of its votive antiphon model, is a set of four out of five original part-books thought to have been compiled for Canterbury Cathedral at its refoundation in 1540.

‘Skilled, thoughtful performances of three great works by a marvellously trained choir’ (Gramophone)
‘Vivid acoustics and mellifluous phrasing in the plainsong pieces evoke a calming contemplative atmosphere. The exemplary tonal finesse and beautifully judged dynamic response in the votive antiphon Ave rosa sine spinis is striking’ (BBC Music Magazine)
‘The bright-toned singing combines the clarity and precision essential in this repertoire with notably sensitive shaping of individual lines and excellently judged speeds. The results are exhilarating’ (The Daily Telegraph)
‘Winchester is one of today’s finest English cathedral choirs, and this release can only sustain that reputation. Connoisseurs will find it a delight’ (American Record Guide)
‘A quite magnificent recording’ (International Record Review)
‘An outstanding CD’ (Cathedral Music)
‘It is all glorious music and the ambience of the Cathedral is well caught in this recording. A delightful CD, strongly recommended’ (The Organ)

’Tallis is dead, and music dies’—the final line of William Byrd’s elegy on Tallis’s death, probably to Byrd’s own words. This may well have reflected a more general sense of loss, in 1585, of one of the major musical figures in sixteenth-century England. Byrd had good reason to mourn the loss himself: although almost forty years Tallis’s junior, he had collaborated with the older composer when, having been granted the patent and monopoly to print music and manuscript paper in 1575, he planned a publication to exploit this. It has been remarked that Byrd, an astute businessman, probably needed a ready source of little-circulated Latin church music which could match his own intended contribution to Cantiones Sacrae. Who better to collaborate with than Tallis, co-organist with him at the Chapel Royal, and a man whose long career had spanned the vicissitudes of political and religious change? During ‘Fower sovereygnes reignes’, as the inscription on the grave read, had Tallis served in the Chapel Royal: from the reign of Henry VIII, through those of Edward VI and Mary into the Elizabethan era. In his earlier days, before the Reformation, Tallis had written a great quantity of music for the Catholic rite, and it is possible that, consequently, he was able to supply many of his contributions for Cantiones Sacrae ‘off the shelf’. It is some of Tallis’s earliest repertoire for the worship of the Blessed Virgin Mary which is the subject of this recording.

Thought to have been born around 1505, Tallis is first recorded in 1532 as organist at the Benedictine house of Dover Priory. In about 1537 he moved to the lively musical establishment of St Mary-at-Hill in London, and around a year later he probably went to Waltham Abbey until its dissolution in 1540, when he seems to have transferred to Canterbury for several years, joining the newly refounded secular choir at the Cathedral. Around 1543 he became a Gentleman of the Chapel Royal, which is where he would have encountered Byrd some thirty years later, and with whom he served jointly as organist from 1575 until his death. He married around 1552, but he and his wife Joan never had children. He is buried in the Parish Church at Greenwich, presumably because he was serving Queen Elizabeth at the palace there at the time of his death, and this may also reflect his possible Kentish roots.

The retrospective repertoire in Cantiones Sacrae could not in any way represent music in current use, and relatively little of Tallis’s music (and none of his compositions to Latin texts) enjoyed continual use across the centuries. Some of the 1575 motets were subsequently adapted to English words, and ‘I call and cry’—the later re-texting of his setting of ‘O sacrum convivium’—along with the Short Service, some Psalm tunes and Preces and Responses became almost the sum total by which he was remembered. In the 1920s the monumental series Tudor Church Music, produced with the support of the Carnegie Trust, revived a great deal of Tallis. With R R Terry as chairman of the editorial board, some of this revival may represent the fruits of the need to comb earlier repertoire for appropriate English music to increase what was then available for the Catholic Mass, and to expand the musical possibilities at the relatively new Westminster Cathedral in London. But, despite some facsimile reprints in the 1970s, these could not be described as accessible performable editions, and it is not until the past twenty years or so that much of the early Tallis repertoire has become more widely available. Some of that is only because there are now those willing to attempt the arduous reconstruction necessary to complete missing voices in works which are otherwise imperfect. The Salve intemerata Mass is one such composition.

Along with settings of the Ordinary of the Mass, five votive antiphons by Tallis survive, three of which are to Marian texts. This Mass is based upon the Salve intemerata votive antiphon, and it is through the more widespread survival of the antiphon, albeit in a series of two slightly differing contemporary versions, that the process of reconstruction of the deficient tenor voice-part in the Mass is rendered less hazardous. The two works are thought to be among the earliest of Tallis’s surviving music, since the text of Salve intemerata itself is known to have been published in 1527, and it is felt that, because of the location of the music in one of its sources, the setting of the antiphon cannot be dated later than 1530.

In many of the larger Benedictine priories and monasteries the growth of Marian worship since the thirteenth century had resulted in the construction of lofty and gloriously adorned Lady Chapels, often at the eastern end of the main building, which were set aside for Marian devotion. They were often the sole place in the building where polyphony would have been heard. The organist of the Lady Chapel did not necessarily have a function in the monks’ choir, where the liturgy was chanted to plainsong, but there is evidence that towards the end of the fifteenth century the expertise of the Lady Chapel musicians was being sought to enhance the worship in the monks’ choir also. At Waltham Abbey there would probably have been a small Lady Chapel choir, much as there was at Winchester, and it may be with this body of singers that Tallis was able to make use of his earlier compositions, although this does not preclude the possibility that there was a similar specialist choir during his time in Dover, and that they were the first performers of the work.

The sole source of the Salve intemerata Mass, and one of the sources of the antiphon, is a set of four out of five original part-books thought to have been compiled for Canterbury Cathedral at its refoundation in 1540. The core of the selection may represent the repertoire of Magdalen College Oxford, one of whose singers went to Canterbury at the same time as Tallis, and copies of the latter’s music may well have been contributed by him to augment the collection. This may explain how two versions of the Salve intemerata antiphon were copied into the books, the earlier one being, possibly, an adaptation in current circulation in Oxford, while the later one was that introduced by the composer himself. The other votive antiphon on this recording, Ave rosa sine spinis, is also found in the same Canterbury books, as well as elsewhere. In Canterbury Cathedral at this time Lady Mass and one of the votive antiphons, such as Salve intemerata, Gaude gloriosa and Ave rosa sine spinis, were sung daily in the Lady Chapel, much as they had been in earlier times. At the secular refounding the Benedictine Use had been replaced with that of Sarum, whose ceremonial was elaborate and particular. The function of the votive antiphon seems to have been as a separate evening liturgical devotion, often performed before the image of the Blessed Virgin.

While Lady Chapel choirs tended to be small choral units, in the rapidly growing number of secular establishments the statistics could vary considerably. For example, by 1529 Winchester was employing just four professional singers exclusively for its Lady Chapel choir, and in 1538 there were eight boys. Canterbury had about twelve men and ten boys. In other places the number of men apparently available vastly outnumbered the boys, although it is not necessarily clear that all of the men sang together on the same occasion. Nowadays, with modern choral training, in some cathedrals the vocal power of around sixteen boys can hardly be supported adequately by the efforts of as few as six men, and the effect can too often be one of the preponderance of the top line in the polyphony, rather than of richness and equality of texture. It was therefore fortuitous that, because of illness among the Winchester choristers at the time of these particular recordings, an experiment could be made to use a considerably smaller number of boys than normal, which far better balances the vocal forces of the men in this music.

The programme of works on this recording is not a liturgical reconstruction of a Lady Mass, the sections of the Common of the Mass being interspersed with the Propers for the season, but rather a recital of some of Tallis’s Marian polyphony, taking the movements of the Salve intemerata Mass as a framework, interspersed with Sarum chant Propers for Feasts of the Assumption and of the Nativity of the Blessed Virgin Mary. The programme is punctuated by a short organ solo. Where possible the plainsong was provided from contemporary sources.