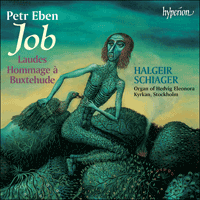 Petr Eben is one of the foremost composers from the Czech Republic. Also known as an organist, he primarily performs his own works, but is also highly sought-after as an improviser on both the piano and the organ. His works for organ are among his most popular, including Laudes and Job—both of which are on this disc.

Job is one of two major cycles Eben has written. The Book of Job is seen by the composer to be extremely topical. It answers one of the most difficult questions on life asked to this day: Why do good people suffer misfortune? The material for this work, rich in contrast, is divided into eight movements, each of which express a theme based on a quotation from the Book of Job—Destiny, Faith, Acceptance of suffering, Longing for Death, Despair and Resignation, Mystery of Creation, Penitence and Realisation, and God's Reward.

This CD is the first in a projected series of Petr Eben organ music.

‘Halgeir Schiager is a player of dazzling technique and the recording is wonderfully spacious’ (Gramophone)
‘This is astonishing music, superbly played and recorded’ (The Penguin Guide to Compact Discs)
‘Halgeir Schiager draws forth an enormous range of tone colours, and tackles this difficult music with a virtuosity that is both effortless and spectacular. A wonderful disc’ (International Record Review)
‘Halgeir Schiager’s performances are just as thrilling as the music: his virtuosity is up to the extortionate demands Eben makes of his technique, and he delivers readings of extraordinary sweep and power. An exceptional disc’ (Fanfare, USA)
‘Halgeir Schiager’s playing is immaculate throughout – imaginatively registered and subtly articulated – and it is hard to imagine a better advocate for these piece’ (Organists' Review)
‘Halgeir Schiager's performances do this never less than vividly-conceived music proud’ (The Irish Times)
‘This new series by Hyperion is long overdue, and given the quality of this first volume, should be enormously successful. Programme notes by the composer complete this admirable release by Hyperion, and I for one greatly look forward to hearing more. Excellent’ (The Organ)
‘Very well worth obtaining … Hyperion’s less-than-best is better than some labels’ best offerings’ (MusicWeb International)» More