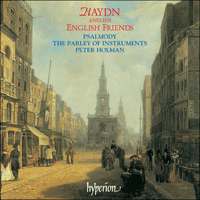 Haydn and his English Friends

Much of the music which Haydn wrote for his two visits to London in 1791/92 and 1794/95 is extremely well known today. The twelve 'London' symphonies are at the core of the orchestral repertory, and the string quartets Opp. 71 and 74 occupy a similar position in the chamber-music repertory. Yet there is one group of London works that is still virtually unknown: the six English psalm settings Haydn wrote in 1794 for Improved Psalmody, a collection of parish church music published shortly after by the Rev William Dechair Tattershall (1752-1829). This recording brings together the first recording of Haydn's English psalms with music by his circle of friends and admirers in England; it throws unexpected light on Haydn's profound influence on English music.

‘A fascinating collection … wonderfully atmospheric’ (Gramophone)
‘Music both major and relatively elementary, but all of it has charm’ (Fanfare, USA)
‘An issue of great historical interest … performances (lovely solo and choral singing) are excellent: so is Peter Holman's scholarship’ (MusicWeb International)
‘A jewel of a disc’ (Amazon.co.uk)

Much of the music which Haydn wrote for his two visits to London in 1791/2 and 1794/5 is extremely well known today. The twelve ‘London’ symphonies are at the core of the orchestral repertory, and the string quartets Opp 71 and 74 occupy a similar position in the chamber-music repertory. Even the long-neglected London piano trios and the opera Orfeo ed Euridice (1791) have become familiar in recent years in performances and recordings. Yet there is one group of London works that is still virtually unknown: the six English psalm settings Haydn wrote in 1794 for Improved Psalmody, a collection of parish church music published shortly after by the Rev William Dechair Tattersall (1752-1829). This recording brings together the first recording of Haydn’s English psalms with music by his circle of friends and admirers in England; it throws unexpected light on Haydn’s profound influence on English music.

The CD begins with a graceful tribute to Haydn by one of his most fervent English admirers, the Bath doctor and amateur composer, Henry Harington (1727-1816). The text of What art expresses (and, it seems, the elegant tune) is by Harington, but the setting is by Haydn himself, a strange but satisfying mixture of solo song, partsong and piano variations; it was written in August 1794. Remarkably, we believe that this is also the first recording of this small masterpiece.

Haydn’s six English psalms were part of an attempt to reform English parish church music. By the late eighteenth century the two metrical versions of the psalms used in parish churches, the sixteenth-century ‘Old Version’ by Sternhold and Hopkins and the late seventeenth-century ‘New Version’ by Tate and Brady, seemed uncouth and antiquated, as did the repertory of vigorous and homely settings of them in ‘fuguing-tune’ style by provincial eighteenth-century composers. Tattersall published Improved Psalmody partly to promote the more refined and ‘poetic’ version of the psalms by the Rev James Merrick (1720-1769), fellow of Trinity College, Oxford. But his aim was also to promote a simpler and more refined type of setting. The pieces in Improved Psalmody are nearly all in the three-part ‘trio sonata’ style derived from galant secular music and associated particularly with dissenting chapels or the chapels of the various charitable hospitals in London.

Tattersall’s aim was to promote this new style in Anglican churches, and to achieve it he dedicated the volume to George III and recruited a massive subscription list, including the queen, seven princesses, the archbishops of Canterbury (six copies) and York (ten copies), virtually the full bench of bishops, the chancellor of Oxford University and many heads of colleges, and an impressive list of aristocracy, gentry and clergy. Furthermore, his musical settings were provided by a panel of distinguished London composers, including Samuel Arnold, Philip Hayes, William Shield, John Stafford Smith and William Parsons. Many of them were members of the Musical Graduates Club, which Haydn joined after he received a DMus at Oxford in July 1791. It seems that his fellow members persuaded him to contribute to the collection on his return to London in 1794, for he recorded in his third London notebook the following inscription on a piece of silver plate, now apparently lost:

In the year 1794 Dr Haydn, Dr Arnold, Mr John Stafford Smith, and Mr Atterbury declared their readiness to cooperate with Dr Cooke, Dr Hayes, Dr Dupuis, Dr Parsons, Mr Calcott, the Revr Osborne Wight, Mr Webber [Webbe], Mr Shield, and Mr Stevens in their Exertions towards perfecting a work for the Improvement of Parochial Psalmody. As a Small Token of esteem for his abilities and of gratitude for his Services this Piece of Plate is presented to Doctor Haydn by W D Tattersall.

Tattersall evidently planned his collection of settings of the 150 psalms in six volumes of 25 psalms each, but only the first three were published. He wrote in the preface that ‘we are perfectly agreed that plainness and simplicity are the grand criterion’, and the pieces in the first part are rather dull, with plain harmonies and upper parts moving predictably in sixths and thirds. But the music in the second and third parts is considerably more interesting, perhaps because they contain Haydn’s six contributions (to portions of Psalms 26, 31, 41, 50, 61 and 69). These pieces would have shown his English colleagues how to be plain and simple while maintaining musical interest; by 1794 Haydn was incapable of writing anything boring or predictable. Four of them are in the minuet rhythm of so much dissenting hymnody, but they all have points of subtle contrapuntal and harmonic interest, and the through-composed How oft, instinct with warmth divine has an extraordinarily wide-ranging harmonic plan, with a surprising amount of counterpoint in a fundamentally homophonic texture. Similar things could be said of The Lord, th’ almighty monarch, spake, a delightful anticipation of ‘The heavens are telling’ from The Creation. Haydn’s example inspired some fine pieces by other composers, such as Samuel Webbe’s beautiful setting of Where, Lord, shall I my refuge see? and William Shield’s brilliant and memorable evocation of ‘God’s Approach to the Sanctuary’, Ps. 68, vv. 29-32.

Tattersall’s preface is also revealing about the performance of psalmody. He suggests that the choir should sing both upper parts in octaves, a procedure that produces rich five-part harmony out of three parts. We have also followed his advice in allocating the congregation in two pieces to the top part while the choir sings in harmony. However, we have preferred to treat two of the Haydn settings as sacred partsongs with piano accompaniment, following Tattersall’s advice that the pieces were also suitable material for families to sing on Sunday. Tattersall says nothing about how he wanted the pieces in his collection accompanied, but Shield included a ‘violoncello’ part for My God, my King, with joyful view, and small groups of instrumentalists would doubtless have been used in rural churches without organs. In urban churches the organist would have accompanied the voices and improvised preludes and interludes; those in Haydn’s Long life shall Israel’s king behold were devised by Timothy Roberts specially for the recording.

The most extended piece of this CD is the remarkable anthem Horrible is the end of th’ unrighteous generation by John Stafford Smith, published in 1793. It contrasts a ‘good’ pair of soloists, alto and bass, who try to convert a ‘bad’ trio of two tenors and bass, using alternate threats and promises rather after the fashion of a pair of modern TV detectives. The work was published with conventional organ accompaniment, but several passages suggest that Smith originally had stringed instruments in mind, so I have scored it for string quartet with organ continuo; perhaps it was originally written for some special occasion such as a choral festival, when an instrumental group was available.

Charles Burney was one of Haydn’s earliest and most loyal English admirers, and his Dialogue Hymn, Tell us, O women, uses a galant idiom not unlike early Haydn, though it was written long before Haydn’s music became known in England; it was published in 1769 in an important collection of music compiled for the chapel of the Lock Hospital in London. It contrasts two pairs of pilgrims, one male and one female.

The three remarkable sacred songs by Johan Arnold Dahmen are surrounded by mystery. Dahmen came from a large musical family of German extraction working in Holland, and was one of the cellists in the orchestra J P Salomon provided for Haydn’s London concerts. He is said in dictionaries to have died in 1794, but his collection of Sacred Songs was not published until at least 1803, and he seems to been given an annual benefit concert in London until at least 1808. The collection was dedicated to the Church of England, yet it seems to be devotional rather than liturgical, and uses an idiom that marries the sophisticated idiom of Haydn’s late quartets with the style of German lied; the songs must be among the earliest pieces specifically for voice and string quartet. A final puzzle is their texts: they seem to be prose, yet in places they use a poetic idiom. They are occasionally obscure and unidiomatic, but since they are probably by the composer himself (who was not a native English speaker), we have resisted the temptation to rewrite them.

We have also included on this CD two tributes to Haydn by later provincial composers. John Foster of High Green House near Sheffield stands out among psalmody composers in that he was a member of the gentry rather than the artisan class, and was accomplished, ambitious and aware of current trends outside parish church music; essentially, he took the idiom of Haydn’s late symphonies and The Creation as his starting point. His lively setting of Psalm 50 makes an interesting contrast with Haydn’s The Lord, th’ almighty monarch, spake; it is also a setting of Psalm 50, but in the very different Elizabethan Old Version.

The stocking manufacturer William Gardiner of Leicester was another ardent Haydn enthusiast, who supposedly sent the composer six pairs of stockings embroidered with themes from his works. He is mainly remembered today for publishing a series of volumes of sacred works based on themes by Haydn, Mozart, Beethoven and others. Arrangements of this sort have been much reviled in modern times, but they played an important role in introducing the ‘sublime’ qualities of Classical instrumental music into church music, and the genre was surprisingly long-lived – the young Elgar, for instance, turned part of a Mozart violin sonata into a Gloria for chorus and organ. In this case, Gardiner had the inspired idea of turning Haydn’s famous variations for string quartet on his Emperor’s Hymn into an anthem by adding voices to the strings and reordering the piece into a rondo structure, omitting the more unsingable passages in the process.