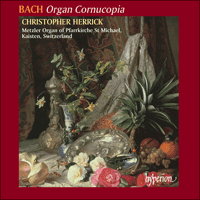 Continuing the complete survey of the organ music of J S Bach, this 'horn of plenty' contains a host of shorter pieces, some of which are incomplete and some whose attribution to Bach is in question. However, questions of authorship have been laid aside for the moment and we ask you simply to enjoy a succession of little gems which provide pleasure for listener and performer alike.

When the autographs of so many of Bach's completed organ works have disappeared it is worthy of some comment that, with the exception of the Pedal-Exercitium, BWV598, all of the fragmentary works on this disc have survived in the composer's hand. As they are all of superb quality it is interesting to speculate on what deterred Bach from continuing them. Whereas the Fantasia in C, BWV573, reaches a definite cadence, the Fugue in C minor, BWV562, and the two chorales break off in mid-sentence. Perhaps they were composition exercises for continuation by one of his pupils. Although various Bach stylists have produced completions of the fragments, Christopher Herrick prefers to present them 'torso-like', leaving them dangling tantalisingly in the air.

This ‘horn of plenty’ contains a host of shorter pieces, some of which are incomplete and some whose attribution to Bach is in question. Unfortunately this cannot be the place for a detailed discussion of the acceptance or rejection of Bach’s authorship of these works: the enormous flowering of Bach scholarship, particularly since the Second World War, has seen a gradual drawing up of battle lines between opposing scholastic factions, leading to some very hot-headed debate. In the absence of hard evidence, scholars have to resort to quasi-scientific analysis; by comparing stylistic features in the doubtful works with those whose provenance is not in question, they hope to show that Bach couldn’t have been the composer of pieces which contain lapses of technique or invention. Of course this approach can ultimately only be subjective. We know little about Bach’s training as a composer and it surely does him no disservice to accept that he could have written music which does not achieve the standard of perfection of the rest of his output. However, we should lay aside questions of authorship for the moment and simply enjoy a succession of little gems which provide pleasure for listener and performer alike.

The trio on the Christmas chorale Herr Christ, der einig Gottes Sohn, BWV-Anhang 55, resembles the fourth movement of Cantata 140, Wachet auf, ruft uns die Stimme, which Bach transcribed as the first of the Schübler Chorales – the chorale melody, slightly decorated, is in the tenor against an obbligato melody in the right hand with a continuo bass part in the pedals.

When the autographs of so many of Bach’s completed organ works have disappeared it is worthy of some comment that, with the exception of the Pedal-Exercitium, BWV598, all of the fragmentary works on this disc have survived in the composer’s hand. As they are all of superb quality it is interesting to speculate on what deterred him from continuing them. Whereas the Fantasia in C, BWV573, reaches a definite cadence, the Fugue in C minor, BWV562ii, and the two chorales break off in mid-sentence. Perhaps they were composition exercises for continuation by one of his pupils. Although various Bach stylists have produced completions of the fragments, Christopher Herrick prefers to present them ‘torso-like’, leaving them dangling tantalisingly in the air.

The Fantasia in C, BWV573, was written into the Notebook for Anna Magdalena Bach; its twelve bars are pregnant with motifs which would clearly have given rise to a work of considerable length and richness had the composer chosen to continue it. The fact that an organ piece was included in a collection of predominantly harpsichord pieces has given rise to the speculation that Anna Magdalena wished to learn the organ. (Has anybody yet researched the subject of female organists in the eighteenth century?)

The complexity of part-writing in the five-voiced Fugue in C minor, BWV562ii, matches well the Fantasia in C minor, BWV562, to which it was attached (recorded on Hyperion CDA66791/2). Already by the second set of entries, just before the fragment breaks off, Bach introduces a stretto. If this is indeed an exercise it is a daunting one, definitely not for the faint-hearted!

Wie schön leuchtet der Morgenstern, BWV764, sets the first three lines of the choral plus the beginning of the repeat of the first. The chorale melody appears as a cantus firmus in the right hand above imitative accompanying voices. To introduce the repeat of the first line of the tune, just before the music breaks off, Bach expands his motif with extra decorative notes and also alters the speed at which the harmony changes.

Jesu, meine Freude, BWV753, is taken from the keyboard collection which Bach compiled for his son Wilhelm Friedemann and has a highly decorated version of the tune over expressive chromatic harmonies. The 33 bars of the Pedal-Exercitium, BWV598, test the skill of the performer in many areas of technique – changing patterns of alternate toe-pedalling, leaps, repeated notes and scale passages. It has been suggested that it could also have originated as a work for cello.

The beautiful setting of the Lord’s Prayer, Vater unser im Himmelreich, BWV762, in what has come to be known as ‘the Buxtehude style’, has a decorated cantus firmus accompanied by imitative lines which foreshadow the phrases of the chorale. After a leisurely introduction in which the chorale is anticipated in full-length notes, the speed of the accompanying lines is doubled from the second line onwards. The slight angularity of the melodic line is softened by the introduction of triplets in the penultimate phrase, a particularly affecting touch.

Neither of the two works included in this collection with the title ‘Concerto’ has a known instrumental original. The Concerto in G, BWV571, is in the standard three-movement form of the concerto grosso but is identified in the sources both as ‘Fantasia’ and ‘Partita’. Although the lively first movement occasionally hints at the tutti/solo alternation of the concerto it can also be heard as a rigorous working-out of the opening theme. After a dramatic interrupted cadence, the figuration with which the movement ends is definitely that of the fantasia rather than the concerto. The brief slow movement in E minor is based on a sighing figure, heard both in its original descending form and in inversion. This leads directly into the third movement, a chaconne based on a descending six-note theme clearly present throughout. On its final appearance in the bass, two extra notes are added to make a complete octave, leading to a pedal point for the final flourish and cadence.

The generally pessimistic tone of Psalm 12, ‘Help Lord, for the Godly man ceaseth; for the faithful fail from among the children of men’ on which the chorale Ach Gott vom Himmel sieh darein is based, is matched by the anguished chromatic counterpoint of BWV741. The chorale is developed in canon throughout; occasional use of double pedalling enriches the texture even further.

The three verses of the partita on Ach, was ist doch unser Leben, BWV743, employ the techniques of decorated cantus firmus – harmonisation with interludes and pedal cantus firmus. The many descending arpeggios, particularly at the end of the first and third sections, suggest the musical equivalent of a shrug, mirroring the resignation of the opening line of the chorale – ‘What then is our life?’

As various commentators have pointed out, the subject of the Fugue in D major, BWV580, is very similar to the counter-subject of the Allabreve, BWV589. There is little in the way of fully developed fugal writing but the long sequences, based on figures from the subject, give it a breezy, optimistic air.

The Passiontide chorale Christus, der uns selig macht, BWV747, effortlessly combines two distinct styles into a seamless whole. For the first half of the chorale the melody, in the tenor, is embedded in a three-part instrumental texture. Later, the melody passes to the right hand where it is subjected to considerable embellishment, in fantasia style. The moving ending, a kind of unaccompanied recitative, perhaps suggests the loneliness and rejection of the betrayed Christ.

Although the shape of the delightful little trio on Liebster Jesu, wir sind hier, BWV754, is clearly related to the structure of the chorale, the derivation of the motifs, apart from that in the first bar, is much looser. Gelobet seist du, Jesu Christ, BWV723, is a straightforward setting with the cantus firmus in plain notes in the top part. The Prelude in C, BWV567, deploys its opening motif, or its inversion, in practically every bar its brief 34-bar span.

Although generally included among the harpsichord works, the widely-spaced chordal conclusion of the Fugue in C, BWV946, suggests the use of the organ pedal. It is based on a trio-sonata movement by Albinoni.

The chorale O Vater, allmächtiger Gott, BWV758, is based on a plainsong Kyrie. In the first three verses of this four-verse partita, the cantus firmus is clearly audible in the top part above progressively more lively figuration. In the final section it forms the bass of a trio-sonata texture.

Like BWV946, the Kleines harmonisches Labyrinth, BWV591, is sometimes regarded as a harpsichord work; the arpeggiated chords at the end of the first section suggest an affinity with the Chromatic Fantasia and Fugue. The three-movement design – Introitus – Centrum – Exitus – represents a journey away from and back to the clarity and purity of C major by way of a series of convoluted harmonic side-shifts. The appoggiaturas of the fugal subject in Centrum give rise to one statement of the BACH motif (B flat, A, C, B natural) in its penultimate bar – whether by accident or design it is hard to say.

Described in the manuscript source as a ‘Concerto in D sharp’ and attributed to ‘Mons. Bach’, the Concerto in E flat, BWV597 is in effect a trio sonata without a slow movement. The material of the first movement becomes progressively more decorated while the second is an easygoing gigue.

The final two chorale preludes on this disc are both examples of the motet style made popular by Pachelbel – undecorated chorale melody in the top part with imitative accompanying voices which foreshadow each line of the chorale. However, they could not be more different in their effect. Nun freut euch, lieben Christen gmein, BWV755, is a very straightforward setting of the Advent hymn, whose occasional syncopations suggest joy at the incarnation of the Saviour. The version of the Creed, Wir glauben all an einen Gott, BWV765, is an altogether more complex piece with dense counterpoint and complex harmony.

The Trio in G minor, BWV584, is a version of the aria Ich will an den Himmel denken for tenor, oboe and continuo from Cantata 166. The anonymous author has preserved Bach’s oboe and bass lines but invented a second manual part which occasionally makes reference to the vocal line but more often develops motifs from the oboe part in imitation.

Finally, a work which is indisputably by Bach, the Prelude and Fugue in C major, BWV531. An early work, possibly dating from his time at Arnstadt, it is a brilliant example of the ‘stylus fantasticus’, familiar from the works of Buxtehude, Lübeck and Böhm. From the characteristic opening pedal solo to the virtuoso passage-work and repeated-note fugue theme there is a feeling not only of youthful exuberance but also of mastery.