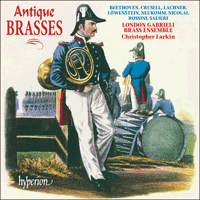 The Antique Brasses project is an exciting development in the field of historical performances.

Much fine original brass music by well-known composers has lain neglected since written. This treasure house of forgotten material, by composers such as Beethoven, Rossini and Crusell has been discovered by Christopher Larkin, director of the London Gabrieli Brass Ensemble, in famous archives and libraries, including The British Museum and the Bibliotheque Nationale, Paris. Much of this music was forgotten for a century and a half—very little has been performed in recent times and none of it has been recorded on the instruments for which it was composed. Only now, when there are so many virtuoso performers on period brass, has a recording such as this become possible.

‘A captivating snapshot of how brass music might have sounded … Their combined sound, especially in the larger ensemble, is like any good antique: full of character, gloriously grainy, slightly worn, but unique, and a fine tribute to the original craftsmen. The performances on these troublesome instruments are heroic, with virtuoso playing on the hand horn from Andrew Clark that belies the labours involved. An invaluable contribution to a neglected area of musical research and an hour's fascinating listening’ (BBC Music Magazine)
‘Some exquisite lyrical playing, with extraordinary beautiful tone colours’ (Early Music Review)
‘Excellent recorded sound … a roundly fascinating release’ (International Record Review)
‘The whole recording radiates with the energy that comes from playing these captivating old instruments, and the players' commitment to them’ (Trombonist)