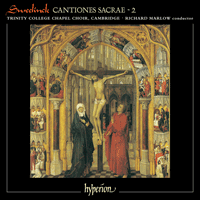 The last great representative of that fertile 'golden age' of Netherlands polyphonists, Sweelinck merits recognition not only as one of the most prolific and versatile musicians of his time but as one of the leading choral composers of the late Renaissance.

The Cantiones Sacrae are Catholic motets, in Latin, for five-part choir with basso continuo; almost all the texts are drawn from the Vulgate and the Roman liturgy. However, the texts are varied—ranging from the desolate and meditative to the exuberant and festive. Within these pieces we hear some of Sweelinck's most interesting and distinctive music.

It is hoped that the present recordings will help draw attention to a rich and diverse repertoire that deserves to be far better known. And who could be better equipped to perform it than Trinity College Chapel Choir under the direction of Richard Marlow?

‘An important recording landmark’ (Gramophone)
‘Richard Marlow and his youthful choir deserve credit not just for salvaging this music but for presenting it in such vital and responsive performances’ (BBC Music Magazine)
‘A noble achievement which should do much for Sweelinck's reputation’ (Early Music)
‘Trinity College Chapel Choir seems ideally suited to this music. Diction is good, intonation flawless and the antiphonal effects well balanced. A worthy addition to the collection’ (Early Music Forum of Scotland News, Scotland)