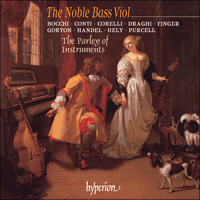 The viol consort was introduced to England in the early sixteenth century and was mainstay of domestic music until the middle of the seventeenth century. After the Restoration of Charles II to the throne in 1660, things rapidly changed with the rise in popularity of the violin amongst court musical lfe and amateurs.

Composers soon ceased to contribute to the viol consort repertory, with some of Purcell's contemporaries such as Roger North regretting the change. North acknowledged that the violin was 'very excellent in it's kind', but thought that the 'noble Base Viol' embodied all its 'sublimitys'.

As North recognised, the viol was not entirely supplanted by the violin in the Restoration period. The bass viol remained in use as a continuo instrument in chamber music until the early eighteenth century, and the instrument acquired a new repertory of solos, duet and trios with continuo. This recording is a survey of this little-known but rewarding repertory.

The viol consort was introduced to England in the early sixteenth century and was the mainstay of domestic music until the middle of the seventeenth century. But things changed rapidly after the Restoration of Charles II to the throne in 1660. He preferred the fashionable French dance music associated at the time with violins, and enlarged the English court violin band to form the ‘Twenty-four Violins’, giving it a greater role in court musical life. The violin also became fashionable among amateurs, to the extent that composers soon ceased to contribute to the viol consort repertory: the last collection seems to be Matthew Locke’s Consort of Four Parts, written in the 1660s, though Henry Purcell drew on the English consort music in a group of fantasias composed around 1680 as apart of a course of intensive study of traditional contrapuntal techniques.

Some of Purcell’s contemporaries regretted the change. Thomas Mace praised the ‘Sprightly, Generous, and Heroick Viol’ and thought the ‘High-Priz’d Noise’ of violins only ‘fit to make a Mans Ears Glow, and fill his Brains full of Frisks’. Roger North acknowledged that the violin was ‘very excellent in its kind’, but thought that the ‘noble Base Viol’ embodied all its ‘sublimitys’, and had other advantages as well: ‘as well as drawing a noble sound; and all with such a vast compass, as expresseth upper, mean and lower parts, and in a lute way toucheth the accords, and is no less swift than the violin itself, but wonderfully more copious’.

As North recognised, the viol was not entirely supplanted by the violin in the Restoration period. The bass viol remained in use as a continuo instrument in chamber music until the early eighteenth century, and the instrument acquired a new repertory of solos, duet and trios with continuo. This recording is a survey of this little-known but rewarding repertory. Although some of it has links with the past – William Gorton’s duets relate to Matthew Locke’s duos (recorded on Hyperion CDA66727) – it is in general much more eclectic than the main English viol repertory. Some of it, such as Benjamin Hely’s sonatas, adapt violin idioms to the viol, while Gottfried Finger introduced English composers and players to the style of German and Austrian viol music. The composed repertory came to an end in the 1720s – Bocchi was the last person to publish viol solos in Britain before modern times – though a few players remained, and presumably played arrangements of violin music, as their colleagues in France were beginning to do.

An important figure in the creation of this new viol repertory was the Oxford singing man and music copyist Francis Withy, who wrote out some arrangements for bass viol in a manuscript now in the Fitzwilliam Museum, Cambridge. Withy evidently realised that the lower pitch and ‘noble sound’ of the bass viol would enhance two of the most memorable ground basses in the recorder repertory, the ‘Italian Ground’ by the organist Giovanni Battista Draghi and the chaconne ‘two in one upon a ground’, from Henry Purcell’s Dioclesian – an ingenious exact canon between the upper parts. In a sense, Benjamin Hely was doing the same thing: the starting point for his six sonatas for two bass viols and continuo seems to have been Purcell’s violin trio sonatas. Almost nothing is known of Hely except that he was described as the ‘late famous Master’ when his instruction book The Compleat Violist was published in 1699. William Gorton, a violinist in the royal band, published a collection of simple bass viol duets in 1701 that was clearly designed for domestic use, perhaps for the use of his pupils.

Gottfried Finger was born at Olomouc in Moravia, and may have studied there with Heinrich Biber who played the bass viol as well as the violin. He apparently came to England in 1685 or 1686 and worked as an instrumentalist in James II’s Catholic chapel, opened on Christmas Day 1686. After the Glorious Revolution he worked in London’s theatres and concert halls but left England in disgust in 1701 after coming last in the famous competition to set Congreve’s masque The Judgement of Paris. To judge from his bass viol music, Finger was a formidable virtuoso, and he was also one of the most prolific composers for the instrument of his time. Unfortunately, much of it survives without continuo parts; they have been reconstructed where necessary by Mark Caudle for this recording.

Finger’s Sonata No 2 in D major, one of a set of six that survives in an Oxford manuscript, is similar in structure and idiom to Biber’s solo violin music. It begins with a patchwork of contrasted and mostly improvisatory sections, which is followed by a melodious aria with two variations. The last section begins in improvisatory vein but moves on without a break to a passage in minuet rhythm, and then to one in jig rhythm. Finger developed this device – the incorporation of dance sections into ‘patchwork’ sonata structures – on an epic scale in his Suite in D major for two bass viols and continuo. It begins with two separate dance sections, an almand and a jig, but the bulk of the work is a grand and lengthy chaconne which is prefaced, interspersed and followed by improvisatory passages, creating an unusual and satisfying structure that combines elements of the suite, the sonata and the fantasia. Finger’s charming Pastorale for three bass viols and continuo was probably written before he came to England, though it survives in an Oxford manuscript. It was perhaps written to be played in a Moravian church at Christmas, for it quotes several Czech carols and is in A major, a key often associated at the time with Christmas music.

The last phase of the English bass viol repertory was focused on Italian music. The centre for the dissemination of the Italian style in early eighteenth-century London was the Italian opera company at the Haymarket Theatre, and the anonymous collection Airs and Symphonys for the Bass Viol (London, c1710) includes a selection of arrangements of arias from the operas put on there, sometimes ornamented in the florid Italian style. Another aspect of the English vogue for Italian music was the enthusiasm for Arcangelo Corelli; Roger North wrote that his sonatas and concertos became ‘the onely musick relished for a long time’. It is not clear who made the bass viol arrangements of Corelli’s Opus 5 sonatas. The whole set survives in a manuscript in Paris, but since two of them were published in London (they are found bound into copies of the 1712 edition of Christopher Simpson’s The Division Viol), so he may have been an Englishman. Little is known of Lorenzo Bocchi beyond the fact that he worked in Edinburgh and Dublin and published A Musicall Entertainment for a Chamber in Dublin 1724 or 1725. It contains sonatas for recorder, violin, violoncello and bass viol, as well as a cantata setting a text in Scots. Bocchi’s viol writing is fluent and idiomatic, so it is likely that he played the instrument.

George Frideric Handel is not normally associated with the viol, but he wrote prominent bass viol obbligato parts in two of his Italian works, and specified the instrument in the famous aria ‘V’adoro pupille’ from Act II scene ii of Giulio Cesare (1724). About the same time he wrote out his G minor violin sonata HWV364, and added the opening of the piece at the bottom of the page in the alto clef with the words ‘per la Viola da Gamba’ – apparently an instruction to a copyist to transcribe the whole sonata for bass viol. Handel may have sanctioned the transcription to provide someone in his circle with a showpiece; a number of the cellists who played for him, including Nicolino Haym, Pippo Amadei, Francis Goodsens and George Angell, are known to have played the bass viol (for more details, see the article by Julie Anne Sadie in Chelys, 1985). The G minor trio sonata only survives in a German source, and its authenticity has recently been questioned by Handel scholars. Yet it is powerful work, full of Handelian touches such as the descending harmonies in the first movement and the folk-like ideas in the last movement, and it is difficult to see who else could have composed it. It used to be played in a nineteenth-century arrangement for two cellos and piano, which gave us the idea of playing the violin parts down an octave on bass viols to illustrate the practice of appropriating violin music for the viol. In England, as in France, composers stopped writing specifically for the instrument some time before people stopped playing it.