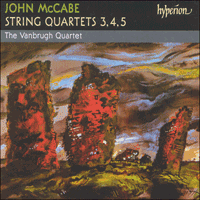 John McCabe's dual career as composer and pianist has established him as one of the leading British musicians of his generation. This premiere recording his three latest String Quartets is being released to celebrate the composer's sixtieth birthday on 21 April.

McCabe has produced an impressive body of music for strings, spread fairly evenly throughout his career. The works range from pieces for solo instruments to ensemble works including five quartets, a Trio and a now-lost Quintet (1962).

The Third and Fifth Quartets were both commissioned by the Fishguard Festival and premiered by the Gabrieli Quartet. The five movements of No 3 are arranged symmetrically in three parts like an arch, the two weightier outer ones enclosing a central group of three brief study-like intermezzi. The fourteen sections of No 5 were inspired by a series of aquatints called 'The Bees' by Graham Sutherland, but despite this apparently sectional design, the work is fully integrated, the music relying on organic developmental processes rather than the predominantly variational techniques of McCabe's earlier quartets. The single-movement Fourth Quartet was composed to celebrate the 250th anniversary of the birth of that quartet composer par excellence, Joseph Haydn. Premiered at the Wigmore Hall on 20October 1982 the score originally bore the subtitle Un piccolo divertimento, later crossed through.

‘A magnificent 60th-birthday offering to a fine composer … music of enormous integrity and genuine staying power from an underrated British master, impeccably realised on this occasion by artists and production crew alike. All in all, a very strong recommendation’ (Gramophone)