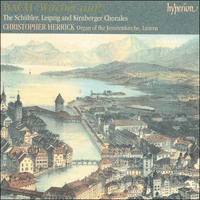 The Schübler Chorales, one of only two sets of organ works published during Bach's lifetime, owe their name to the student who collected them into one volume. The cycle charts the liturgical year, beginning with the famous 'Wachet auf!' ('Sleepers Wake!').

The Leipzig Chorales (The '18') were composed during Bach's Weimar period but were revised in Leipzig some years later. The pieces display a wealth of imagination in their setting of the themes, yet the fundamental principles of organ writing—inherited from Buxtehude and Pachelbel—remain at the heart of these chorales.

Johann Kirnberger became a student of Bach towards the end of the master's life. He grew to idolize his teacher and devoted much of his later life to collecting Bach's works. The set of chorales which bear his name were presumably never intended by Bach for publication as a 'set', but do nonetheless follow something of a liturgical cycle along the lines of that in the Schübler set.

All of the music on this album is also available as part of the specially priced box set Bach: The Complete Organ Works: ‘Let me say without hesitation that Herrick’s performances are models of clarity, accuracy, precision and musicality … this is a complete Bach that has plenty of character and verve and which would bear repeated listening’ (Choir & Organ).

‘Not only has Herrick found a simply ravishing Swiss organ which he uses with impeccable good taste, but the Hyperion team have come up with a top-notch recording. Once again they've given us a disc which combines consummate musical insight and technical mastery with sheer unalloyed listening pleasure’ (Gramophone)
‘Herrick has once again shown that his command of the Bach idiom is as total as any other contemporary organist's … an impressive addition to a milestone collection’ (Classic CD)
‘An indispensable collection and one I should not be happy to be without’ (Organists' Review)
‘Bach at his most tuneful and diverting and Herrick's style is particularly suited to them’ (Soundscapes, Australia)