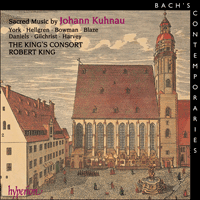 This new series from The King's Consort will introduce us to innumerable musical riches from the time of JS Bach, starting with six works by Johann Kuhnau. Kuhnau was Bach's immediate predecessor at the Thomaskirche in Leipzig, and his name and music can rightly be said to be have slipped into relative obscurity only as a result of his successor's inordinate fame.

As it turns out we find music which is immediately impressive. The five German-texted works are direct precursors of Bach's Leipzig cantatas; Kuhnau is a master of the formal structures required in the medium, and employs varied orchestral colours and choral/solo textures to great effect. Wie schön leuchtet der Morgenstern includes some of the earliest orchestral writing for horn, while Ihr Himmel jubilirt is a triumphal Ascensiontide cantata replete with trumpets and timpani. Weicht ihr Sorgen is a solo cantata, here gloriously sung by Deborah York.

Tristis est anima mea is in a somewhat different vein; this Latin text receives ravishing treatment from Kuhnau as a single-movement motet for five-part choir and organ.

‘This is an important recording of a woefully neglected figure whose music has real stature. Buy it!’ (Gramophone)
‘One of the joys of music is to discover wonderful and hitherto unknown repertoire, and this disc is a marvellous example of that. Trumpets and drums blaze away with tremendous jollity. This disc is a must’ (Cathedral Music)

The name of Johann Kuhnau (1660–1722) often evokes a shadowy figure who lives in the footnotes of Bach biographies, someone who forms part of the background musical culture against which Bach can ever more brightly shine. Indeed it was Kuhnau who inspired Bach in his choice of the title Clavier-Übung for four keyboard publications; it was he who collaborated with Bach in the examination of an organ at Halle in 1716; and he whom Bach succeeded as cantor of the Thomaskirche, Leipzig, in 1723. Furthermore, Kuhnau’s nephew, Johann Andreas, was Bach’s first principal copyist of cantata parts and must have enjoyed a close association with the new cantor.

Only comparatively recently has Kuhnau’s church music been given even a modicum of the attention it deserves. The impression gained from his later reputation and apparent antipathy towards innovation is entirely overturned. Indeed, his church music is full of just the Italianate forms he condemned in the overly ‘operatic’ church composers of the time. We do not know the precise dating for all Kuhnau’s church works, but of the collection presented here the Quinquagesima cantata Gott, sei mir gnädig nach deiner Güte dates from 1705 and the Ascension cantata Ihr Himmel jubilirt von oben from 1717. These two works have much in common; most obviously, a meticulous approach to text-setting which both follows the stresses of the individual syllables and adds emotional or pictorial colour to particularly important words (such as the coloratura on ‘jubilirt’). This overtly rhetorical approach to text-setting has its obvious heritage in the style of the Schütz era, as does the ‘speaking’ nature of the instrumental parts. Musical duration and emphasis are created by means of the repetition and sequencing of short phrases and quite often it is the instruments which provide the repetition. This has a significant psychological effect on the listener since the untexted instrumental repetitions often cause one to recall the text in a way that would not have been so significant had the music been texted throughout.

Several things suggest though that Kuhnau was not impervious to new influences between 1705 and 1717. In the earlier work the musical form is almost entirely subservient to the textual form, resulting in a kaleidoscopic array of musical phrases, styles and moods. The later work shows more rounded musical forms, particularly of the da capo type and also more of the ‘modern’ secco recitative. Nevertheless, this does not mean that Kuhnau reciprocally gave less attention to the text: while the vivid textual patterning of Gott, sei mir gnädig follows directly eight verses from Psalm 51, the text of Ihr Himmel seems chosen with the musical divisions and da capos in mind.

Kuhnau’s contrapuntal proficiency comes as no surprise. The imitations, fugues and chorale-setting of Wie schön leuchtet der Morgenstern are to us almost a Lutheran stereotype (although chorale cantatas are surprisingly rare before Bach). What is absolutely winning about this music, though, is its remarkable lyricism and the immediately memorable thematic tags (usually treated as ritornellos, such as that opening Weicht ihr Sorgen aus dem Hertzen). This is a tendency of German church music in the two or three decades surrounding the turn of the century: an influence from opera, on the one hand, and the pietistic air on the other.

The motet Tristis est anima mea shows the preservation of the traditional church style (in keeping with the traditional Latin text); it is more conservative in texture but extremely expressive within the bounds of the motet style (for example, the chromatic scale for ‘ad mortem’). This piece, also performed by J S Bach, is not securely attributable to Kuhnau. However, it shows the work of a skilled and highly imaginative composer with considerable dramatic flair.

Kuhnau’s mastery of an astonishing array of styles and forms suggests a versatile and lively musical mind, something which belies his current reputation as the somewhat dull and pedantic predecessor of Bach. Indeed he shares with the latter the ability to assimilate a large number of influences and to forge new musical complexes. All these pieces are worthy of comparison with Bach’s Mühlhausen cantatas with their ‘wet ink’ immediacy. Moreover, the textual declamation and the fluid interchange between polyphony and homophony reveals something of Handel’s heritage too (Handel encountered Kuhnau as a student and borrowed from Kuhnau’s keyboard works in his own compositions). Indeed, just as Kuhnau is the most significant link between Schütz and Bach he might also be the only German composer who was of immediate influence on the development of both Bach and Handel.