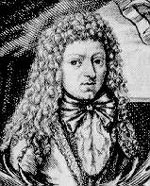 born: 6 April 1660
died: 5 June 1722
country: Germany
The name of Johann Kuhnau (1660–1722) often evokes a shadowy figure who lives in the footnotes of Bach biographies, someone who forms part of the background musical culture against which Bach can ever more brightly shine. Indeed it was Kuhnau who inspired Bach in his choice of the title Clavier-Übung for four keyboard publications; it was he who collaborated with Bach in the examination of an organ at Halle in 1716; and he whom Bach succeeded as cantor of the Thomaskirche, Leipzig, in 1723. Furthermore, Kuhnau’s nephew, Johann Andreas, was Bach’s first principal copyist of cantata parts and must have enjoyed a close association with the new cantor.

Only comparatively recently has Kuhnau’s church music been given even a modicum of the attention it deserves. The impression gained from his later reputation and apparent antipathy towards innovation is entirely overturned. Indeed, his church music is full of just the Italianate forms he condemned in the overly ‘operatic’ church composers of the time.