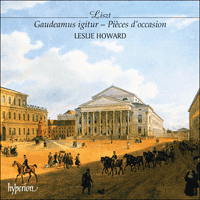 This recital gathers several varieties of occasional music (some quite ephemeral pieces cheek by jowl with more enduring creations and transcriptions) together with some of Liszt's earlier versions of pieces better known today as he finally offered them.

The student drinking-song Gaudeamus igitur ('And so let us rejoice') is here presented in two amusing and technically daring guises, and joined by various pieces Leslie Howard describes as 'pleasant and utterly unimportant trifles'; the resulting programme is, of course, charming.

All of the music on this album is also available as part of the specially priced box set Liszt: Complete Piano Music: 'Almost any way you choose to look at it, this is a staggering achievement … the grand scope of this project gives us the chance, as listeners, to experience the almost incomprehensible breadth and depth of Liszt's imagination' (International Record Review).

‘Here's a winsome collection of chips from Liszt's workbench … sound and notes are up to the high standard of the series too’ (Fanfare, USA)
‘This disc offers a little of everything, executed with aplomb and conviction by the champion of Liszt's piano music’ (Soundscapes, Australia)
‘The Liszt series has drawn forth praise from all the national music magazines, not least for the assured playing of Leslie Howard as well as the careful programming. This 1995 recording is up to the highest standards’ (Essex Chronicle)

This recital—a palindrome with an encore—gathers several varieties of occasional music, some quite ephemeral pieces cheek by jowl with more enduring creations and transcriptions, along with some of Liszt’s earlier versions of pieces better known today as he finally offered them.

The student song Gaudeamus igitur has long been associated with graduations and other academic festivals, and Liszt also used it in the music for the dramatic dialogue Vor hundert Jahren (mistakenly entered in most Liszt catalogues as a melodrama, but, in fact, a theatrical work) as well as in the present pieces. The Gaudeamus igitur—Paraphrase (or Gaudeamus! Chanson des étudiants as the Schlesinger edition gives the title) was composed for we know not what occasion, but is one of Liszt’s typically extrovert paraphrases on such material and, although quite entertaining in its dare-devilry, is scarcely a masterpiece—indeed, the extra melodic appendage which the theme acquires in midstream is numbingly banal, but fortunately funny. There is a certain amount of imagination in between a very clumping fugato and bold Hungarianisms, along with treacherous double-note glissandi and other tricks of the virtuoso’s trade. The later work on the same theme, Gaudeamus igitur—Humoreske, is actually a lot less humorous than its precursor: commissioned for the centenary of the Jena Academy Concerts of 1870, Liszt used and recast elements of the early piece in a larger work for orchestra, with optional male or mixed chorus. He also prepared versions for piano duet and for solo piano. As ever, in the solo piano version, he made many alterations to the texture to make the final result much more than a literal transcription. The fugato is much improved, the appendage to the theme is expunged, and there is an excellent contrasting slower section derived from the end of the theme. The piece ranges much further in tonality—the Hungarian variation is more imposing in A major than it was in C major—and the whole work, whilst still festive, is much more a product of Liszt’s later years.

The three Italian transcriptions are utter rarities, by three composers of varying distinction but uniform in their vanishment from the repertoire: enquiries to date reveal that F. Pezzini (his Christian name and his dates are elusive) lived in Tivoli and became acquainted with Liszt at the Villa d’Este. He was a bandmaster (‘Capo Musica del Concerto Municipale a Roma’ is his title on the cover of Liszt’s transcription), and his Una stella amica—Valzer (‘A Friendly Star—Waltz’) was transcribed, one presumes, from a work for band. Liszt’s arrangement was published both by Manganelli and Ricordi, so there must have been some prospect of popularity in its day. It remains a pleasant and utterly unimportant trifle.

Giuseppe Donizetti (1788–1856) has fared even less well than Michael Haydn as a brother of a much more gifted and celebrated man. Like Pezzini, Giuseppe was a bandmaster, although, on the strength of the present piece, does not seem totally unworthy of a place by brother Gaetano’s side. But it was at Napoleon’s side in a military capacity that Giuseppe made his career. Having developed an interest in things Turkish, he moved to Istanbul in 1828, was granted the title Pasha, and founded the court orchestra ‘Mizikay-i Hümayun’. The Grande Marche was composed for the coronation of Sultan Abdülmecid-Khan in 1839, and for some decades became the national anthem of the Ottoman Empire. Liszt composed his version when he visited and was decorated by the Sultan at Istanbul-Büyükdere in 1847. (The present writer is indebted to the Turkish composer-pianist Aydin Karlibel for his kind assistance with some of this information.) Liszt’s piece, originally entitled Grande Paraphrase de la Marche de Giuseppe Donizetti composée pour Sa Majesté le Sultan Abdul Médjid-Khan, is splendid of its kind, and well worth rescuing from oblivion.

According to the surviving correspondence, Liszt made three elaborations of the music of Pier Adolfo Tirindelli (1858–1937) in Rome on 31 October 1880, but only this elaboration of the Seconda Mazurka per pianoforte, variata da F. Liszt seems to have survived, and that rarely enough for the work to have been missing from most of the Liszt catalogues. (A letter of Liszt, in which he proposes to help Tirindelli in any way possible, speaks of a song All’ideale and an Adagio from a Trio, and suggests that all three works are ready for engraving.) Although Tirindelli was an all-round musician (he was also a violinist and a professor at the Liceo Marcello in Venice), and produced a body of work in all the major nineteenth-century forms, his personality does not seem to have been strong enough to guarantee his survival. This piece is several degrees more memorable than one might expect, and Liszt has extended it with several gentle-to-brooding variations of his own.

The three Russian transcriptions have already appeared in this series in their final versions (Volume 35: Arabesques) but, as ever, it is uncommonly interesting to compare them with Liszt’s first thoughts. The first approach to Le Rossignol, a song by Aleksandr Alyabiev (1787–1851), restricts any imitation of birdsong to the introduction, and ends rather riotously—actually much closer to the original song than the later reflection of it. The first version of the Galop russe of Konstantin Bulhakov (1812–1862) gets down to business with a much shorter introduction, and manages one extra statement of the theme and a stunningly off-course harmonic gesture in the coda. (The popularity of this piece at the time resulted in Liszt’s second version appearing within months of the first.) There is perhaps just a little too much decoration in the first transcription of Lyubila ya by Michael Wielhorsky (1788–1856), and the sixteen-notes-to-the-bar accompaniment figuration was also much reduced in the second version. But the first has a number of harmonic piquancies which it would be a shame to lose by knowing only the second transcription of this sweet drawing-room melody.

The central triptych of this programme presents the first versions of three of Liszt’s original works. The final versions of the two marches have been recorded in Volume 28 of the present series, and are much expanded from the originals, and, in the case of the Goethe march, much less march-like. In their first conceptions the pieces are quite straightforward examples of their genre. The Seconde Marche hongroise—Ungarischer Sturmmarsch was intended as a follow-up to the Heroischer Marsch im ungarischen Styl, and there are also unpublished versions of both pieces for orchestra. (The orchestral form of the later version of the Ungarischer Sturmmarsch has been published and recorded.) The Festmarsch zur Säkularfeier von Goethes Geburtstag was also drafted for orchestra in its early version, although only the later version has been published and recorded. Although the first thoughts are less poetic than the far grander final form, the principal theme remains one of Liszt’s most engaging. Between the marches is the Nocturne, the original form of the Impromptu (in Volume 2 of this series the chronology of the two pieces is described erroneously, thanks to a long-perpetuated blip in the catalogues) and, apart from the revised version’s extensions by the odd bar of several phrases, is most noticeably different for a much stronger central climax.

To be honest, Liszt never expected the original version of his Ballade No 2 to be published, but the original form has long been known—differing from the final version by the absence of two eight-bar phrases in the closing B major section, and by having a fast coda which recalls the central martial development material—this coda being itself a second draft of another cancelled fast ending. The original coda has appeared in several editions, although most of them fail to remark that, if it is performed, two eight-bar cuts need also to be made to restore the original text. It goes without saying that the beautiful quiet coda of the later version is a stroke of genius, but the present ending is not without its merits. (The final version is recorded in Volume 2 of this series: Ballades, Legends and Polonaises.)