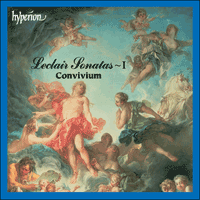 Jean-Marie Leclair is hardly the most typical composer from the late French Baroque: born and raised in Lyons rather than Paris, he was a professional dancer (and, indeed, lacemaker) before reaching his prime as a violinist; he spent much time out of France (including protracted stays in Turin and appointments in Holland and Spain); he became estranged from his second wife in his later years; and, most tantalizing of all, he was murdered in strange circumstances in his late sixties.

However, despite all these unusual factors he enjoyed an extremely successful career both as a performer and as a composer, with thirteen opuses printed before his death and two more posthumously. He found favour with the court of Louis XV and also worked for noble houses in The Netherlands and Spain.

It is clear from his music that Leclair was well acquainted with the remarkable violin writing of Locatelli, and the two had a celebrated contest in Germany. Certainly, there was no one else in France who matched both Leclair's virtuoso, idiomatic violin writing and his subtlety of compositional organization.

‘This really is a very exciting project. I can't wait for the next disc!’ (Early Music Review)
‘A persuasive introducton to arresting music’ (Classic CD)

Jean-Marie Leclair (1697-1764) is hardly the most typical composer from the late French Baroque: he was born and raised in Lyons rather than Paris (the undoubted centre of French music at that time); he was a professional dancer (and, indeed, lacemaker) before reaching his prime as a violinist; he spent much time out of France (including protracted stays in Turin and appointments in Holland and Spain); he became estranged from his second wife in his later years; and, most tantalizing of all, he was murdered in strange circumstances in his late sixties. However, despite all these unusual factors he enjoyed an extremely successful career both as a performer and as a composer, with thirteen opuses printed before his death and two more posthumously. He found favour with the court of Louis XV and also worked for noble houses in The Netherlands and Spain. It is clear from his music that Leclair was well acquainted with the remarkable violin writing of Locatelli, and the two had a celebrated contest in Germany (many commentators have also assumed that Leclair studied with the Italian master for a time). Certainly, there was no one else in France who matched both Leclair’s virtuoso, idiomatic violin writing and his subtlety of compositional organization.

The story of the French adoption of the Italian sonata style is an interesting topic in itself. François Couperin began to ape the style of Corelli in his earliest years and some of his later sonatas overtly sought to combine French and Italian styles in order to achieve a higher degree of synthesis. This ambition of unifying what were hitherto opposing idioms or ideas seems to have grown as the eighteenth century progressed in France (and, even more so, in Germany) and, as we shall see, it works at several levels in Leclair’s composition. The sonata was soon enthusiastically embraced by other French composers, becoming a medium for a large amount of amateur and professional music-making (even the virtuosic Leclair often caters for the wider market by including pieces or alternative scorings for flute). Together with the vogue for Italian sonatas came a French interest in developing performance and composition for the violin. Up to the end of the seventeenth century French violin playing was considerably simpler than that of Italy or Germany and, indeed, the profession of violinist was somewhat stigmatized as a mere adjunct to dance performance. All this began to change with visits from foreign virtuosi (such as the German J PWesthoff in the 1690s) and the publication of Corelli’s sonatas, especially the Op 5 violin sonatas of 1700. These included variations on ‘La Folia’ which proved immensely popular and sparked both a fashion for violin music and a much greater ambition on the part of those who played it.

Leclair’s four publications of sonatas for the violin seem to reflect, in microcosm, the general development of violin performance in France. The first two books (1722 and 1728) present relatively straightforward dance and sonata movements of moderate difficulty. As the principal editor of this music, Robert Preston, has observed, the third and fourth books (1734 and c1738- 1743) show considerable developments in violin technique together with a bolder harmonic style. This progression may well reflect Leclair’s own development as a violinist (which would be rather unusual by modern standards since students now generally cultivate virtuosity at the outset of their career). On the other hand, he might have improvised around the simpler frames of the earlier works, in true Corellian style, and become more specific in terms of rnamentation and associated bowing patterns, in the later works. Moreover, some have suggested that Leclair, like Corelli, may have written all his works relatively early on in his career but published them in order of difficulty or adventurousness. Whatever the facts of the matter, all these sonatas are significant in preserving something of an echo of Leclair’s original performance on the violin, idiosyncratic turns of phrase and ways of bowing and spacing chords that are the strongest traces we have of the presence of one of the most interesting musical personalities of the age.

Given Leclair’s clearly Italianate ambitions as a violinist it might first be worthwhile to ask what is specifically French about the Troisième livre de sonates (Op 5, dedicated to Louis XV). One thing that was absolutely crucial about the French culture of the time was the dominance of verbal expression, most artistically rendered in the balanced and rhyming lines of poetry, and the correct presentation of every syllable and syntactical nuance. This obviously relates also to the cultivation of dance as a parallel art of rhyme and symmetry; thus both dance and textual expression lie at the heart of musical style. Phrases should be beautifully balanced and small, and detailed and expressive ornaments help to inflect the lines (quite different from the more extravagant ornamental practice of Italy). These small, speech-like ornaments pervade much of Leclair’s notation, thus giving a French accent to even the most Italianate of movements (for example, the first Allegro of Sonata No 6). The stricter dance movements, such as the Sarabande of Sonata No 4 show a classically French balance of phrases and a lyricism that inheres in a succession of detailed nuances of melody and ornament (rather than in the longer, sweeping line of Italian style). Another feature of French style is the solemn, full-voiced texture that often opens a work; this is particularly evident in the opening of Sonata No 6 (most popular in Leclair’s time and soon nicknamed ‘Le Tombeau’). Here the lavish multiple stopping, which is really an Italian and German import, recreates something of the full-voiced effect of a large French orchestra in miniature.

Yet Leclair’s background both as a French musician and dancer seems also to have engendered a rebellious trait: one of the most interesting features of the Op 5 set is Leclair’s subtle approach to phrases which often positively seems to subvert the classical regularity of the French style. This is evident in the Vivace of Sonata No 3 where the fugal imitation sets up the expectation of regular phrases yet the endings of lines are quite unpredictable. The overlapping of lines is particularly interesting in the Ciacona ending Sonata No 4: here the melodic lines start their material two beats before the ground bass begins and the idea of overlapping is extended by the interplay between violin and cello (this is the only movement in the set with an independent cello part).

Leclair’s Op 5 sonatas are ‘modern’ in two senses: that of being ‘up to date’ by the standards of the day and that of showing signs of a sophistication that would be expected more in a later age. The up-todate elements inhere largely in the galant nature of the writing, most strongly evident in the folklike simplicity of the Tamborin closing Sonata No 10. Also typical is the rather large range of note-values and motifs presented within any one movement (such as in the first Allegro of Sonata No 4); this would sound cluttered by Baroque standards but had become very fashionable by the 1730s. Such an emphasis on small-scale contrast and a constant ‘quasi-realistic’ change of affect would become an essential foundation of the Classical style later in the century. One larger-scale device of contrast of which Leclair seems particularly fond is that of major and minor modes, for example in Sonatas 3 (Aria grazioso), 4 (Ciacona) and 6 (Gavotte).

Where Leclair goes beyond the fashions of the day is in his developing of the art of combination well beyond the basic Italian-French synthesis of his age. The Gavotte of Sonata No 6 preserves the basic metrical structure of the French dance, but combined with Italianate bowing patterns and the sense of a lyrical line; furthermore, the movement often gives the impression of an almost continuous moto perpetuo of quavers that sometimes seems to belie the periodic nature of dance. The Allegro assai of Sonata No 10 begins as a French-accented Italian Allegro typical of the Baroque but it soon emerges that the material is to be developed in the manner of a dramatic narrative; thus the movement comes very close to the Classical sonata style, complete as it is with a murky central section, a somewhat disguised return of the opening gestures and an increase in tension towards the end. Leclair’s awareness of the listener’s expectations is also evident in the Allegro of Sonata No 11: here the opening sounds characterful and memorable enough when we hear it at the outset, yet when it returns at the repeat of the first section and at the beginning of the second it sounds like a new idea, so seduced have we been by the continuous semiquaver movement in the meantime. Here Leclair almost reverses the rules of musical rhetoric by actually causing us to forget themes rather than cultivating our memory.

Sonata No 11 is also interesting for its ambiguity of style and idiom. It opens with what sounds like a lyrical aria for violin, yet the bass line and binary form evoke the accompaniment to a dance of a character somewhere between the grace of a Siciliano and the animation of a Gigue. Here we have a sort of stylistic counterpoint that verges on heterophony. Whether by chance or design, the last two movements of the sonata are a Siciliano and a Gigue which seem somehow to resolve the ambiguity and realize the stylistic potential of the first movement.