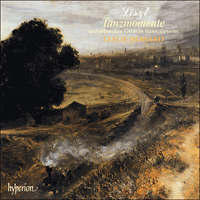 and other rare German and Austrian transcriptions

Liszt's sheer industry is one of his most daunting characteristics; his enthusiasm, indeed his voracious appetite, for music of all sorts and conditions—whether as composer, conductor, pianist, teacher or transcriber—remains unparalleled.

The transcriptions featured on this disc are of works whose composers have faded almost entirely from recognition, yet Liszt never fails to imbue their compositional efforts with his own inimitable sparkle and flair.

Since 1985, Leslie Howard has been engaged on the largest recording project ever undertaken by a solo pianist—nothing less than the complete solo piano music of Liszt, a project which will total some eighty discs on the Hyperion label. By the end of 1995, Howard has completed 56 of these and been awarded a Grand Prix du Disque for no fewer than five volumes of the series.

‘Leslie Howard's survey of the whole of Liszt's piano music is disclosing marvels, played with magisterial perception and unfaltering virtuosity; his notes to each record are an enlightenment in themselves … Vol 37 is a record not only to which lovers of Liszt can return, but which should give pleasure to those who may never have heard of some of the composers transcribed but enjoy the minor, overgrown paths of the nineteenth century’ (Gramophone)
‘Here is a pleasant hour-plus of mid-century memorabilia for the general listener, teasing fare for the musical anatomist, and another indispensable album for the collector … as befits such a program, Howard's graceful, extensive notes are full of quaint and curious lore. Hyperion's sound is spaciously, transparently immediate. Recommended’ (Fanfare, USA)
«On sera étonné par la suprême droiture du compositeur, traitant des mélodies de Herbeck ou Lassen avec la même science que celles de Schubert» (Diapason, France)

Liszt’s sheer industry is one of his most daunting characteristics; his enthusiasm, indeed his voracious appetite, for music of all sorts and conditions—whether as composer, conductor, pianist, teacher or transcriber—remains unparalleled. Even in an age of musical rediscovery of many a recondite composer, the works of the present gathering of minor nineteenth-century Germans and Austrians remain quite untrammelled, but Liszt, partly out of friendship for his colleagues, and certainly with the desire to help proselytize their work, did his best, by linking his name with theirs, to raise public awareness of their music. As ever, Liszt did none of this work for his own personal gain, even at such times in his later years when his assets became much reduced.

Johann Ritter von Herbeck (1831–1877) was an important figure in the Viennese musical life of the day, with a zeal for the new music of Liszt, Wagner and Bruckner, as well as for the rehabilitation of the unknown Schubert. Liszt’s dealings with him relate particularly to Herbeck’s position as choirmaster of the Männergesangverein in Vienna, and Liszt’s first setting of the Mass in an arrangement for men’s choir and wind orchestra, prepared by Herbeck in consultation with Liszt in 1859. Herbeck’s Tanzmomente for orchestra was published in 1868 as his Opus 14, and Liszt’s piano transcription appeared the following year. The influence of Schumann is clear in the music, but there is also an obvious kinship with the dance music of the Strausses. The work consists of eight dances, mostly in waltz form, the last of which is on a much grander scale than the others. Liszt’s delicate transcriptions mirror the winsome innocence of the originals. He allows himself some liberties in the fourth piece—extending many phrases to five bars from four—but the alternative version offers a more regular arrangement. But in the final piece Liszt develops the work into a real waltz-fantasy. The whole set, like the Bunte Reihe of Ferdinand David (in Volume 16) deserves to be much better known.

We have already encountered the music of Eduard Lassen (1830–1904) in Liszt’s arrangements of some of his incidental music (in Volume 18: ‘Liszt at the Theatre’). This Belgian-trained, Danish-born composer settled in Weimar in 1857 when Liszt took on the production and performance of his first opera (Landgraf Ludwigs Brautfahrt, originally Le roi Edgard), and he remained there as Liszt’s assistant and eventual successor. Nowadays only a few songs remain on the fringes of the repertoire. The works of Lassen which Liszt transcribed suggest that there may be more of his music worthy of exploration, and the song transcriptions in particular indicate an interesting musical personality. Liszt first transcribed Löse, Himmel, meine Seele (‘Heaven, save my soul’) in 1861, and captured, as did Lassen before him, the most palatable aspects of this rather hot-house poem (by Peter Cornelius)—a prayer for love and for understanding of the world’s joys and for deliverance from being turned to dust. (Incidentally, it is this version which currently is in print in Peters Edition, despite their inaccurate dating and presumption that it is the later version.) In the later version Liszt extended the introduction and replaced the music of the final verse and climax for publication in 1872 alongside the newly-transcribed Ich weil’ in tiefer Einsamkeit (‘I remained in deep loneliness’)—another much-dated poem: the poet sings of his love to a portrait of his beloved recollecting happiness amidst present loneliness. The setting moves with magisterial restraint, and the change to the major key in accordance with the poem’s reminiscences is memorable. Liszt’s transcription exists in two manuscripts which exemplify clearly his care in making such arrangements: the earlier has many corrections, and a paste-over where Liszt’s happy second thought was to extend three bars in the last verse from 4/4 into 6/4 time. Although this MS is obviously ready for the engraver, with text underlaid, and all dynamics, fingerings and other performance directions in place, Liszt made a neater fair copy, signed ‘FL Juin ’72’, in which he made a last-minute inspired change of one note in the coda from E sharp to E natural.

The great conductor and pianist Hans von Bülow (1830–1894) is little remembered as a composer, although he had quite some success in his day. As a performer he was as adept at Wagner and Liszt as he later became with Brahms; as a composer he was overshadowed by all of the composers he admired. His music is conservative by nature, but the influence of the new music is apparent; his interpolation in the 1884 edition of Liszt’s Concerto pathétique for two pianos recalls the musical language of Tristan, whilst much of his surviving piano music is of a lighter nature. (Liszt arranged one of his piano pieces—the Mazurka-Fantasie for orchestra—in 1865.) Sadly, history recalls him most readily as having been married to Liszt’s daughter Cosima and being cuckolded by Wagner, an episode which brought von Bülow much public ridicule, and which caused a rift between Liszt and Wagner for some years. Sadly, von Bülow’s pleasing song Tanto gentile e tanto onesta never entered the repertoire, Liszt’s enthusiasm for it notwithstanding. The piano transcription is simple and straightforward, and the original song a worthy setting of Dante Alighieri. (‘My lady is so gentle and modest when she greets others that every tongue trembles and is still, and eyes do not dare to look upon her.’) Both works merit revival.

Die Gräberinsel der Fürsten zu Gotha is the first of Liszt’s efforts to promote the music of Crown Prince Ernst, later Ernst Herzog zu Sachsen-Coburg-Gotha (1818– 1893), although it was not published until 1985. (Liszt’s Jagdchor und Steyrer aus der Oper Tony and his Zweite Festmarsch are both based on themes from Duke Ernst’s operas—see Volumes 6 and 29 of the present series.) The subject of the poem (by Apollonius von Maltitz) is the island in the lake on the estate of Gotha which the Duke’s family had had constructed especially as the site for the family tombs. The original song is the second of a set of seven, all now enshrouded in that particular dust reserved for the compositions of amateur royals. Liszt actually made his transcription whilst staying as Ernst’s guest at the Coburg estate on 6 November 1842, and he probably played it in a recital at the Gotha estate three days later. A minor work by an aristocratic dabbler it may be, but Liszt lends it a good deal of musical substance by his serious approach.

The second version of the Élégie sur des motifs du Prince Louis Ferdinand de Prusse has already appeared in this series, in Volume 4. The earlier version is full of interest in its different treatment of the same material. The structure of the piece is Liszt’s, and although the themes stem from another noble dilettante, Prince Louis (1772– 1806) was far more distinguished a musician than Duke Ernst. However, Liszt’s piece has always been catalogued as an original work rather than a transcription, so much has he woven the original melodic ideas into a new conception. (The opportunity must be seized here to correct a blunder in the note to the revised version of this piece in Volume 4. Prince Louis was killed in battle, and never married. The Princess who gave Liszt the volume of Louis’s music was not his wife, but was married to his nephew who succeeded to the title.)

Otto Lessmann (1844–1918) was better known in his day as a journalist, a theatre manager and a producer than as a composer, and he probably composed the three Tannhäuser songs for a dramatic production of Julius Wolff’s play. The first—Der Lenz ist gekommen (‘Spring is come’)—is a typical song of the spring, simple and strophic, which Liszt treats in his familiar way as a theme and variations, but he extends the ritornello at the end of each verse and the reflective coda is echt late Liszt. It is a pity that Lessmann’s music to the Trinklied (‘Drinking Song’), although full of theatrical humour, is not quite as amusing as the poem, which is seriously dedicated to all that flows, red or white, calls down pestilence upon anything dry, and muses on the fortification alcohol provides equally for love and hate. Liszt makes the middle section (which contains a somewhat disconcerting premonition of Grainger’s Country Gardens) much too awkward for the piece to have any prospect of general revival. Du schaust mich an (‘You look at me’)—the beloved looks at the poet with unspoken questions—is a splendid love-song the original of which ought to make a good encore at a Lieder recital, and Liszt’s transcription rekindles an ardour which harks back to his most fulsome mid-life Romanticism.

The first publication of the last piece in this recital reads: ‘Le célèbre Zigeuner-Polka de Conradi pour le piano par F. Liszt’ and advertises an orchestral version (Conradi’s original) and a facilitated piano version (not by Liszt). The idea of any music by August Conradi (1821– 1873) being ‘celebrated’ strikes one as a bit odd today, but Conradi, who for a time acted as Liszt’s musical secretary and amanuensis and carried out some orchestrations of Liszt’s works under Liszt’s instructions, was a prolific and successful composer in his day, especially with his lighter orchestral works—although he wrote operas, symphonies and much other more serious music, all quite forgotten now. He wrote the Zigeuner-Polka in 1843, and it had certainly become popular before Liszt transcribed it. Apart from the introduction and coda, and one or two transitions, Liszt’s version makes no attempt to improve Conradi’s structure, which is really just a succession of short dance tunes joined together without much in the way of reprise. As one might expect, the Hungarianisms are accentuated by Liszt in his added passages, which are a good deal less tame than Conradi’s agreeable four-square tunes.